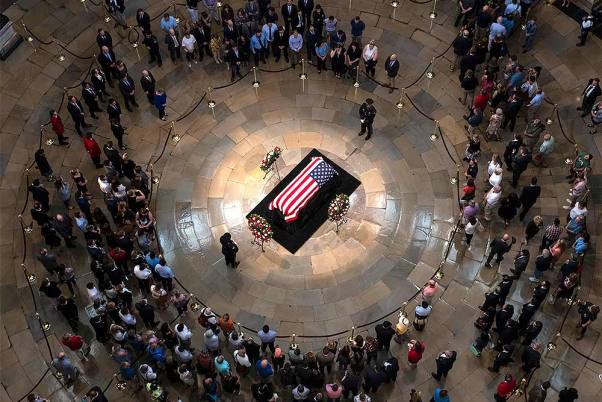 Members of the public walk past the flag-draped casket bearing the remains of John McCain of Arizona, who lived and worked in Congress over four decades, in the U.S. Capitol rotunda in Washington. 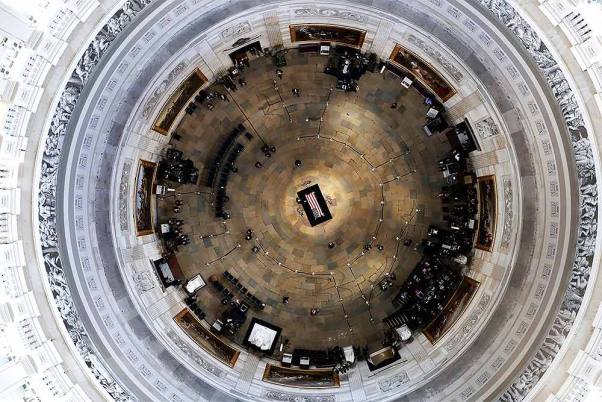 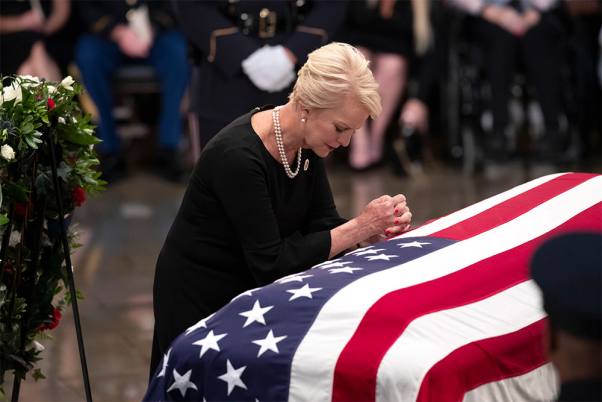 Cindy McCain, wife of Sen. John McCain, R-Ariz., leans on his flag-draped casket during a farewell ceremony in the U.S. Capitol rotunda in Washington. McCain was a six-term senator, a former Republican nominee for president, and a Navy pilot who served in Vietnam, where he endured five-and-a-half years as a prisoner of war. He died Aug. 25 from brain cancer at age 81. 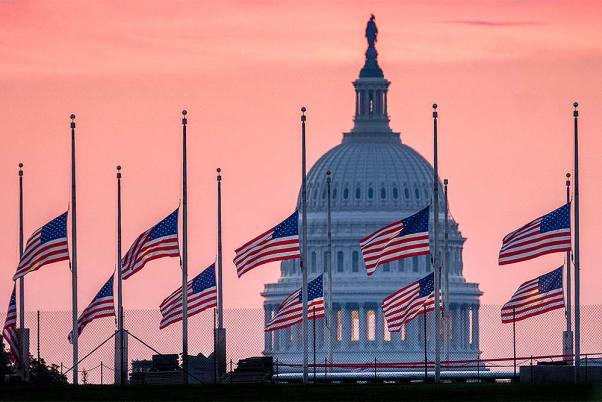 Flags flying a half-staff in honor of Sen. John McCain, R-Ariz., frame the U.S. Capital at daybreak in Washington. McCain, 81, died at his ranch in Arizona after a yearlong battle with brain cancer. 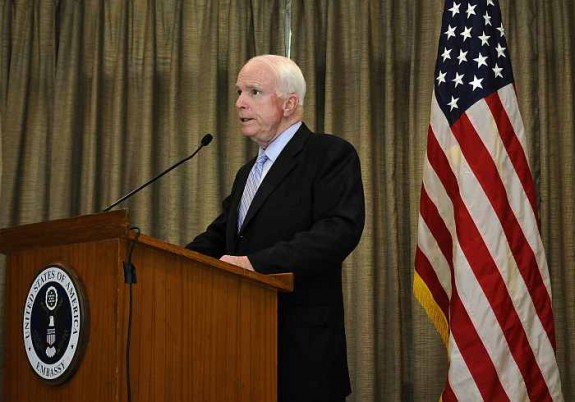 U.S. Sen. John McCain addresses a press conference in New Delhi. McCain is on a five-day visit to India. 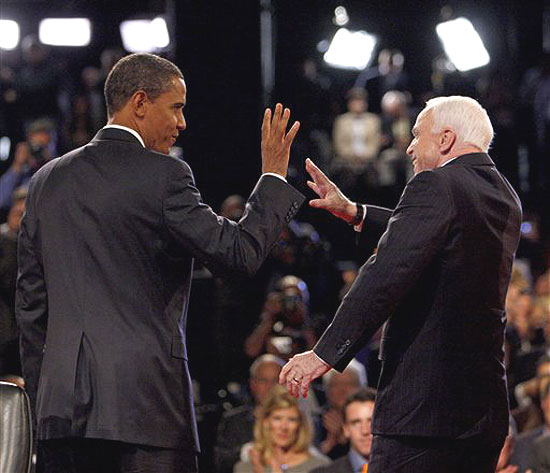 The third and final American Presidential Debate was certainly the last occasion Sen. John McCain had to try and reduce the 8-point lead his rival has over him and he decided to play hardball against Sen. Barack Obama. But he clearly failed, as most polls gave Obama the thumbs-up after the debate. Perhaps the most dramatic moment in the debate was when McCain turned to Obama and said, "I am not President Bush" and added, "If you want to run against President Bush, you should have run four years ago." But Obama got the better of McCain when the latter said that voters need to "know the full extent" of Obama's relationship with Bill Ayers, a former 1960s radical who belonged to the Weather Underground. "Mr. Ayers is not involved in this campaign, he has never been involved in my campaign, and he will not advise me in the White House," Obama said. He then went on to say that Ayers had committed "despicable acts" 40 years ago, but pointed out that he himself had been 8 years old at the time. He said that Ayers has become the "centerpiece" of McCain's campaign and, turning to his opponent said, that his persistence in bringing Ayers up "says more about your campaign than it says about me." 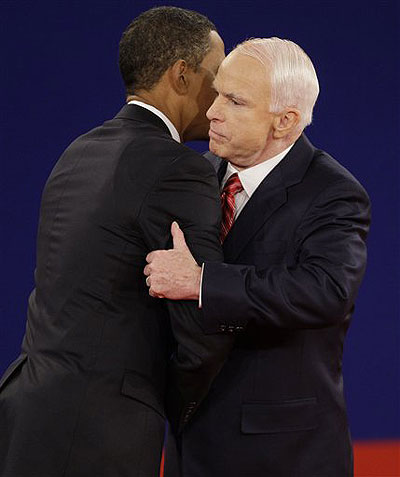 Tuesday October 7, 2008It was Debate #2. But the White House hopefuls stuck to their stated positions on combating terrorism. "If we have Osama bin Laden in our sights and the Pakistani government is unable or unwilling to take them out, then I think that we have to act and we will take them out," Obama, the 47-year old senator from Illinois said. "We will kill bin Laden. We will crush Al-Qaeda, that has to be our biggest national security priority," he vowed. McCain accused Obama of announcing a war on Pakistan and cited former US president Theodore Roosevelt's famous statement that the commander-in-chief should "talk softly, but carry a big stick." "Senator Obama likes to talk aloud," the 72-year-old said. "We need to get them to work with us and turn against the Taliban and others... By coordinating our efforts together, not threatening to attack them." Obama, was clear, and would undoubtedly please the hawks in India: "I do believe that we have to change our policies with Pakistan.  We can’t coddle, as we did, a dictator, give him billions of dollars and then he’s making peace treaties with the Taliban and militants." 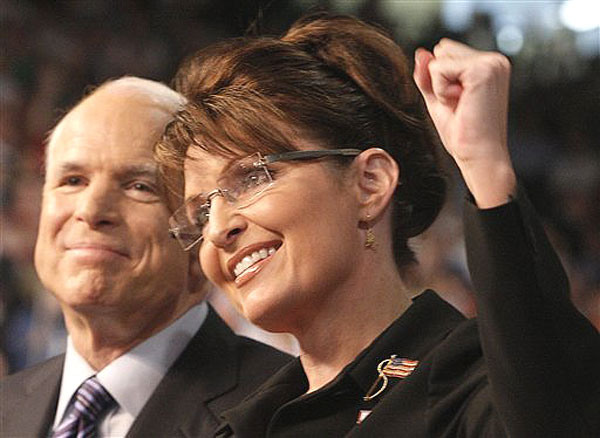 Friday August 29, 2008
If the Democratic vice presidential candidate had been a surprise -- and a cynical choice, as many had charged last week which also saw the Democratic convention where Barack H Obama was formally announced as official nominee -- this week saw the biggest surprise in the announcement of Alaska governor Sarah Palin as the vice-presidential running mate for Republican presidential candidate John McCain. The timing was considered a master-stroke as it shifted the news feeding frenzy away from Obama's speech at the Dem convention and was seen as an attempt to lure undecided women voters who still have a lingering Hillary hangover. The youthful mother of five whose placement on the ticket was meant to reinforce traditional values -- she is anti-abortion, anti-evolution, anti-contraception, pro-gun, pro-Creationism -- went on to later reveal that her unmarried teenage daughter is pregnant. Meanwhile, the Democratic veep candidate when asked to comment on his 44-year old opposite number said: "There's a gigantic difference between John McCain and Barack Obama and between me and I suspect my vice presidential opponent." And then he paused for the punch-line, only to add: "She's good looking." 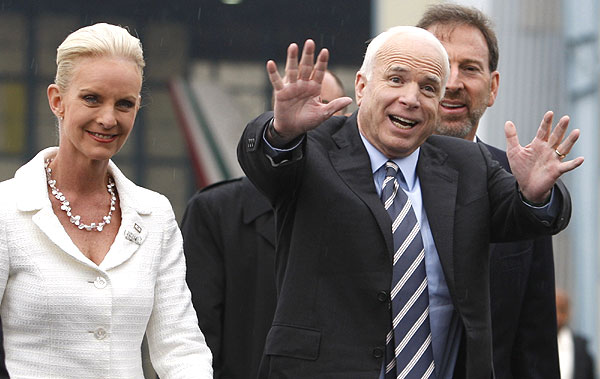 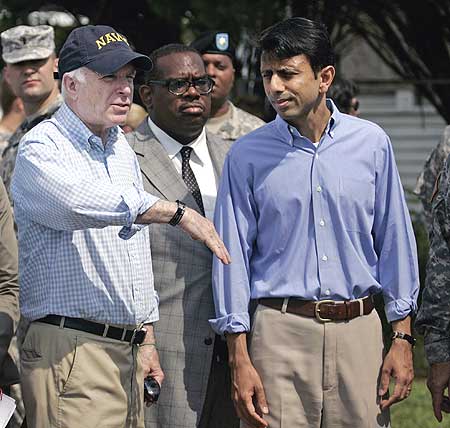 Will McCain pick Jindal as his running mate? The speculation heats up in the US press. And plenty of reasons are being advanced for McCain to take a serious look at Jindal. Running with the 36-year-old Jindal would “implicitly acknowledge” the concerns some voters have about McCain’s age (71). The message would be that of a generational change which McCain-Jindal can offer without risking a liberal and inexperienced Obama as commander-in-chief. 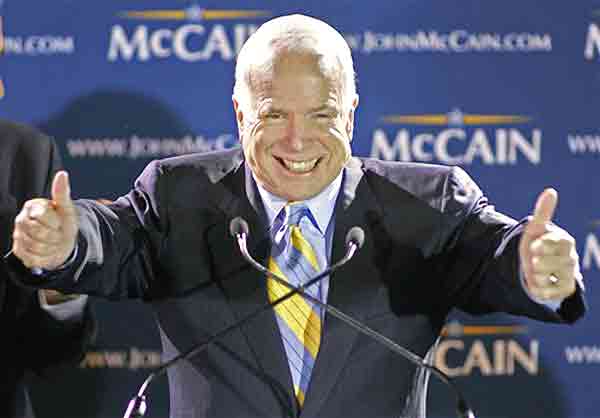 Farmers hold a banner as they celebrate after the...