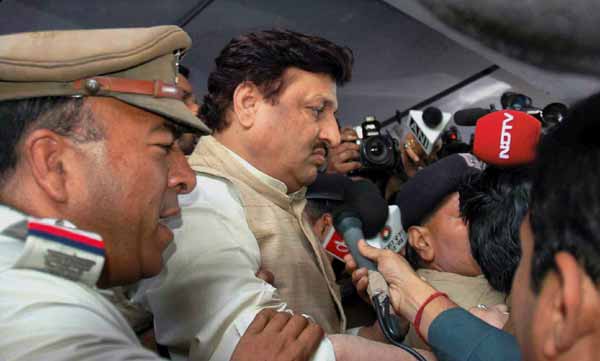 It was a day of justice finally catching up, with courts across the country awarding life sentences to as many as 60 convicts.
Founder-leader of the banned Al-Umma, S A Basha, and its general secretary, Mohammed Ansari were among 31 convicts who were sentenced to life terms for the Coimbatore blasts that killed 58 persons on February 14, 1998, in the conspiracy to eliminate Advani during his visit to the city.
In Kanpur, 15 persons including a lawyer were sentenced to life by a local court for burning nine persons to death in the communal riots that broke out after the demolition of the Babri Mosque in December, 1992.
A trial court gave life terms to suspended ACP S S Rathi and nine other policemen, convicted for killing two innocent businessmen in a fake encounter at Connaught Place ten years ago.
Amarmani Tripathi,a former Uttar Pradesh minister and now a Samajwadi party MLA, was convicted in the murder of poetess Madhumita Shukla and sentenced to life imprisonment (shown in pic) along with his wife Madhumani and two others. Amarmani's cousin Rohit Chaturvedi and contract killer Santosh Rai were the other two convicted.