'We Must Now Choose'

A lecture on "India's changing geopolitical environment" at the Changing Asia series of Lectures held recently in New Delhi...

Nehchal Sandhu is appointed to the National Security Council Secretariat in charge of internal security.

The foreign secretary on whether he sees a shift in US policy on J&K in the light of recent statements by William Burns, US Under Secretary of State and on the PM's visit to Yekaterinburg to attend SCO and BRIC Summits 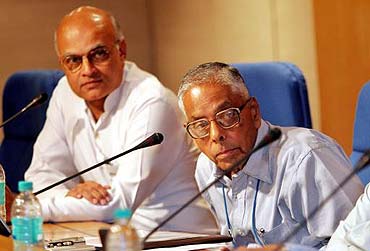 'Not The Best, But A Very Good Deal'

Or so the NSA had been quoted as saying, but he clarifies that the commitments made by the PM to Parliament "are fully safeguarded "as far as this text is concerned.

Still Some Distance To Travel

'There were several issues which were still open ... We have managed to remove some from the table. We still have a few issues left where there is some distance for us to travel,' says the foreign secretary. Obviously, the right to reprocess spent f