...and the fine art of selling dhoklas and theplas

The Beginning Of Imagination

This speck of dirt, too, will be sucked into the widening gyre of time that keeps turning and turning...

'The Storm In The D’Cruz Ocean'

If the Ambedkar-conceived Constitution can be amended 97 times, can’t a textbook, which has to be treated as a work-in-progress, be amended?

Between Red And Blue

On Anand Patwardhan's latest—the tension and the potential inherent in the title, that of twinning the concerns of the Ambedkarite movement (Jai Bhim) and those of the Left (Comrade), and the apparent impossibility of such reconciliation. 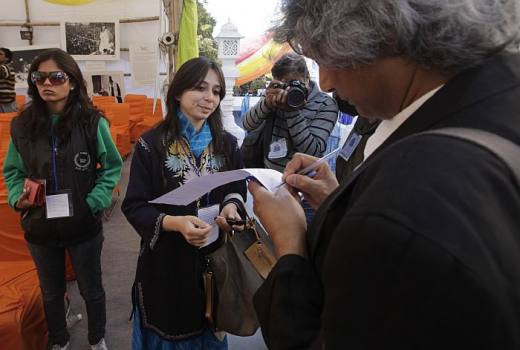 As writers organise for the ban on The Satanic Verses to be lifted, the battle to undo the damage of the past quarter century has begun. It is time for India to wake up.

The supply of uranium has been assured by Russia, but NPCIL's plans for massive water-dependent reactors off Kanyakumari may run out of water. Literally.

Kanshi Ram redefined and expanded the scope of parliamentary democracy in India by successfully fusing Phule's advocacy of the bahujan with the Ambedkarite idea of negotiating space for a communal minority in a political majority.

The DMK front may form the government, but the real winner of the Tamil Nadu election appears to be Vijaykanth, an actor known as the poor man's Rajnikanth. Updates

With elections just four months away, as the Sun TV group proves to be bigger than the DMK, media power appears to dictate the course of politics in Tamil Nadu.

'The Worst Tsunami Could Trigger A 15m Wave In Gujarat'

The vice-president of The Tsunami Society, Honolulu, and an expert on tsunamis, storm surges and tidal waves, on the various challenges that the Indian Ocean Tsunami Warning System poses and the need for coastal inundation maps.

The Fizz Of Child Labour

In the guise of celebrating team spirit, the latest Pepsi advertisement on TV romanticises child labour and offers it celebrity endorsement. Perhaps the Advertising Standards Council of India needs to step in?

On the eve of 125 years of Periyar E.V. Ramasamy, K. Veeramani, president, Dravidar Kazhagam discusses caste politics, and explains why the DK does not believe in having dalits as puppets in its apex decision-making body.

In Tamil Nadu, elections mean thiruvizha. It is spectacle time. And J. Jayalalitha is the reigning goddess who has set out on a two-month darshan-giving tour. S. Anand followed her in Chidambaram and Mayiladudurai.

With Karunanidhi declaring that the BJP-AIADMK alliance is basically an Advani-Jaya alliance, it appears that realignment with "Vajpayee's BJP" is possible in a post-poll scenario. 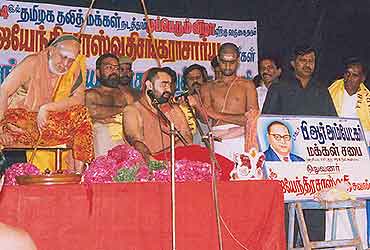 The Kanchi Shankaracharya, last heard questioning the Dalai Lama's credentials to mediate in the Ayodhya dispute, now has the political circles abuzz with his peregrinations in the slums of Chennai. Tamil Nadu's top Dalit leaders are already lining u

Why did the DMK - which now is both 'secular' and 'communal' - pull out of the NDA now? What happens to the alliance scenario in 2004? Questions, questions, and actually some more questions. More Covera

'Irrespective of whether we reach the conclusion that A-1 [Jayalalitha] is guilty of the offences with which she is charged or not, she must atone for the same by answering her conscience in the light of what we have stated'

Vehicles covered in snow after a fresh spell of snowfall at Keylong in Lahual Spiti.

Union Minister of Ports, Shipping, Waterways and AYUSH Sarbananda Sonowal during his visit to Bogibeel Bridge in Dibrugarh.