I wasn't in possession of a city guide; I didn't want to Google; I was reluctant to be a tourist... I got into a taxi in Ballygunge and simply told the driver to take me to Tagore's home...

And now pressure mounts on the government to bring back 12 paintings by Rabindranath Tagore, set to be auctioned by Sotheby's at London on June 15, 2010

The idea of an unbroken Indian tradition is probably an Orientalist invention. The 'Orient' itself comes into being in the early period of colonialism, and one of the earliest writers to perceive its great cultural, emotional, philosophical, and pol 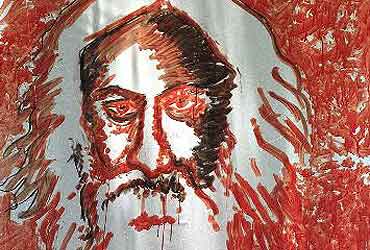 The Poet And The Prize

If it took petty pilferers to awaken us to what Tagore's Nobel Prize medallion means to us and our national identity, it is as good a time as any to explore Tagore's relationship with the Nobel and to reflect on what the prize meant to him.

Are we dreaming? No, just paying a tribute to the poet on his 139th birth anniversary.