Yellow Metal Back In Black 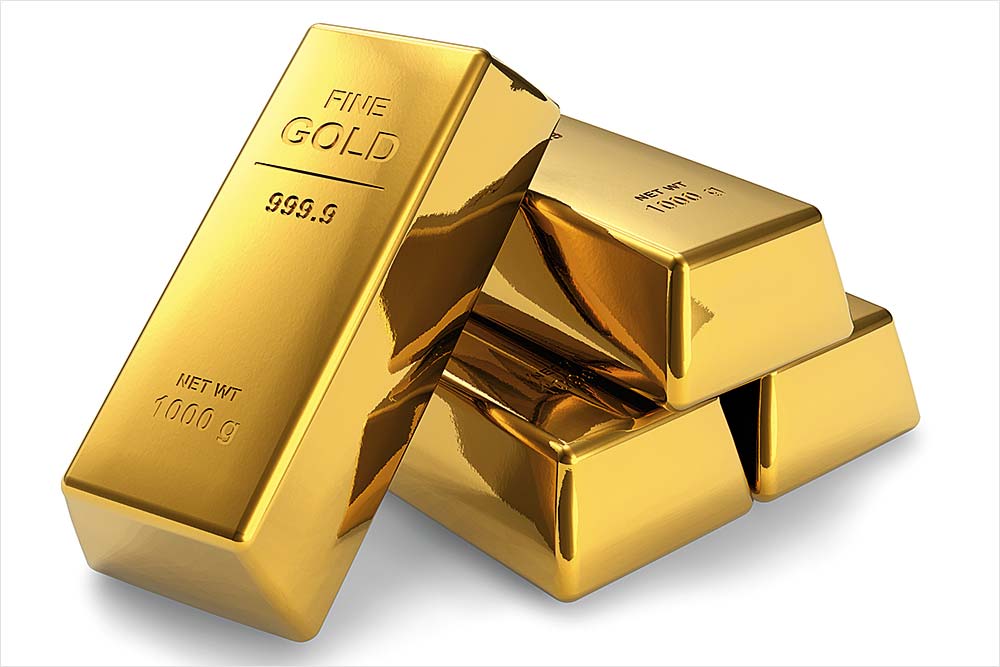 The revival trend seen in most major global economies had initially stolen the glint off gold. The yellow metal slumped to $1,675 in international markets with investors regaining their risk appetite and stepping out of the safe haven. But the gold prices rebounded quickly to trade a shade below the recent highs. The prices soared past $1,900 per ounce in the first five months of 2021 and gained roughly $197 per ounce, or 11.55 per cent, in the last two months.

What drives this rally in gold prices? A critical factor is the rise in US inflation to 5 per cent in May from 4.2 per cent in April – the highest since the global financial crisis of 2008 – while the core consumer prices climbed a steeper 0.9 per cent in April. The inflation bug has also bitten other economies, including India, making investors risk-shy yet again.

The Federal Reserve sees inflation as a temporary phenomenon. Huge fiscal stimulus and the US central bank’s inflationary policies have damaged America’s anti-inflation credibility, though many economists and traders think inflation might be sticky this time.

In years when inflation surpassed 3 per cent in the US, gold price surge averaged 15 per cent. Over the past two months, inflation stayed past the benchmark 3 per cent level and gold outperformed by 10 per cent.

The US labour market has shown tentative progress in private hiring  but the economy still needs to add around 76 lakh jobs to return to the pre-pandemic level. Non-Farm Payroll (NFP) data missed the May estimate as labour participation rate inched lower. People are unwilling to return to work due to pandemic, unemployment benefits and lack of child care facilities. At this rate, the US economy is a long way off the desirable employment scenario. 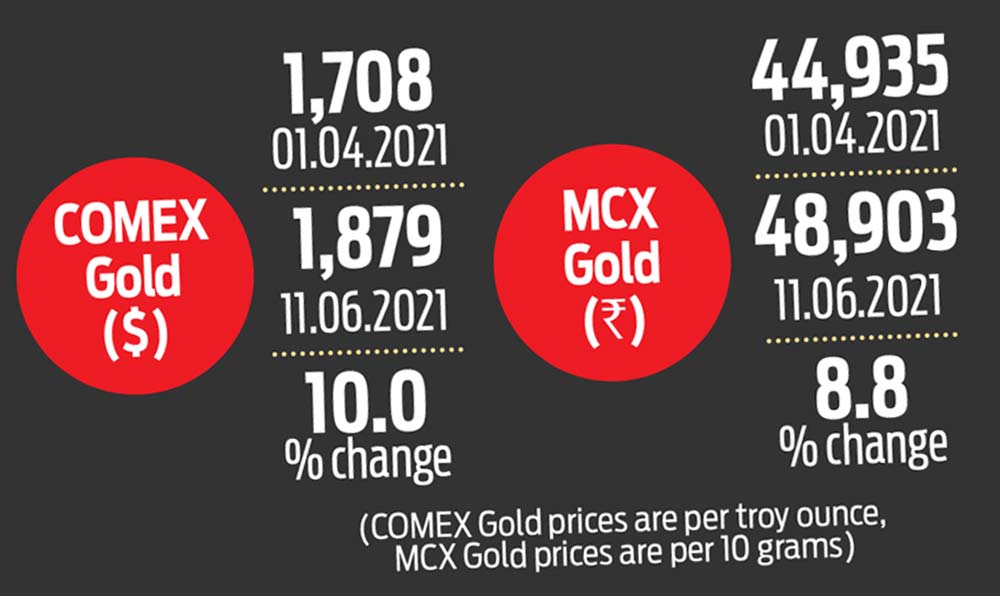 Another factor that favours the gold rally is instability in cryptocurrencies. The trillion-dollar infrastructure bill of President Joe Biden, coupled with the policy rate of 0-0.25 per cent, will add to the downside pressure on the US dollar.

It’s not just the metallic gold, even gold-backed exchange traded funds (Gold ETFs) see fresh inflows after five months. The World Gold Council (WGC) data showed inflow of 61.3 tons in May. This is the highest since the September 2020 inflow of 68.1 tons. Globally, gold-backed ETF assets under management stood at 3,628 tons, falling 7 per cent behind the October 2020 high of 3,908 tons.

ETF holdings do not affect the prices directly, but surely influence  the overall sentiment in the market. In 2020, ETF inflow for the metal was quite significant, although with the selloff in prices, there was an outflow as well. With rising prices, investors have showed their confidence in the commodity, justifying the resumption of ETF-bound inflow.

“Although the US economy is on a strong growth trajectory, it is contingent upon government stimulus and the cushion that it puts under the financial sector. The bond market is easing once again despite the unsettling inflation data as the yields retreated to 3-month-low of 1.45 per cent from 1.75 per cent touched in March. It appears that the market participants have slowly started putting faith in the accommodative policies of the US Fed. It is a dollar-negative development,” says Praveen Singh, AVP, Fundamental Research – Currencies and Commodities at Sharekhan by BNP Paribas.

The most important factor supporting gold prices is negative real interest rate in the US. The real rate in the US hovers on minus-5 per cent, reducing the cost of holding gold and the opportunity cost. Historically, gold has always done well whenever the rates have turned negative.

“We remain positive on bullion. We look for higher prices in the coming quarters. We stick to our long-term target of $2500. In next two-three quarters, it is likely to scale fresh highs,” says Singh.

Talking of gold back home in India, Nish Bhatt, Founder and CEO of Millwood Kane International, says that the metal is trading 10-12 per cent lower than the all-time high seen in August 2020. “We expect gold prices to trade range-bound in the near term,” he says. 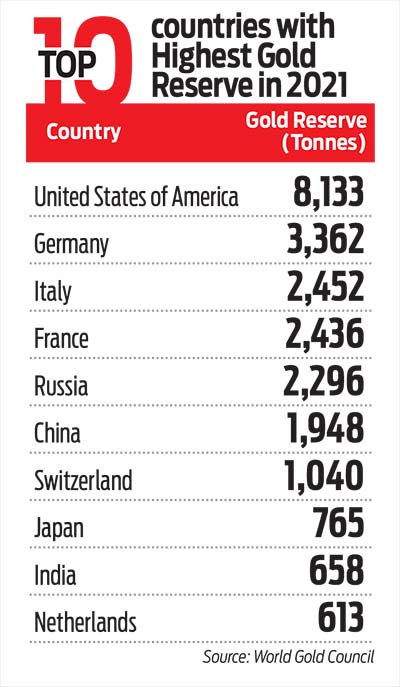 Over the past one-month, crude oil (Indian Basket) traded above $70 a barrel. The rise in crude prices could increase India’s inflation and import bills as well and, in turn, widen the country’s trade and current account deficits.

“Any further increase in crude oil prices and any rise in dollar index may put downside pressure on the rupee in the coming days. Any further depreciation of the rupee against the dollar may support the MCX Gold price on the higher side in the coming months,” says NS Ramaswamy, Head of Commodities, Ventura Securities.

Another reason for the gold prices to rise in 2021 is also the volatility witnessed in the industrial metal. The central banks’ continuous interest in increasing their gold reserves has also kept the overall sentiment high, analysts believe. “Increased inflationary pressures as a result of unprecedented levels of stimulus injected into the global economy as well as expectations that the interest rates will remain close to zero for a longer period provided support to bullions,” says Navneet Damani, VP – Commodities Research at Motilal Oswal Financial Services Ltd (MOFSL).

Since the greenback is the most usual medium of trade for the commodity, the dollar index is a major cue for gold prices. The pickup in economic growth across the world and liquidity scenario will also guide gold prices at the macro level.

“The dollar index has taken a strong support at 89.0 levels and from there it has bounced back (it is currently trading at 90.50). We may see downside movement in the dollar index only if it breaks below 89, on a weekly basis, otherwise we can expect reversal trend from here,” says Ramaswamy.

Increased optimism for the US economic growth, vaccination success in other nations, positive economic data, comments from Fed officials allaying inflation fears have weighed on the metal price. Market participants also expected comments from the Fed governor on changes in the current policy and liquidity measures. This too added to the pressure on the metal prices.

There are, however, tailwinds that make us believe that precious metals will be stronger, of course with bouts of corrections. Rising inflationary expectations, increasing debt, central banks’ relaxed monetary policies, stimulus packages, geo-political uncertainties and other factors will continue to keep the metal prices supported, Damani says. “We continue to maintain our positive bias on gold for the short-to-medium-term perspective targeting new life-time highs towards $2,050 followed by $2,200,” he says.

A Rising Force On Icarus Dreams

The Hidden Treasure In Hobbies