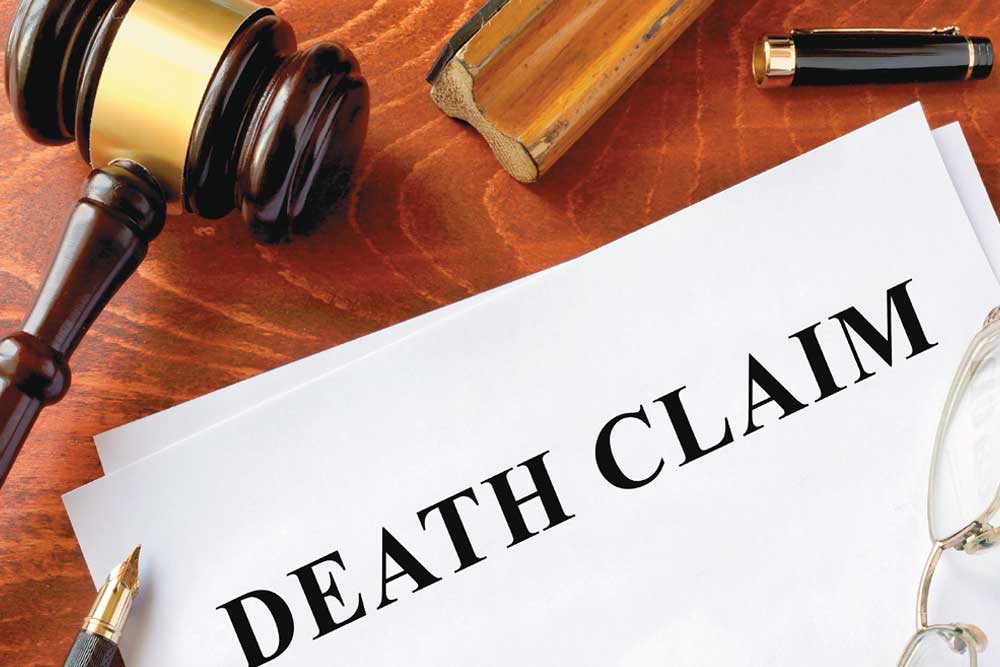 Our family’s future tops our concern list. Unforeseen events will never arrive with prior notice. Therefore, it is best that we do the needful to secure our dear ones from financial troubles. Having said that, the question might naturally arise, how can their future be secured given the vast array of investment plans available? The answer is simple. Over time, life insurance has emerged as one of the most popular options to help us in achieving financial security for a family in the event of any unfortunate death or critical illness. And, depending on the requirements, one can choose from a wide range of life insurance product to provide adequate financial protection to their family in case of any eventuality.

The common type of claims in life insurance is maturity or survival benefit claim and death claim. A survival claim can also be described as benefit derived by the insured at the time of completion of policy tenure. In case of money back policies, the insured also receives a certain pre-determined amount at regular intervals during the tenure of the policy. A survival or maturity claim can only be claimed if the insured is alive till the end of policy tenure. The claim, which could be a certain percentage of the sum assured, will be paid to the insured after maturity, regardless of the health conditions of the insured. The policy will cease to exist after maturity. Before a policy reaches maturity, the insurance company generally sends notification to the insured along with a discharge voucher two-three months ahead of the date. The notification would also include the amount payable at the time of maturity of the policy.

The insured or policyholder in such a case can sign the discharge voucher and send it to the insurer along with the original policy bond to process the claim.

Life insurance industry recorded a premium income of approximately `4.58 Crore during 2017-18 as against almost Rs41.8 Crore in the previous financial year, registering a growth of 9.64 per cent (14.04 per cent growth in previous year). In 2017-18, the life insurance companies had settled 8.28 Lakh claims on individual policies, with a total payout of Rs14,623.82 Crore. The number of claims repudiated or rejected was 9,286 for an amount of Rs532.21 Crore. During 2017-18, out of approximately 7.6 Lakh of total group claims payable, life insurance industry paid almost a total of 99.42 per cent claims.

But, what exactly is a death claim? It is basically a request to attain the life insurance benefits of a policy by designated beneficiaries after the demise of the policyholder.

When a policyholder passes away during the tenure of the policy or before the date of maturity, claim intimation should be sent to the insurance company at the earliest. The beneficiary or nominee under the policy or close relative should provide the information like the date, place and cause of death to the insurer to fulfill the formalities.

Most of the insurers adopted online claim settlement process for quick and hassle free service. Submitting all the required documents at once will also help to settle the death claim quickly.

At the time of claim, the insurer has the authority to investigate and pay the claim. Yusuf Pachmariwala, Senior Vice President and Head of Operations, Tata AIA Life Insurance, says, “Insurers deny claims only if it is established that the policyholder had entered into the contract through misrepresentation or non-disclosure of material facts or through fraudulent means. Every possible measure to prevent fraud in claims is taken.” 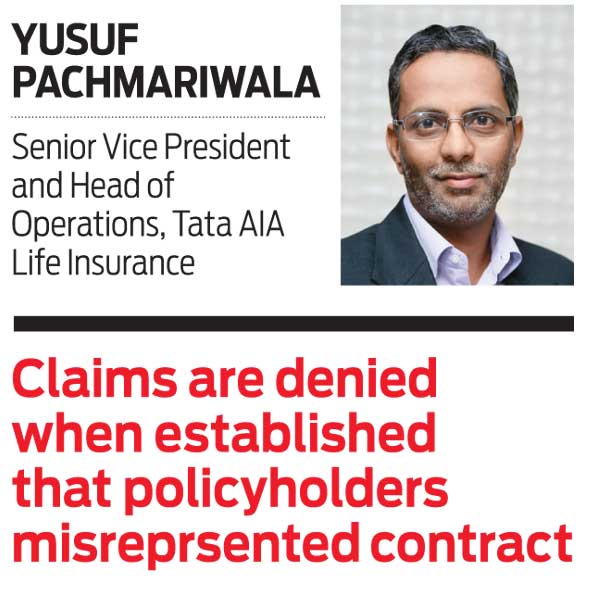 Insurers are now able to validate information provided by applicants through certified external sources that assist in making informed decisions. They also rely heavily on data analytics, predictive models and use the risk-management framework to identify potential cases of fraud at the time of sale of policy itself.

Most of the life insurers settle death claim at the earliest. However, in case of high sum assured and suspicious death claim, insurers can ask for an investigation in order to rule out foul play. Fraud claims affect overall claim ratio of the insurer.

Suicide: It is a common exclusion in life insurance policies. If the policyholder commits suicide within one year of policy inception, the claim will not be payable. But it varies from insurer to insurer if a death by suicide occurs after a year of purchasing or renewing the policy, in few cases the beneficiary will be compensated. According to the recent IRDAI regulations, in case of death due to suicide within 12 months from the date of commencement of risk under the policy or from the date of revival of the policy, as applicable, the nominee or beneficiary of the policyholder shall be entitled to at least 80 per cent of the total premiums paid till the date of  death or the surrender value available as on the date of death whichever is higher, provided the policy is in force.

Intoxication: If death occurs due to consumption of drugs or alcohol, then the insurance company might reject the claim.

Sexually Transmitted Diseases (STD): Most of the life insurers do not cover death of policyholder occurring due to any type of STD like HIV or AIDS.

Adventure sports: Most life insurance plans do not cover death due to adventure sports such as skydiving, hiking, car and bike racing, as they pose high risk to the life of insured and can result in  fatal accidents. However, few insurers do provide cover for such high-risk hobbies with riders or extra premium.

Pre-existing illness: If the cause of death is a condition that already existed at the time of purchasing the life insurance plan, then the insurer holds the right to reject  such death claims. 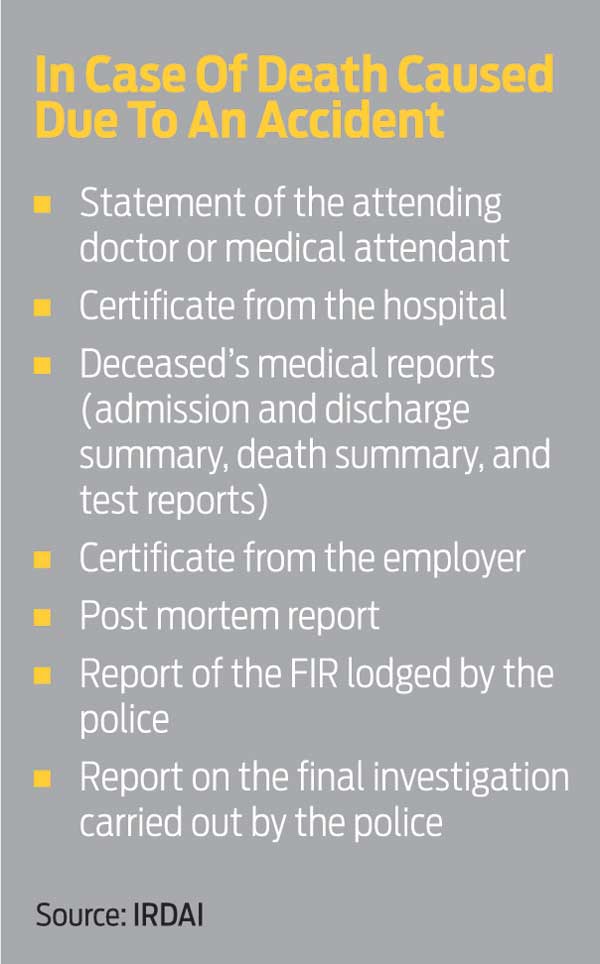 Natural calamity: If the policyholder passes away due to natural calamity, the insurer will not provide any coverage until and unless opted for any rider benefit for the same.

So, how can one proceed with claim settlement? The process will more or less be similar for most insurers, barring minor changes.

To ensure that you lose no time in filing a death claim, it is important to be familiar with the complete claim settlement process. Mentioned here are the basic steps of filing a life insurance death claim.

After the insurer has been duly informed about the policyholder’s death, the next step of the claim process involves submission of claim supporting documents. The nominee must provide documents, which have been requested by the insurer in support of the death claim. This is required if the death has occurred due to natural or accidental reasons.

After the insurer has received all the requested documents, the claim assistance team will begin assessing the claim. They will assess not only the claim, but also other things such as the supporting documents, nominee’s declaration and also verify the same. In some cases, the nominee may be asked to provide additional documents to support the claim further.

After the claims assistance team has reviewed the claim and related documents or evidence, they will make their decision to either approve or deny the claim. If the claim is approved, the insurer will proceed to settle the claim, which means that the sum insured will be paid to the nominee in the mode chosen by the policyholder. Life insurance claim payouts are mostly paid via Electronic Clearance Service. For this, the insurer will ask the beneficiary to submit their bank account details, a photocopy of the bank account passbook, and a cancelled cheque of the account.

To conclude, industry experts strongly recommend to go through the documentations thoroughly. It is important to be familiar with the terms and have a clear understanding of both inclusions and exclusions of the policy in order to avail the coverage and prevent any type of discrepancy during the processing of the death claim.

Is Cash Still The King?

Stay Tuned With MFs During A Stormy Ride