Wealth Creation in 2018: A Reflection 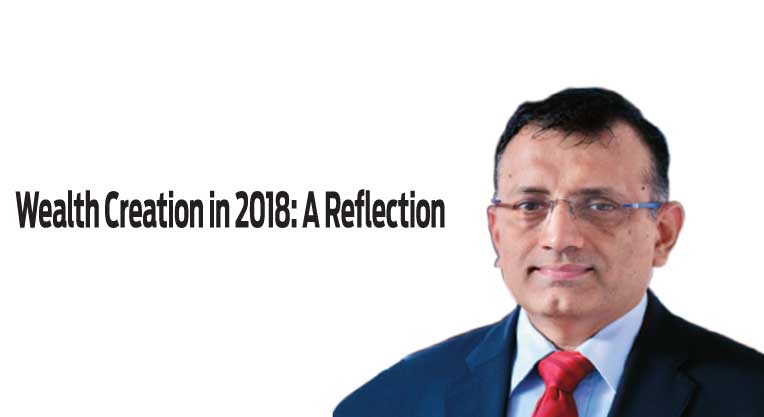 The paradigm shift in the thought process and maturity of the Indian investors is clearly portrayed in the ninth edition of Karvy Private Wealth’s, ‘India Wealth Report’. Shying away from the physical assets and moving towards financial assets like direct equity, mutual funds and insurance is a visibly clear trend which is going to gather steam in future. Financial assets have shown higher double digit wealth growth and now constitute 60.22 per cent of the total individual wealth in India. The proportion of direct equity in individual financial assets increased to 20.72 per cent, thus becoming the most preferred asset class in Financial Year (FY) 2018. We estimate a compounded annual growth rate of 16.99 per cent over the next five years for financial assets, and higher single digit growth rate for the physical assets.

Investments in financial assets through mutual funds were the most favoured route for the high networth individuals (HNIs) and the retail investors. The Asset under Management (AUM) growth of the industry had been stupendous in Financial Year (FY) 2018; it added Rs4.25 lakh crore to it growing by ~25 per cent on a Year-on-Year (Y-O-Y)  basis to Rs23.05 lakh crore, while SIP accounts stood at 2.05 crore, an increase of 70 lakh accounts. Total individual wealth in mutual funds was at `11.67 lakh crore an increase of 34.50 per cent from last year. The benefits of international investment and portfolio diversification, on the backdrop of recent currency depreciation had seen an increased appetite for international investments among the Indian investors, which increased by 25.83 per cent in FY 2018. Alternative investment was the flavour for FY 2018 among the HNIs, as movement of money towards alternative asset classes grew by 33.46 per cent. Among the physical assets, real estate, generally perceived to be a shunned asset class was the surprise of the pack, as it outshined gold and grew at the rate 10.35 per cent this year. Regulatory changes like GST and RERA had inculcated the necessary transparency in the real estate sector and schemes like housing, for all have provided the required push to the sector.

In FY 2018, wealth held in small savings schemes was up nearly by 10.33 per cent with noticeable increase in interest for Senior Citizen Savings schemes and Post Office Recurring Deposits. Financial inclusion and the reach of the post offices in the hinterlands will lead to a growth in post office deposit schemes at a faster pace. Social welfare schemes attracted attention as we saw investment avenues like Sukanya Samriddhi Scheme attracting huge inflows and growing by 56.26 per cent when compared to previous year, though on a small base. With more young population joining the workforce the wallet share for PFs will tend to rise, which grew by 11.03 per cent Y-O-Y to `14.48 lakh crore.

Being home to the fourth largest population of millionaires in Asia pacific region, India was the fastest growing in the world with 20.4 per cent HNI population expansion and 21.6 per cent HNI wealth growth. India’s allocation of wealth in equity is mere 19.02 per cent when compared with 30.90 per cent globally. Though in FY 2018 we had seen an increased allocation by three per cent, we feel  there will be a steady increase in equity shares in total individual wealth, concurring to India’s growing inclination towards financial assets. This will lead to the Indian proportion of wealth in equity being aligned to the global proportion in a decade’s time.

We foresee that direct equity and mutual funds will be the main wealth creators for Indian investors in future. Sensex has the potential to treble from current levels by 2025. Expectations of higher earnings growth; PE re-rating and strong present and future consumption demand, make us Soverweight on equities. The individual wealth is expected to double to Rs762 lakh crore by FY23 on the back of demographic advantage and stronger economic growth. Investments in alternatives and international investments will continue to hold a fair share in the portfolios of the astute investors while equity being a clear favourite.

The author is the CEO of Karvy Private Wealth

Redefine Your Investments With Some Global Touch