Watch Out! Big Guys At Play 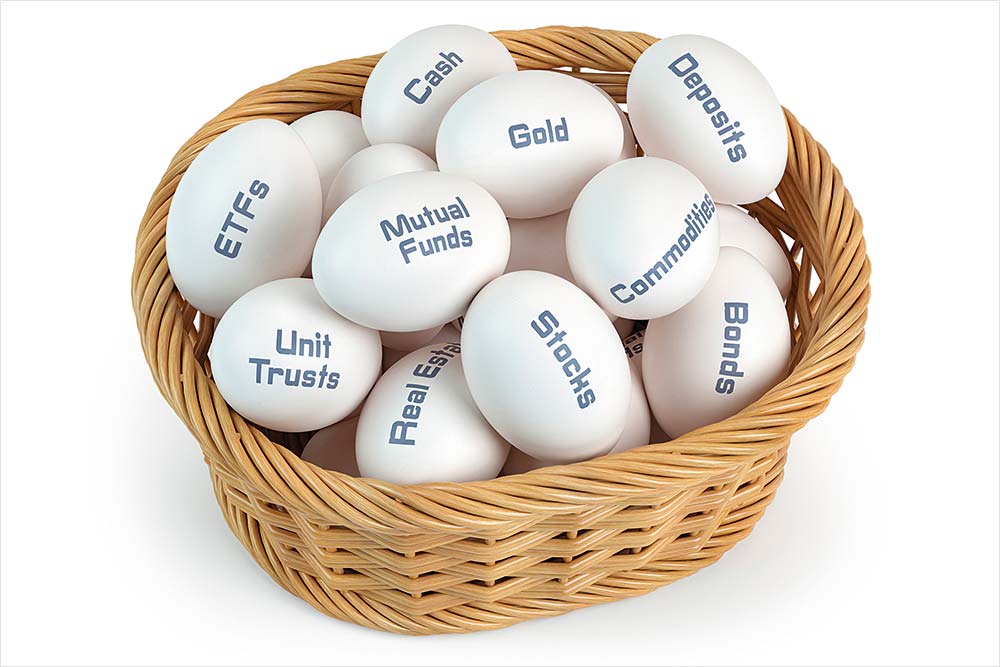 With the US Federal Reserve deciding to maintain status quo on its policy rates and continue its accommodative stance at its meeting held in the third week of June, institutional investors across the globe heaved a sigh of relief. The community was anticipating some changes in the Fed commentary, from dovish to hawkish, but that didn’t happen, at least entirely. Though the US central bank said it has advanced to 2023 the deadline to revise the prevailing low interest rates to 0-0.25 per cent.

According to market experts, there is enough time to reach the deadline and till then the party will continue for the big investors. The liquidity provided by these investors will continue to drive the equities for some more time. However, their approach will be more cautious going ahead.

As long as the low interest regime continues in the global economy and the deluge of liquidity continues as a result of fiscal stimulus by developed economies, flow into the emerging market (EMs) equities may sustain, they say.

Foreign Portfolio Investors (FPIs), who were anticipating adverse move from the US Fed, turned net sellers in Indian markets since April 2021. This trend, however, reverted in June on the back of robust performance by Indian corporates and rapid economic revival.

“After being net sellers of Indian equities to the tune of Rs 12,800 crore in April 2021, FPIs were actually buyers in May for Rs 5,350 crore. Smart FPIs have bought into broader market themes in India outside the index which, coupled with buying from savvy Domestic Institutional Investors (DIIs), have reduced the valuation differential between large-caps and mid-caps,” says S Ranganathan, Head of Research at LKP Securities.

The foreign investors were perhaps unnerved by the impact of the second Covid wave and the consequent restrictions on economic activities and corporate earnings. According to NSDL, the FPIs sold equities worth Rs 9,659 crore in April and Rs 2,954 crore in May.

They had moved their money to other emerging markets but the sheer momentum in Indian markets prompted the investors to revise their investment blueprint in June. In the first 18 days of the month, FPIs picked up equities worth Rs 15,312 crore.

“The FPI strategy of selling in India and moving to other emerging markets like Taiwan and South Korea from early April to mid-May has been proved to be sub-optimal since India has been outperforming most other emerging markets. That’s why FIIs staged a comeback since mid-May and began buying aggressively. Progressive unlocking of the economy is likely to improve the prospects of growth and corporate earnings in FY 22,” says VK Vijayakumar, Chief Investment Strategist at Geojit Financial Services.

According to Ranganathan, when they resumed buying in June, they were selective across categories like technology, private insurance, agrochemicals and fintech. Huge delivery-based buying in frontline stocks like RIL, ICICI Bank and ITC indicate high appetite for these stocks and FIIs might be buying into them and other high-quality stocks with earnings visibility. “This trend may continue going ahead,” Vijaykumar says.

Many experts believe that the present market dynamics of scaling new highs every day is irrational when viewed from the perspective of the health crisis and the pain the economy is going through. More pragmatic experts say that it is important to appreciate the fact that India is part of the global bull market and the resilience of the domestic markets arises mainly from ‘hope trade’ being fuelled by the expectation that the second wave is almost under control and the economy will quickly rebound. Moreover, the fourth-quarter results have broadly outgrown expectations. 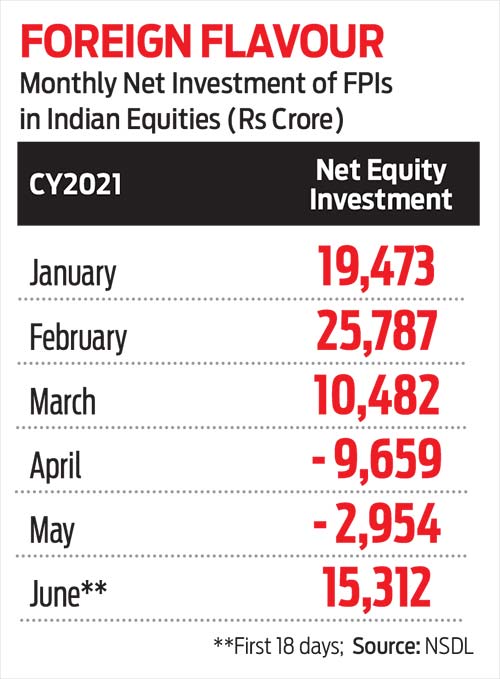 According to the India Strategy Report from Motilal Oswal Financial Services, FPIs posted inflows of $7.3 billion, whereas DIIs recorded outflows of $3.2 billion in the March quarter.

The FII-DII ownership ratio in Nifty 500 remained unchanged at 1.6 times (x) in the fourth quarter, but was up from 1.4x in March 2020. In terms of absolute holdings, out of the total FII holdings of $593 billion, private banks top with $139 billion in investment value.

“Institutional inflows from both domestic and foreign investors will continue towards equities as long as India Inc’s earnings match with the market expectations, as we have seen in recent two quarters,” says Gautam Duggad, who heads Institutional Equity Research at Motilal Oswal Financial Services.

Another factor that will drive this flow is the pace of vaccination. The prime minister has chalked out an ambitious plan of vaccinating major part of the 133-crore population by December 2021, he adds. The third important factor that will guide the market and inflows will be the course of opening the economy.

An analysis of historical data of institutional investors shows that FPIs have been more loyal to India than their Indian counterparts. FPIs have been investing in India since 1994-95 when the economy opened up. They have been investing consistently, barring 3-4 years when there was a global financial crisis (GFC) in 2008. India, as an asset class/market/economy, has consistently received inflows and it will not be right to tag them as short-term investors. Their money has been most stable and has stayed back in India through the thick and thin, so the colour of money should not matter as long as we are getting a consistent cash flow.

Despite the bull run in the markets because of the big players, the retail investors must not lose their cautious stand, warn experts. “Big players may move in and out of the market, but investors have to be cautious since uncertainty is high and the second wave may impact the economy and earnings worse than expected. It makes sense to partially book profits and move some money to the safety of fixed income,” suggests Vijaykumar.

‘Index Is Just A Data Point’

A Rising Force On Icarus Dreams