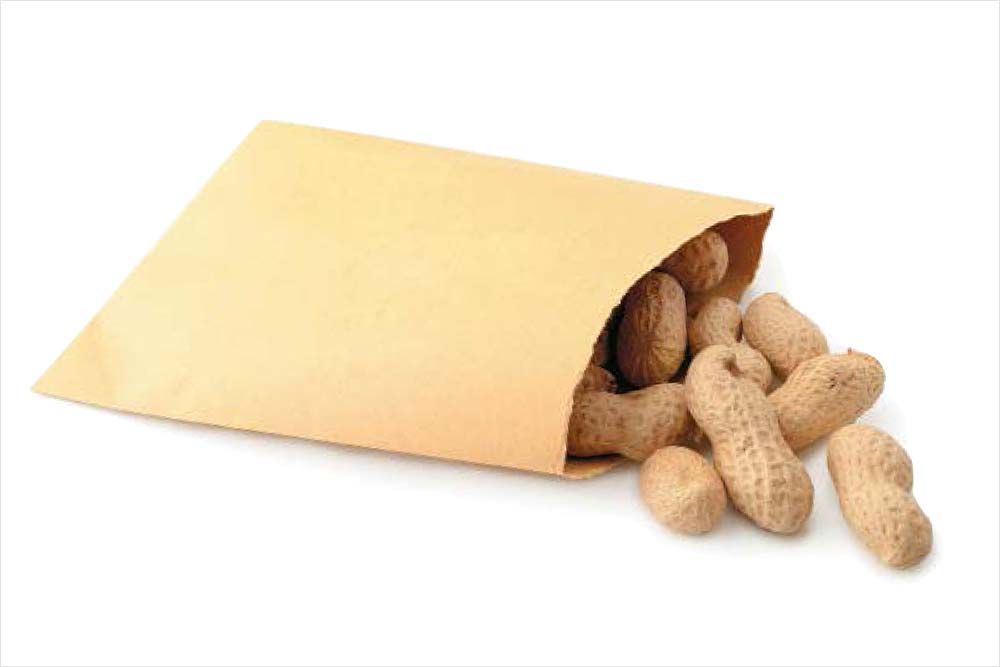 When all things normal don a new look, why won’t the good-old systems of basic personal finance do the same?

With the unfolding of the new financial year, the very technical definition of ‘wages’ gets a new look and form in sync with the restructured labour laws. The new Wage Code Act comes into effect on April 1. Passed in Parliament in 2019, it aims to rationalise dozens of central labour laws and unify them into a single code.

The legislation will also directly impact the salary structure of private sector employees and their take-home pay. Before we go into how your salary may be affected, let’s find out what wages mean according to the new code.

The Code on Wages, 2019 says that wages would include all remuneration whether by way of salaries, allowances or otherwise, and basic pay, dearness allowance and retaining allowance. The code specifically excludes from the definition of wages components like bonus, housing allowance, pension and provident fund (PF) contributions by the employer, conveyance and travel allowance, overtime allowance, gratuity, retrenchment compensation and commissions.

Under the new code, it is mandatory that the wages make up at least 50 per cent of the employee’s cost to company (CTC). All other payments, apart from basic pay, dearness allowance and retaining allowance, cannot exceed half of the total renumeration that the employee receives. And if they do exceed 50 per cent of the CTC in aggregate, which is the case for a large section of private sector employees, the extra amount by which it exceeds the threshold would be added to the wages.

The maze of exclusions and inclusions have left the salaried employee confused and anxious, says Prashant Sawant, who had co-founded Catalyst Wealth. “Most of the organisations have their basic salaries lying somewhere around 35 per cent to 45 per cent of the total cost to the company. This will change now. The basic salary will now have to be a minimum of 50 per cent of the CTC.  Allowances such as HRA, leave travel and conveyance will have to be restricted to 50 per cent of the CTC,” he says. Since the basic pay forms the basis for provident fund as well as gratuity contributions, any increment to the same in order to adjust allowance payments exceeding 50 per cent of the CTC, as the new law mandates, would have a direct bearing on both these contributions.

Sawant says that with the labour reforms coming into play, employers will start modifying the employee compensations to accommodate the new definition of wages. “The likely changes are going to include better post-retirement benefits, and dropped take-home salaries. There is going to be an increase in the provident fund and gratuity contributions from the employer’s end.” If an employee has a monthly salary of Rs 25,000 with a basic pay of Rs 9,690, which roughly translates to around 38 per cent of the CTC, the PF contribution works out to Rs 1,162. Since the PF contribution by both the employee and the employer is accounted for in the CTC, the net take-home-salary would roughly be around Rs 22,677. After the new code is implemented, the PF contribution would have to be calculated based on the new definition of wages, which has to be at least Rs 12,500 in this case. So, the PF contributions by both the employee and the employer would increase to Rs 3,000 each, bringing down the take-home salary to Rs 22,000, a notional reduction of Rs 677 per month. If contribution to gratuity is also considered, the reduction in take-home-salary would be around Rs 820 per month. While the monthly take-home-pay would see a reduction for a large section of employees, it would also ensure larger social security benefits as they would now be computed on a larger amount defined as wages. 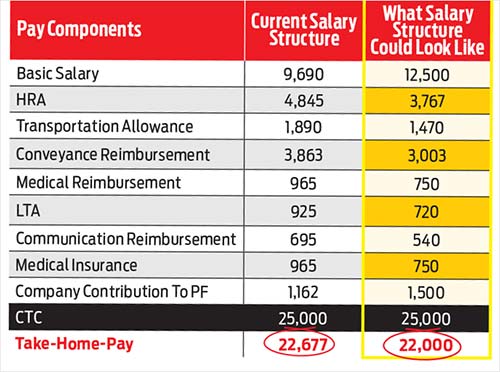 Experts like Akhil Chandna, Associate Partner at Grant Thornton Bharat, hail the new code for its universal applicability and uniform definition of wages for each and every kind of employees, workers and organisations. “It would provide benefits to a larger number of employees in the system,” Chandna says. The new wage code is expected to bring transparency in the entire labour law system, equality among employees doing the same work, and protection from unjust treatment to different categories of employees, especially on the ground of race, age or gender. It is structured to bring in harmony at workplace and ensure social security coverage for a wider section of the working population. Noorul Hassan, who is a Joint Partner at Lakshmikumaran & Sridharan Attorneys, sees that the employer has to strike a balance between compliance with the new definition, having optimal tax structure, and protection of take-home salary.  “There are more than 10 definitions of wages under the existing labour laws in India. Once the new labour codes are made effective, it will determine various social security benefits that an employee or worker is entitled to, hence giving a much-needed clarity to the employers,” Hassan says.

The idea behind the new wage code is to rationalise and simplify into one code the provisions of four earlier legislations related to the payment of wages, minimum wages, payment of bonus and equal remuneration across men and women, according to Vidya Mahambare, Professor of Economics at Great Lakes Institute of Management, Chennai. “Also, there are other requirements such as the overtime rate which should be at least twice the normal rate of wages. The new wage code is also likely to lead to a higher retirement corpus overtime for employees,” she says.

Some concerns remain unresolved, though, such as computation of state-wise wages and setting state-wise minimum wages. “It is also not clear if different state governments would prescribe different limits for bonus calculation and eligibility… If the current compensation structure is built for tax efficiency from the company perspective, it is likely to require a revisit under the new code. The larger PF contribution and the extension of coverage for the overtime pay may lead to additional costs to companies. The companies will have to cut costs elsewhere to manage additional costs related to labour,” Mahambare says.

Since the new code mandates organisations to recognise overtime pay, Milan Thakkar, CEO at Walplast, says one challenge would be to track overtime, especially in the current scenario as most of them are working from home.

The implementation of the four wage codes from April is bound to bring benefits to gig workers and gig platforms alike. Attrition rates, which are usually high in the gig economy, are expected to reduce due to the government’s recognition and formalisation of the erstwhile informal gig workers.

Gig workers were earlier disadvantaged as they did not receive benefits from employers as full-time employees did. While gig platforms will have to contribute to the social security fund, this will also reduce the cost of managing the workforce – which will also, in turn, improve attrition rates.

‘It’s The Guarantee That Matters’

How Online Banking Has Changed Investment