The Lustre Of The Old

Home »  Magazine »  The Lustre Of The Old 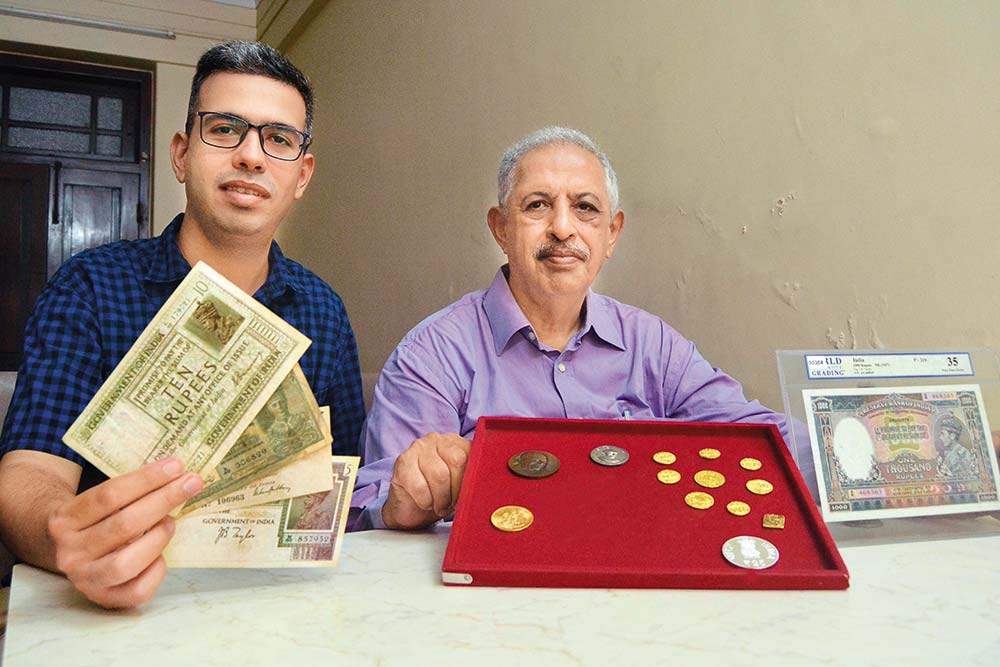 “This is a Greek coin, Drachma, keep it safe. Next, you have Poland’s Zloty, Mexico’s Peseta, and Peru’s Sol.”

That was Nemo – the Satyajit Ray’s adaptation of the name from Jules Verne’s Captain Nemo of 20,000 Leagues Under the Sea in his last film Agantuk (The Stranger) – while gifting his grand-nephew a few foreign coins he had collected during his pursuit of knowing tribal civilisations. “Even my friend’s father collects coins. I know what they are called. Numismatists,” says the excited little boy.

Coins, one of the more durable artefacts invented by humanity, come to us as symbols of lost memory, or of exotic worlds. For Nemo, the protagonist of the film and an anthropologist by the character, it was more an avocation — little tokens that he picked from his journey across the globe, gathering them along with forms of knowledge, experiences, and profound views of life. But for a lot of people, of all ages and income-groups, collecting coins from different eras and geographies has been a passion—markers of other worlds beyond what they inhabited.

Even if you leave aside the long prehistory of coins in the form of cowries and basic pieces of metal used as money, coins as we recognise them today have been around for almost 2,800 years, interwoven with the history of civilisation and trade. They not only offer us a gallery-like view of the workmanship of the artists and aesthetic tastes of those eras. As special objects that ensigned both kingly glory and invocations to divinity, they also tell us about the history of empire and religion. The coinage of the Kushan Empire, for instance, gives us a clear view of popular deities, the development of pantheons and their iconographic forms. The representation of the Buddha in human form is noticed for the first time on the coins of Kanishka, while in earlier representations he is shown symbolically. Because of its rarity, it is considered one of the most expensive coins in India.

No wonder people who collect coins find a special thrill in their enterprise. “For numismatists, it starts as a hobby and then gradually gets streamlined into a specialisation where they focus on coins from British India, Dutch India, French India, or the Princely States, the ancient or the republican coins,” says Anindya Jyoti Majumdar, a Kolkata-based numismatist. The practice of turning the hobby into a form of investment is still in its nascent stage in India. But with auctions and regular coin shows, the idea of numismatics as an attractive option to gain handsome returns is fast catching up. 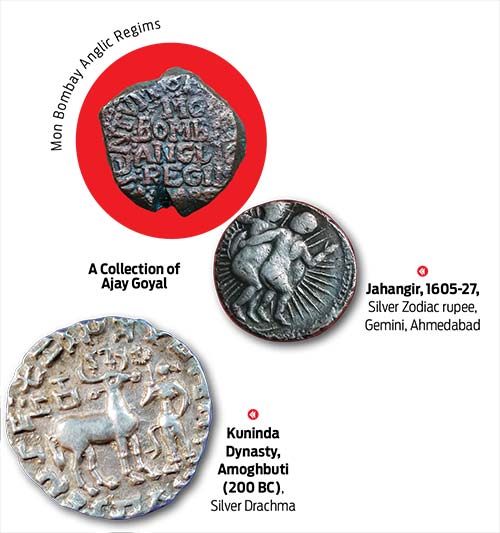 “Around 50 years ago, there were very few buyers of coins, medals and banknotes. Over the years, that has changed—especially since a regular coin show in Mumbai started by us in the early 1990s began drawing crowds and piquing the interest of people. These annual shows had a ripple effect, as other cities and smaller towns started organising shows and exhibitions to display items of numismatic interest,” says Farokh S. Todywalla, proprietor, Todywalla Auctions.

Dinyar Madon, a Mumbai-based numismatist, started collecting coins and stamps as a child but the passion had ebbed, as it often does. It was years later, when he took his son to a coin exhibition, that his interest as a coin collector got revived.

It’s difficult to be too choosy: good coins are those whose surface may have worn out from circulation, but major details are visible. “A good coin is essentially a bad coin,” says Majumdar. Coins with sharp features and lustre approaching the state of a new coin at the mint are graded as Uncirculated. And then comes Brilliant Uncirculated, which totally retains the original mint lustre. For example, if a 2,000-year-old Indo-Greek coin sits in the auction display with its mint lustre, it will fetch a phenomenal value.

The economics of the numismatic marketplace is like any other. It’s all about demand and supply—with a unique mismatch. “No new coins of historical eras are being struck and on the other hand, the demand is constantly rising. With increasing awareness, surplus money in pockets, and regular auctions, the demand for coins is seeing an exponential rise,” says Todywalla.

Today, numismatics is seen as a strong, safe and sustainable alternative investment. From 2008 to 2012, several numismatic investments doubled in value. This brought in many new entrants, some who would start looking at it only as an alternative investment. But soon, the collector’s bug catches and people become very passionate. This converts an investor into a collector or an end-user. This trend meant choice numismatic material became even more scarce, thereby driving prices up, says Todywalla.

“For me, collecting coins is more like a hobby, but I would also want to know if what I buy will eventually increase in value or not. If my next generation does not possess sufficient knowledge about this market or is not curious about it, I will probably sell off my collections as my children might get tricked without proper information,” says Madon.

Countries like the US and UK have a regulated, organised market with banks and corporates dedicated to investing in collectibles, despite lesser years of heritage as compared to India. Coin imports, around the globe, are free from restrictions and customs duties. However, the picture is not the same here. “In India, we are not allowed to import even Indian-origin coins, medals or banknotes without being harassed by Customs and DGFT. Those who seek to import Indian-origin coins back to India have to spend hours running from pillar to post and end up paying exorbitant duty and fines,” says Todywalla. Combine this disabling atmosphere with a general lack of awareness, and also the very limited number of coin shops in India. That’s why the market is still tagged as an unorganised one.

That may be changing, though. Experts cite the very number of books available  in the market that can guide collectors—to identify coins correctly and evaluate their historic importance. Building a certain deep familiarity is part of the process—if a collector has to gain knowledge, it’s best that he or she relates to a certain type of coinage, be it as a connection with a region or a period in history that he/she enjoys reading about or cherished in childhood. This also brings a certain order and thought into collections—they no longer stay haphazard, random purchases. Any collection that is well thought out can fetch maximum returns. One has to strategise and consider certain benchmarks before making a purchase. 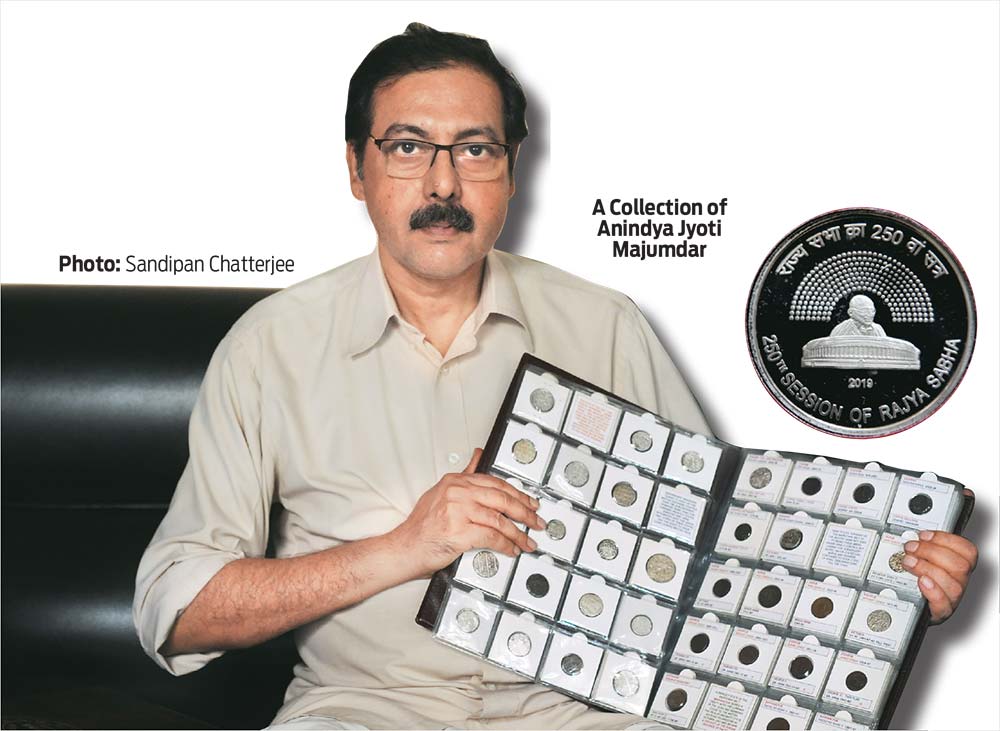 “There are several niche areas that are doing extremely well. Ancient India coins such as Gupta gold coins, Mughal coinage, those from the Princely States, and British India coins are ever so popular with collectors and investors alike,” says Todywalla.

This process of evolution can be seen at the institutional level also. “This market is no longer completely unorganised, with several auction companies and dealerships. Prices are dependent on condition and rarity. Online sale results are a good benchmark for people to ascertain the valuation of certain items. To monetise, you could either find a collector or an investor, or you could go to an auction company to sell your wares to list them in a transparent marketplace. Or one could use online portals,” says Todywalla.

But with the advent of online platforms, it becomes difficult for collectors to know who the seller is and what their antecedents are. It is important for the buyer to have confidence and trust in the seller. A guarantee is the first step towards building a foundation of trust, says Madon. “As far as unethical practices are concerned, auctions are fairer places, where you come across different dealers, and catalogue prices. The communication helps you understand where the market stands,” says Ajay Goyal, a senior collector and member of the executive committee of Mumbai Coin Society.

The online ecosystem segues into this in other ways too. The lack of interest in the mainstream media has not helped, so auctioneers mostly rely on social media. But, much to the delight of collectors, the number of auctions has increased. “Earlier, we used to wait for one auction every quarter, now we have 7-8 auctions every month,” says Goyal. A striking irony is that all this buzz is happening at a time when money itself is transforming from metal currency to digital ones, and experts feel that can only put more glitter on the market.