The Death Of Debt In Money Market

Home »  Magazine »  The Death Of Debt In Money Market 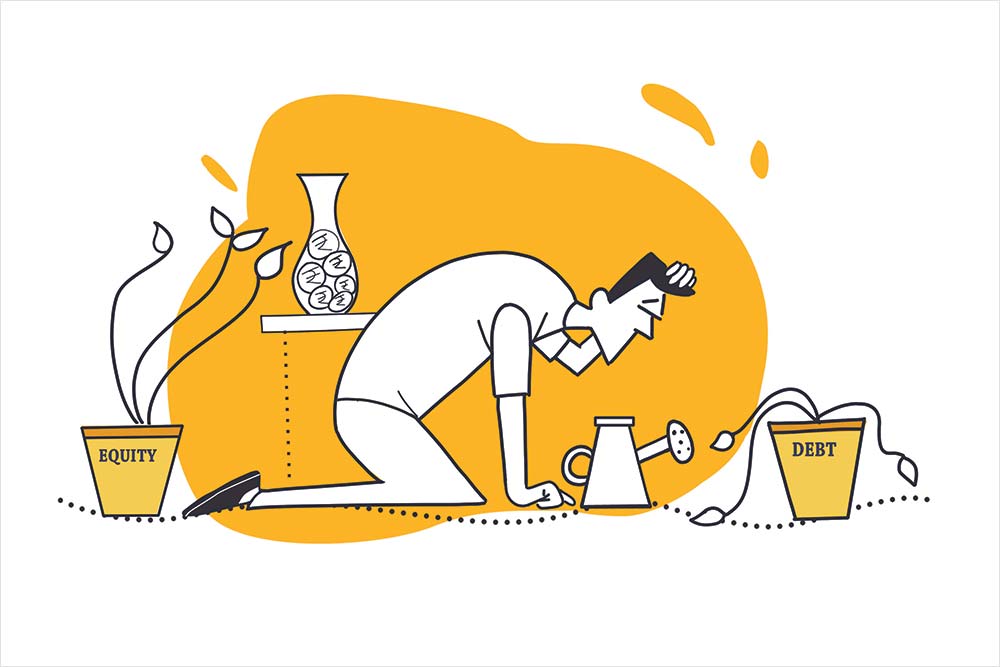 Most tragedies have a common trait – someone always dies at the end. A tragedy of sorts is being played out in the debt market even as you read this. The concept of generating sufficient yield from debt is quite nearly moribund these days. The state of affairs there stands in stark contrast to the robust performance being delivered by equity at this very moment. To most investors, debt now makes a compelling alliteration: ignoble, irrational and inconsequential.

The latest stance of the Reserve Bank of India, as expressed in its recent policy, is to maintain status quo on interest rates. The central bank’s accommodative view, generally in keeping with the market’s expectations, brings no specific succour insofar as debt investors are concerned. For them, the overall fixed-income environment appears gloomy as returns are likely to remain under considerable pressure in the days to come.

The most astute among them will rather stay put in short-term papers in order to make the most from the debt market. Going long is not really an option for most quarters, unless a longish call is perfectly in sync with their risk appetite. The latter will determine the kind of asset allocation strategy they will ultimately adopt.

As things stand, however, such allocation will be subjected to the two old reprobates – interest rate risk and credit risk. As for the former, changes in rates are not immediately imminent, as the banking authorities are likely to hold back on modifications for the time being. The latter, nevertheless, is quite a different story at this juncture.

Credit risk today is what may be called a very palpable peril. I will explain briefly. Well, a number of systemic inefficiencies have been noticed in the recent past. Several sectors have done poorly in the recent past. Certain companies have delayed payments – that is, they have not serviced their debt in an efficient manner. This has resulted in rating downgrades or worse, considering the fact that straight defaults have also occurred. Quite a few heavyweights have made it to the defaulters’ list. IL&FS will surely ring a bell. Lamentably, this has not been the finest hour for corporate India.

Speaking of credit defaults and downgrades, I must insist that opting for AA-rated papers and the like is not for all and sundry. Taking a competitive credit call has its dangers, and staying invested in bonds (or bond funds, especially the risk-taking kind) may not be the wisest thing to do under the present circumstances. So, for those who still believe in chasing yields, here is a short list of critical pointers.

Yes, the discerning reader will quickly think of equity at this juncture. Agreed, but I will discuss the first point in some detail. As you will no doubt agree, taking risk of the nature mentioned here is significant if you really wish to accelerate returns. Yet, in the current scheme of things, returns will not really increase by leaps and bounds. This, of course, will lead you to the essential question – is credit risk actually worth it?

The short and sharp answer is a thumping no! Credit risk will probably help you beat the nearest fixed deposit. But that is all – the buck stops right there. This, meanwhile, brings us to the subject of fixed deposits, FDs in short. You see, FDs offered by banks are very nearly meaningless in today’s world. They deliver so little, and the irrelevance of these deposits (particularly the humdrum, low-cost instruments that bankers love to wax and wane about) was never as stark as it is now.

Reality – All Stark And Sombre

Let me, just for the time being, wear a different hat. Assume I am an eager-beaver investor, a first-timer willing to test the debt market. What are the elements that I get to observe right away? How does the scene unfold before my eyes?

Well, I see despondence all around me. Runaway inflation is suffocating us these days – and the CPI (Consumer Price Index) captures its brutal nature quite well. A hard look at retail prices will reveal the actual story. Fuel and food, in particular, are on the high side. The scenario is being attributed to all sorts of reasons, the most common being breakdown in supply chains in a Covid-scarred economy.

Given the near-incessant price rise, the average individual in this country has to make tough choices every day. His medical bills are climbing, so are the prices of staples and vegetables. Many of his compatriots have lost their jobs or have otherwise suffered because of shrinking income. Additionally, his age-old belief that fixed-income instruments will bring him some relief has almost disappeared.

How does this pan out? The answer, once again, lies in the sheer reality of it all. A 6 per cent inflation rate, a burden to which income tax is added at the end of the day, is hardly covered by the interest rate being offered by most fixed-income securities. For an individual who belongs to the highest tax bracket, it makes no sense at all.

Check out the latest interest rates of commercial banks. State Bank of India, the nation’s largest and the banking sector’s bellwether, for instance, is offering a rate that is hardly consequential for its customers. I will not go into the actual rate structure here, but let me say this again at the cost of repetition: the days of relying on bank deposits for income (annual or otherwise) are well and truly gone.

However, there is indeed a modicum of relief at the other end of the spectrum. The government has recently increased the deposit insurance level to Rs 5 lakh, which is quite an improvement from where it stood earlier. Investors who are still not keen on other asset classes will take comfort from this development.

Well, speaking of other asset classes, the difference between returns provided by equity and debt is simply humongous – the gap has lately increased due to a wild rally in the stock market. The last few weeks (I write this in the second week of September) have been particularly buoyant on the stocks front. The fact that the leading indices have markedly accelerated – yes, the BSE Sensex has clocked the psychological 60,000 points – has reflected the popular euphoria stemming from advancing equities.

For the archetypical investor, I agree, this is not an apple-to-apple comparison. The two asset classes are poles apart. There is no point in, say, comparing a company’s stock with that of the debt it has issued. However, a common thread of perception does run through – and binds – the two.

An efficiently-managed corporate may do well on the stock market because of a hundred reasons; chances are that some of its equity investors may take cognisance of its debt offer too. There may well be sufficient demand, at least from a small section, for the latter. And such a company will probably rank high in terms of perception from stodgy income-seekers.

Just for the record, I am not even thinking of other asset classes, real estate and commodities included. You see, each of these is uniquely risky, and investors need to ponder hard before they allocate too much in them. For the sake of balance and diversification, however, moderate exposure can be recommended.

At the end of the day, the standard norm for the investment universe is advisedly biblical. In four simple words, it conveys a wealth of meaning – to each his own. And may all of us prosper. Amen.

The author is Director, Wishlist Capital

The Epic Of The Erratic Investor