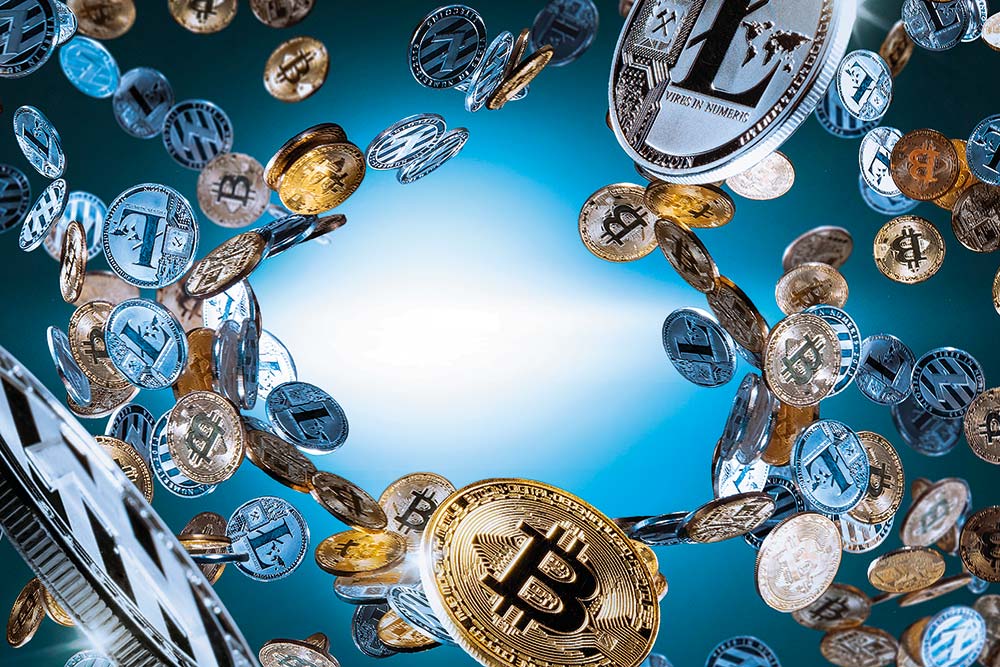 As many exciting events do, this one started with boredom – pandemic, accompanying lockdowns, and stay-at-home culture. A few school friends fooled around on their WhatsApp group. One of them boasted of making considerable profits in cryptocurrency trade. A few others decided to explore this new asset class. They made money too. Later, much to their consternation, they realised how this seemingly-simple world of virtual currencies was actually bizarre and cryptic.

They already know that the trade was legal in India. One can exchange a cryptocurrency for more of the same, or with similar ones – as with regular currencies like a rupee for a rupee, or a rupee for a dollar – and also across assets, like rupee for gold or stocks. This implies that a bitcoin, which is a crypto asset, can buy rupees, dollars, and gold. For the uninitiated, a cryptocurrency is a digital means of value-exchange that has no form. It is not monitored by a central bank or any global regulator.

Despite its freedom and flexibility, this digital realm without rules, creates problems. In the absence of any legal recourse, investors are often at risk. Except while investing through special exchanges that allow crypto trades. More importantly, Indian authorities have not finalised how to tax these profits. So, while banks convert cryptos into regular currencies, traders are unsure of how to pay taxes on their returns.

For most of us, the mysterious world of crypto assets opened up in March 2020, thanks to a Supreme Court judgment. Until then, the government viewed them with suspicion. People who invested could be arrested. In April 2018, Reserve Bank of India (RBI) had barred banks from making payments in rupee for crypto assets. Digital currencies, like their virtual existence, were floating in uncertain spaces between legality and illegality. One could only deal with them at their own risk.

The apex court finally ruled that banks and financial institutions had to allow transactions in these digital assets. It meant that this hidden trade, which was restricted to sale-and-purchase of cryptocurrencies, widened. Now, banks had to convert these digital currencies into regular paper money. For example, it allowed an individual to cash out and show returns. Thus, cryptos attained the same level of legitimacy as gold, stocks, and real estate. 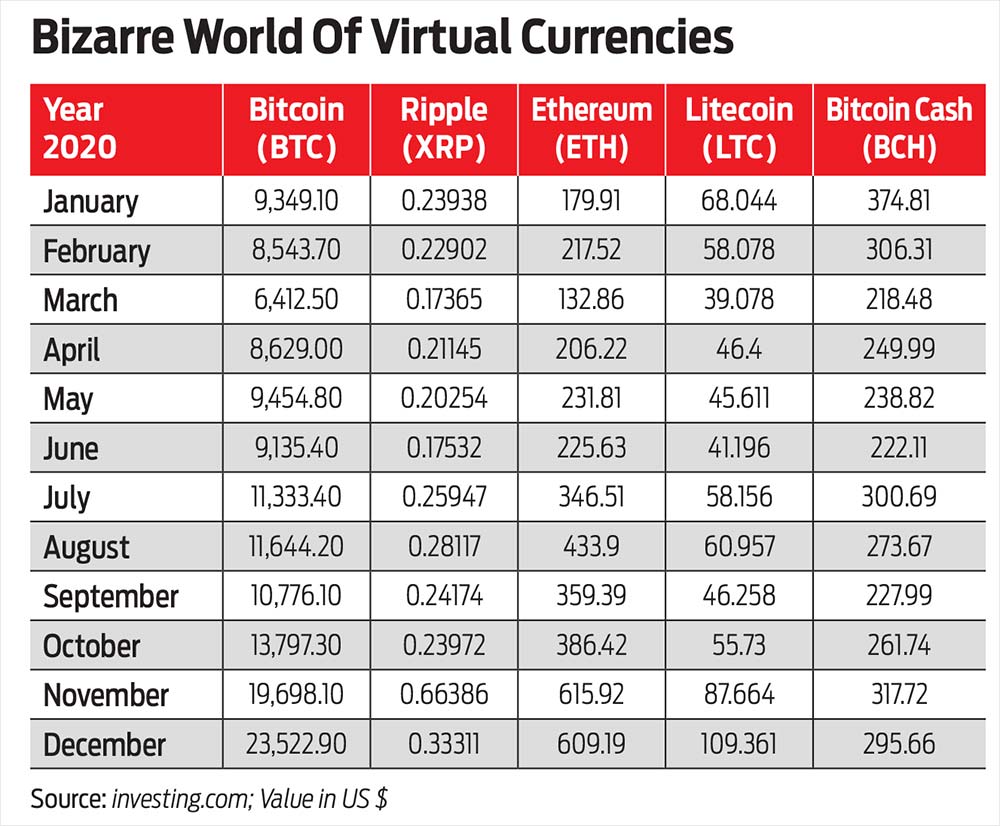 Business boomed on the Indian crypto-exchanges. Rahul Pagidipati, CEO, ZebPay, says, “Our trading community grew four times, and we saw an average 24 per cent monthly increase in trading volumes.” CoinDCXm Co-Founder and CEO, Sumit Gupta, contends, “We witnessed a 47 per cent hike in volumes and nearly four-fold quarter-on-quarter growth in active users.” Nischal Shetty, CEO, WazirX, adds, “There was 916 per cent increase in monthly trading volumes and 280 per cent growth in user signups.”

Most investors were young, between 19 and 40 years, and educated (50 per cent graduates). They hailed from states like Maharashtra, Punjab Karnataka, Gujarat, Uttar Pradesh, Delhi and Tamil Nadu. Growth in numbers was not limited to big cities like Mumbai, Pune, Chennai, Bengaluru and Delhi, but was visible in Tier-II cities like Jaipur, Patna, Lucknow, Bhubaneswar and Bhopal. Most of them belonged to the middle class, with annual incomes below Rs 1,000,000.

A recent survey highlighted other interesting trends. These traders belong to sectors that are known to hire financially savvy professionals. These include IT, financial services, and education. Of these, over a third of the respondents say they have worked in start-ups. Almost four-fifths of the people surveyed admit to investing in “other financial instruments”, including Systematic Investment Plans (SIPs). As expected, the bulk of those enthused by cryptocurrencies are below 35 years.

Investors were encouraged by the surge in prices of these digital assets. BSE Sensex marched 80 per cent from March 2020 till end of December 2020. In comparison, Bitcoin was up 267 per cent, Ethereum by a higher 359 per cent, and Litecoin by an impressive 180 per cent. Clearly, crypto-assets are more risky and volatile – Ripple crashed by 50 per cent between November and December 2020. Ethreum sizzled in November and lost its steam in December.

A trader, from the WhatsApp group mentioned earlier, revealed that his initial investment of Rs 5,00,000 returned a profit of 15 per cent within a few months. He was ecstatic. But he got the shock of his life when he checked with his Chartered Accountant (CA) on how to treat this income for filing tax returns. Is he expected to pay Goods and Services Tax (GST), which he, fortunately did during trading on the crypto-exchanges? Will his profits be taxed as income or capital gains, and whether as short-term or long-term?

The CA seemed clueless. He insisted that the returns attracted both GST and capital gains. However, he wasn’t sure about the latter. Some experts feel the returns need to be treated as income. What panicked our anonymous trader was that his CA refused to file his tax returns. “He told me that crypto-trade was a grey area, and I would have problems with the tax authorities, as PANs linked to such deals are minutely monitored. I was baffled,” he says.

The income tax department hasn’t clarified about crypto-incomes. Last year, the government constituted an inter-ministerial committee to study various aspects of cryptocurrencies. The committee is yet to formulate a regulatory and tax framework. “It is difficult to state a specific timeline for its recommendations,” admits a senior official. This leaves crypto taxpayers at sea, without knowing what to do.

If it can be dubbed as one, their only saving grace is a verbal comment from the tax department. Poornima Advani, Partner, The Law Point, explains, “Although the chairman of CBDT said that anyone making profits from bitcoin would have to pay taxes on them, other officials have suggested that cryptocurrency profits should be taxed as capital gains.” Rashmi Deshpande, Partner, Khaitan and Company, adds, “There is no law in India that recognises crypto assets.”

Deshpande’s contention implies that one does not know if these digital currencies will be considered goods or services under GST, and the tax slabs they will be bracketed in. There’s no clarity if the profits constitute income, which attracts individual income tax or should they be treated like stocks, which are liable to capital gains. At present, crypto-exchanges discharge GST on the commission they receive. “Unless there is clarity, there will be a risk,” says Deshpande.

In fact, risks loom large because the ‘default’ mindset of the income tax authorities is to associate cryptocurrencies with money laundering instruments. This is not unique in India; it is a global phenomenon. Tax evaders, dishonest gamblers, embezzlers, smugglers, and drug lords are known to wash their illicit money, from black to white, through digital assets. A tax official warns, “People should wait before going bullish on crypto. Try not to invest huge amounts.”

What he has left unsaid is that given this notion of crypto assets, the I-T department would necessarily scrutinise returns of such investors. It would be a case of “guilty unless proven innocent” as tax officials would be confident of crypto-trade being used to whitewash black money.

This creates hurdles for honest taxpayers. Sometimes, the devil is not in the details, but in the bold and frank disclosures. This brings us to another danger related to crypto-trade. It is a safe haven for the dishonest because cryptocurrencies are not regulated or monitored by national, global, or autonomous agencies. The crypto-exchanges, which work like stock exchanges, do not have regulators like Securities and Exchange Board of India (Sebi) or the US Securities and Exchange Commission (SEC). Crypto trading platforms have developed internal protocols, although their mechanism to check clients is through Know Your Customer (KYC) norms, and an independent public wallet assigned to each customer.

This means, traders have minimal safeguards and are at the mercy of the exchanges. There is no legal recourse. Definitely not in India. Hence, if you lose money for some reason prices of highly volatile cryptocurrencies are manipulated, you can do nothing about it. Anyone with moneybags can rig prices. In the past, global bitcoin prices have hovered between crazy highs and lows. They can fling you upwards, or hang you.

The Boom in Digital Finance Comes with Its Challenges