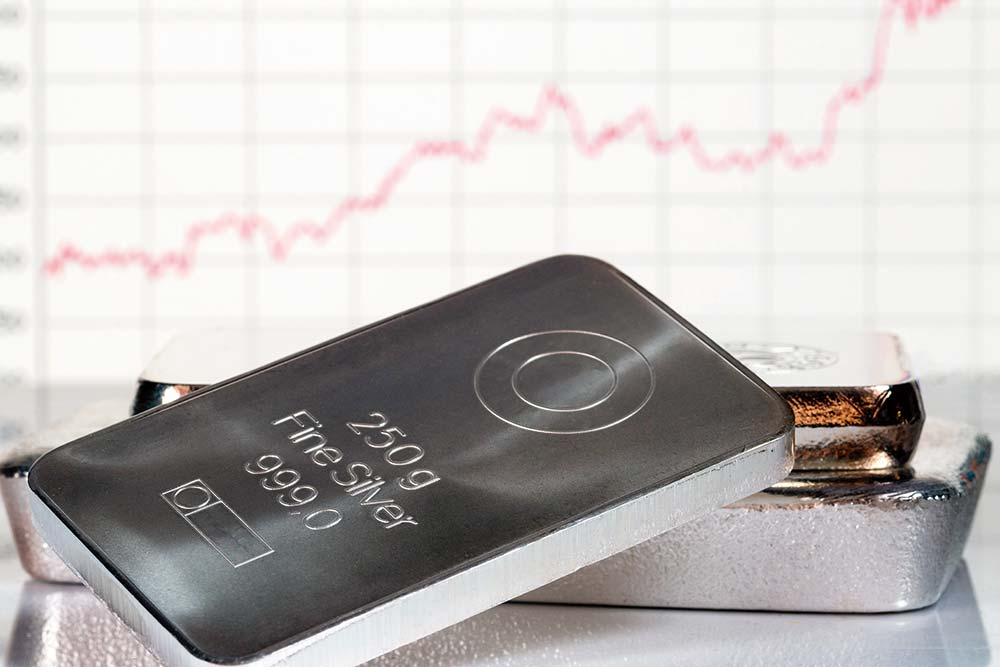 So rightly it’s said that all that glitters is not gold. In fact, silver glitters more than gold as India moves on, leaving the COVID scare behind. While gold prices entered a correction zone after a blinding spike during the months of the pandemic, silver stole the show as the world entered 2021. The white metal sold for Rs 68,535 per kilogram in the spot market at the time of going to press – a surge of 62 per cent over the same period last year when it was trading at Rs 42,425 per kilogram, while the March contract (futures price) climbed 44 per cent from the year-ago period to Rs 68,690 a kilo.

Silver’s performance in the international market in 2020 has been one of the best in recent years as it added more than 60 per cent to its value by mid-August. It surged to a seven-year high, scaling to $30 per ounce (an ounce is 31.10 grams).

Gold rallied 28 per cent in rupee terms in 2020, when the pandemic-induced containment measures stalled all economic activities across large parts of the world, scaling record highs. Gold futures surged 43 per cent to an all-time high of Rs 56,191 per 10 gram at the MCX as investors looked for a safe haven for their money in August.

After the bull run last year, gold prices began stabilising but silver, which had traded 47 per cent higher last year, kept charging. “The yellow metal may consolidate for some time but silver, due to its industrial usage, is expected to stay elevated in 2021 also,” says Naveen Mathur, Director – Commodities and Currencies at Anand Rathi Share and Stock Brokers.

The two metals are different in market terms. While gold is purely a precious metal, silver is considered a hybrid as it is also used as a base metal in various industrial applications. “The rapid price movement in silver created a value of opportunity for traders and investors and there is still a significant road to cover,” says Mathur. 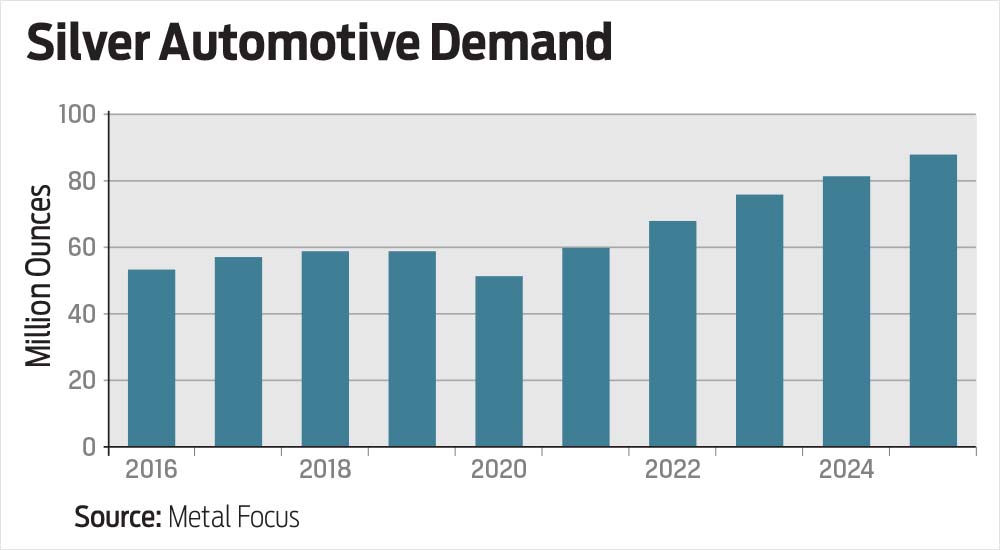 According to the International Silver Institute’s latest report, the global demand for the metal is likely to rise 11 per cent in 2021. Silver plays a vital role in the production of solar cells for electricity. Bulk of the demand for silver is expected to come from the solar industry for sustainable, reusable energy efficient purpose. India’s push for economic growth and green energy is set to see a huge flow of funds into clean-energy technologies.

That idea got a lift when US President Joe Biden outlined plans for a “carbon pollution-free power sector by 2035”. The move would require rapid acceleration in the deployment of renewable wind and solar power as well as electricity storage. This push into solar photovoltaics is crucial for future silver demand, and will continue to improve, as governments keep up their commitment on renewable energy sources.

A lot of infrastructure development is expected in the near term – not only in the US, but also in China and other emerging markets (EMs) like India – which would boost the use of base metals. “Silver will play a critical role in 5G technologies as well. The 5G deployment is still in its early stages and with its rollout in the coming years, silver’s role in electronic applications is likely to rise significantly,” says Navneet Damani, who leads research in commodities and currencies at Motilal Oswal Financial Services. 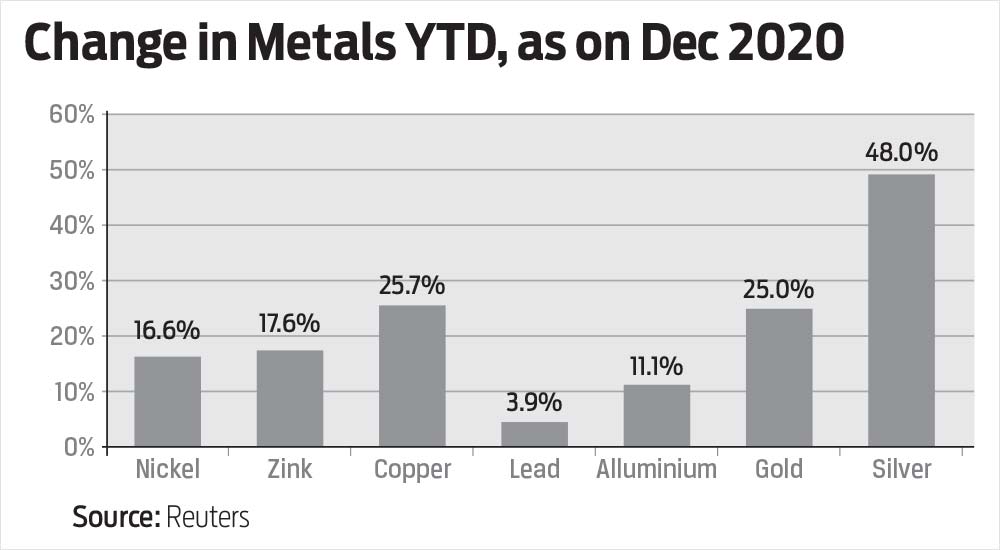 “In 2020, we saw an inflow of around 6,100 tonnes in the iShares Holdings,” he says. “It is debatable as to whether silver is being accumulated in this manner as a poor man’s safe haven purchase or as a speculative trade on the assertion that silver will outperform gold in the future.”

Either way, it does suggest that there is a strong support for physical silver and if this trend continues, then one could expect to see higher prices for silver and possibly fresh record levels in the near future.

Heightened exchange-traded fund (ETF) buying in 2020 also added to the metal’s move towards highs of ~$30. Silver ETFs have recently attracted retail investors and is expected to last in the foreseeable future. Inflow in the ETF suggests that investment demand has picked up in the recent past, boosting the overall sentiment.

Market trends suggest that the white metal will be more volatile than gold in the near term. “Though the silver prices will continue to witness upward movement in 2021, volatility will be an intrinsic part of this journey. Investors are advised to take a measured view of the price movement and take the exposure based on their risk appetite,” alerts Damani.

With the government slashing import duty on bullion from 12.5 per cent to 7.5 per cent in the Union Budget, the demand for silver is likely to surge among retail jewellers. “We recommend buying on dips. For silver, Rs 67,000-64,800 per kg is support for the short term and an upside is seen till Rs 73,000-75,500,” Mathur says.

A theory that silver is targeting a new life-time high of Rs 74,000 a kilogram cannot be ruled out. It will be followed by Rs 82,000 and Rs 88,000 over the next 12 months on the domestic front, according to Damani. On the lower side, Rs 60,000 remains strong support. Mumbai-based commodity trader Brij Mohan Bagri, however, feels that the bull run in silver has covered 60-70 per cent of the journey. “I don’t see much upside from here on as, the growth in its price, including gold, is directly linked to the weakness in the dollar index. As and when there is a fall in the dollar index, silver and gold prices will rise and vice-versa,” he says.

Silver’s future is also linked to US interest rates, which are expected to rise from the end of second quarter and the beginning of third quarter in calendar year 2021. At the best, Silver can move up to $30-31 from the current level of $26-27 per ounce in the interim till next two quarters.

Retail investors can invest in silver either through commodity futures exchange or buying physical silver from the retailer. The investor has the option to get the physical delivery. While buying physical silver from the retailer, one has to be extra cautious with respect to the purity of the metal. Experts advise to buy silver only from the recognised and trustworthy retailers as there is lot of adulterated silver stock always floating in the market.

Care For A Cover?

Glide To Your Retreat

Why ‘Access to Credit’ is a Challenge to India's Financial Inclusion