Shutdown Threat For ATMs In India 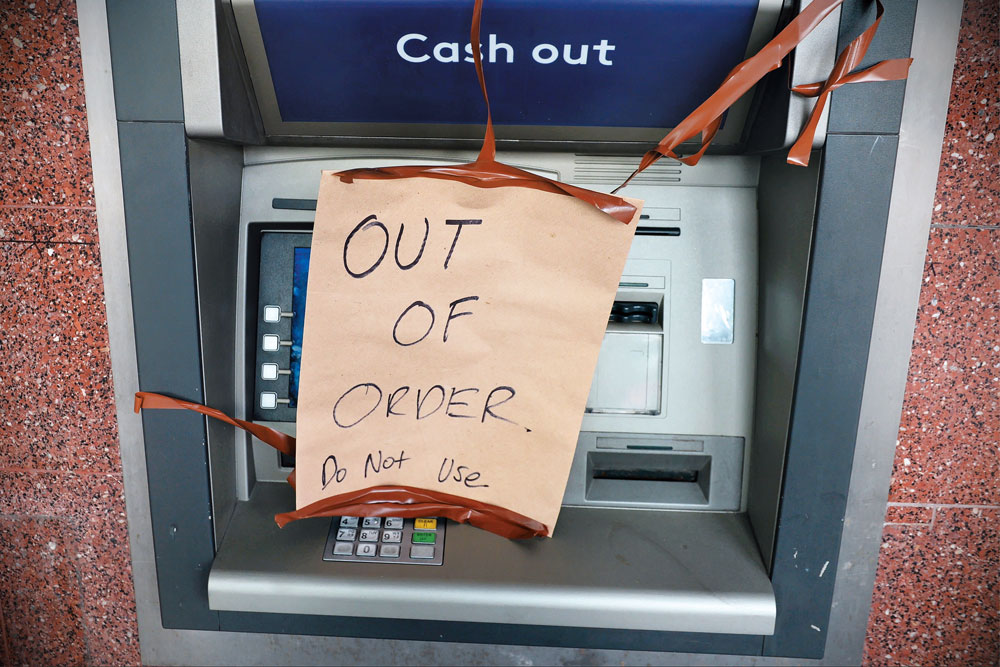 India, on an average has one ATM for every 5,555 citizens, lagging behind most developed countries like South Korea, China, Singapore, Canada, France, the UK and Japan.

Further Confederation of ATM Industry (CATMi), the Automated Teller Machines (ATM) industry body, feels that service providers may be forced to close down almost 1.19 lakh ATMs across the country by March 2019, which is half of the total 2.38 lakh machines. “These numbers include approximately one lakh off-site ATMs and a little over 15,000 white label ATMs (WLA),” a CATMi statement said.

The industry body exclaimed that the recent regulatory changes, including those on hardware and software upgrades, coupled with mandates on cash management standards and the cassette swap method of loading cash, will make ATM operations unviable, resulting in their possible closure. “Upgrading the ATMs for compliance is a long drawn out and logistically challenging process and one cannot expect full compliance across all the ATMs of the country, even by the end of this year,” said Radha Rama Dorai, MD, ATM and Allied Services, FIS.

This leads us to ponder upon many serious questions— Is India prepared to move fully digital in money matters? Does the country currently have a robust digital network to provide uninterrupted high bandwidth, high-speed broadband internet connectivity?

If the answers are in the negative, there is a crisis looming large over the way Indian consumers manage their banking and finance.

The closure of ATMs will also directly affect basic banking services that are provided by business correspondents through their micro ATMs, according to sources in the banking industry. RBI data shows that rural India, where the population is close to 77 crore, has only 41,000 ATMs. “Due to lack of financial literacy, a majority of the rural populace still remains out of the banking system. With Pradhan  Mantri Jan Dhan Yojana adding new basic savings bank deposit accounts and the direct bank transfer benefit system, it is essential to have ATMs in rural areas where the account holder can have easy to access cash and other services,” said Rustom Irani, CEO, Cash Business, Hitachi Payment Services.

To aid financial inclusion and drive ATM penetration in the country, RBI has permitted the launch of WLAs that allow private non-bank companies to set up, own and operate their own brand of ATMs in the country. Tata Communications Payment Solutions is the first company authorised by RBI to open WLAs in the country. The others to get the authorisation for setting up WLAs include Muthoot, Prizm Payment Services and Vakrangee.

The industry body has further warned that closure of the ATMs will impact thousands of jobs and also the financial inclusion efforts of the government.

Himanshu Pujara, MD, Euronet Services India, suggested that the Government should constitute a committee with RBI representatives, banks, cash-in-transit companies and ATM service-providers. Cash-in-transit companies are firms involved in ATM replenishment, cash pick-up and drops. “This four-way dialogue should result in reaching a middle ground that will benefit all concerned, including end-customers,” stated Pujara.

The committee should conduct a joint dialogue on understanding the implementation costs of these compliance mandates, debate the cost structure, revise the interchange rate, the fee paid by an issuing bank to an acquiring bank for accepting card-based transactions and finalise the payout mechanism on compliance. However, till that time, the ATM managed service providers need to be contracted by banks to provide specific services for their ATMs.

The new RBI norms are directed to the banks asking them to carry out certain security changes in the hardware and software infrastructure. These measures are to be carried out by all the banks and across all 2.38 lakh ATMs in India. Post the CATMi announcement, the probability of shutting down 1.19 lakh ATMs was by March 2019 to which the banks reacted by issuing statements refusing to follow. 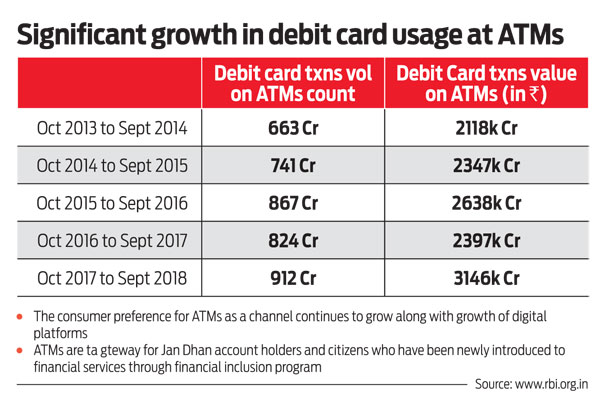 According to a Punjab National Bank statement, sent to Outlook Money, “The bank has successfully implemented the security measures at almost 50 per cent of its ATMs and will complete the process before March 31, 2019. It is ensuring that customers do not face any cost burden due to these reforms as the bank has no plans to increase various charges related to ATM usage.” However, there is no concrete communication from the bankers’ community. The ATM mobile service providers have made several representations to RBI, National Payment Corporation of India and Indian Banks Association for the same but there has been no  positive response.

“ATM numbers have not been growing over the past year. This is not a good situation, especially when the debit card issuance numbers are going up month-on-month and Direct Benefit Transfer dispensations are also growing,” commented Dorai.

Unless banks step in to bear the load of the additional cost to meet these compliances, the ATM deployers do not have the financial means to make these investments and there is likely to be a scenario where contracts are surrendered, leading to large scale closure  of ATMs.

In April this year, RBI said that cash-in-transit companies should have a net worth of `100 crore and a fleet of 300 vehicles. The central bank also asked them to use lockable cassettes for more safety.

Moreover, the Home Ministry notified new rules which stated that ATMs could be replenished until 9 pm in cities and that cash vans will not carry more than `5 crore in a single trip. It also added that vehicles transporting cash should have GSM-based auto-dialers, security alarms, motorised sirens, tubeless tyres and at least two security guards. However, the deadline for implying to Home Ministry guidelines was February 8, 2019 which has already elapsed. And till now, there is no  significant change in the cash-in-transit process.

The industry body said that recent regulatory changes, including those on hardware and software upgrades, coupled with mandates on cash management standards and the cassette swap method of loading cash, will make ATM operations unviable, resulting in the closure.

As per estimation, the new cash logistics and cassette swap method will alone result in cost of Rs3,000 crore for the industry. It added that the ATM industry, including managed service providers, brown-label ATM deployers and WLAO, is still reeling under the shock  of demonetisation. The rising cost of compliance is threatening the very viability of the ATM channel.  No doubt, in the interest of consumers, the new requirements for cash logistics requires a lot of investments.  It’s time the banks and service providers look at  radical ways and strategies to reduce costs and maximise value  for the customer.

The WLAOs have accumulated losses and the compliance costs can result in over 15,000 machines run by them shutting down, the industry body added.

A look at the latest RBI number revealed that cash is back in the economy, card transactions on ATMs are also increasing, but rural ATM infrastructure is not up to the mark. There are security threats, reputation risks, systemic risks, malware attacks, and hacking attacks. Besides, ATM operators also have to make their machines to service chip-embedded cards compliant as the deadline approaches for the industry to shift from the current magnetic striped cards. Early this year, a Parliamentary Standing Committee on Finance had asked the RBI to address the problem of perpetually dysfunctional ATMs and also asked banks to install adequate ATMs.

“We look forward to RBI taking the lead in addressing the remaining key issues such as evolving a cost-based interchange and rationalising the net worth criterion for WLAOs to ramp up the much needed  ATM density in semi-urban and rural areas,” said K. Srinivas, Director, CATMi.

However, with the election scheduled in April the process is likely to get delayed. But there is a glimmer of hope. A senior official in the Department of Financial Services told Outlook Money, that the matter is under review and since it is not a policy decision, the matter could be resolved earlier.

Are Your Pre-approved Loans Really Approved?