Platinum Scores Over The Yellow Metal 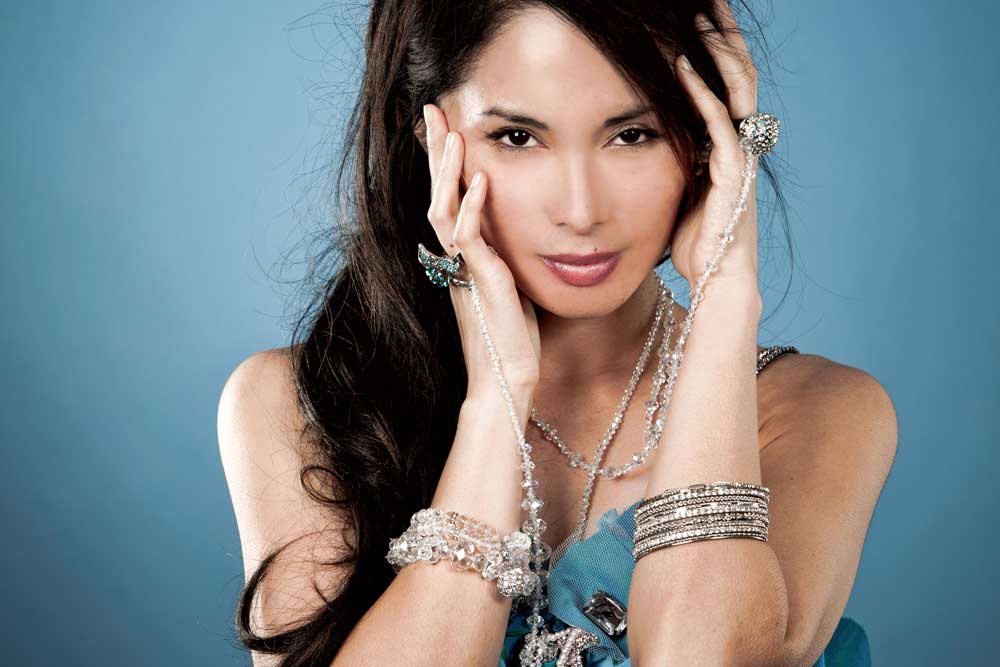 All that glitters in not gold anymore, its platinum! Sounds quirky, right? Well then fasten your seat belts because it is true that platinum prices are now less than gold, and youngsters, especially men, are now more inclined towards buying platinum jewellery than the traditional  yellow metal.

Platinum is a metal, which is 30 times rarer than gold. In a recent report published by Platinum Guild International (PGI)—Platinum Jewellery Business Review (PJBR) 2019 – the aspiration for platinum among today’s consumers was revealed. The report stated that the platinum market in India has witnessed consistent rise and reported a growth of 26 per cent in sales in 2018 alone.

The annual survey was conducted over 1,000 manufacturers and retailers, in addition to over 1,000 consumers to provide comprehensive and in-depth analysis of platinum jewellery’s performance in 2018, together with a forecast for 2019, highlighting the trends that will shape the industry in each of the four key platinum jewellery markets such as Japan, China, the US and India.

Commenting on the substantial increase in sales of the rare metal, Vaishali Banerjee, Managing Director India, PGI said, “The overall PGI programme retail sales growth was at 19 per cent. This year, PGI India will continue to work with strategic partners to expand its presence in Tier II and III cities to leverage the growing affluence and increased preference for platinum jewellery in these markets. The outlook on the category for 2019 is strong and we expect a growth of 15-20 per cent in overall PGI programme retail sales with the strategic retail partners posting a higher growth.”

The PGI is a marketing organisation, which was created in 1975 with the vision to develop the global platinum jewellery market as a new demand source for platinum. Since 2015 PGI has been headquartered in Hong Kong.  The organisation is funded by leading platinum producers of South Africa, as well as through co-funded programmes within the jewellery industry.

According to PGI’s Q1 2019 Platinum Jewellery Business Review, the platinum jewellery industry across key markets are becoming increasingly innovative and focusing on the bottom line. The fastest growing market continues to be India, thanks to its business model allowing platinum to deliver higher margin than other categories in the jewellery segment.

“India’s jewellery industry faced headwinds, struggling with both tight liquidity and new regulation on cash spending ahead of the election in Q2 (April-June). Conversion strategies and marketing campaigns aimed at young consumers drove platinum retail programme sales up by 15 per cent year-on-year in Q1, while PGI’s strategic partners saw their platinum jewellery business grow at a higher rate of 32 per cent year-on-year,” the report stated.

So why is this sudden spurt in demand for platinum? Is its raging popularity going to topple gold as a favourite investment metal?

Banerjee feels that, urban millennials are more exposed and aware of such things, thanks to digital proliferation within our country.  When it comes to premium products and services, they are increasingly looking at added dimensions of exclusivity, authenticity and meaning. “The platinum value system in fact stands for exactly that. World over, platinum is regarded as the “love metal – bought for moments of emotional significance”; it is a means of self-expression and a marker of status. Platinum in design, too, represents their sense of modern style and individuality, feeding into their desire to own something exclusive. A growing awareness and acceptance of these facets of platinum as a metal is driving acquisition today,” she  further concluded.

Commenting on the sudden surge in demand for platinum, Harsha Razdan, Partner and Head – Consumer Markets, KPMG in India, added, “Within the jewellery space, platinum comprises a small base and hence growth will continue to be high in percentage terms. Further, due to rarity as compared to gold, platinum is an exclusive metal and has a luxury positioning, which is why it is gaining popularity in India.”

Adding on to it, Suvankar Sen, Executive Director, Senco Gold and Diamonds said platinum was being promoted by the retailers and PGI for the past 15 years to build awareness. “Now, with the younger generation in pursuit of jewellery that compliments their personality and clothes, platinum is making strong inroads and its popularity is ever rising.” 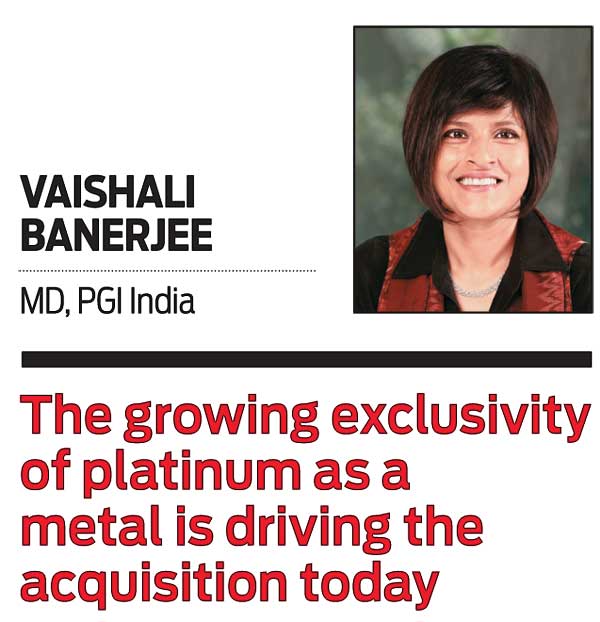 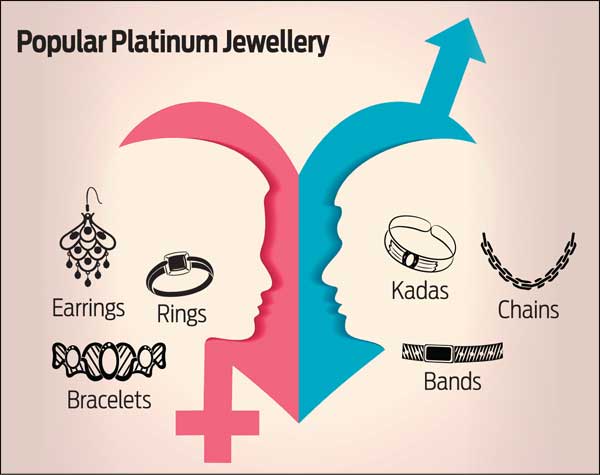 Certainly, the trendy, sleek look of platinum jewellery has made it a popular choice amongst youngsters.

Sen also pointed out at the reduced price range of the metal as a potential reason for popularity. Asked whether platinum can surpass gold as an investment tool, Sen said, “Not as an investment but more as an adornment and differentiator. However, compared to price of platinum and gold 10 years back, when platinum was almost double of gold, today it is cheaper than gold. So due to its rarity and price, it should be much more appealing and competitively priced compared to gold.”

Platinum price is India is around Rs24,470 per 10 grams. Unlike the yellow metal, in platinum there’s only one single form of purity.

When it comes to designs, diamond jewellery with platinum as a base, chains and bracelets are some of the most popular choices. The PGI report mentioned that apart from rings and bands, the demand for platinum men’s jewellery has been rapidly growing, making it one of the incremental lines of business today.

Platinum earrings and chains are quite lightweight and pocket friendly, thus making a great everyday accessory. Most engagement rings that were originally made in white-coloured-gold is now getting crafted in platinum because of its rare availability and classy finish, said Rupesh Jain, founder and CEO of Candere Jewellery. Also, people are now travelling more than ever. These travels influence the way of life as well as the way people dress up. Corporate look is more subtle in nature and platinum makes it just the right kind of accessory, he added.

Platinum has attracted the discerning class of millennial generation who consider it as luxury investment. It is often considered as a status symbol among the affluent class and is seen commonly paired with diamonds and other exquisite stones as a part of jewellery. “Rising disposable incomes, premiumisation, greater awareness along with a growing influence of the west has created a demand for platinum. Further, platinum has a gender-agnostic appeal and the metal carries low maintenance thus making it a popular choice among both genders. However, gold continues to be the preference amongst all metals given the ticket size of jewellery that consumers are looking at,” added Razdan. He further added that it is important to note that platinum has low resale value. 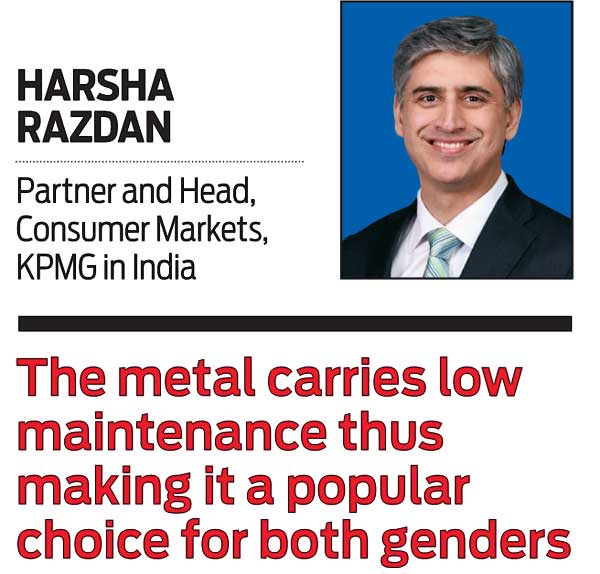 Commenting on the popularity of either metals, Seema Agarwal, Founder and Designer and Manoj Agarwal, MD, Nirakara Jewels said, “Platinum can never replace gold as an investment tool due to numerous reasons. Gold is the most important part and source of carrying monetary value of currency in a country. According to the country’s gold reserves they print their currency. Since, gold is the main base of investment for our country it can never be replaced by platinum.” 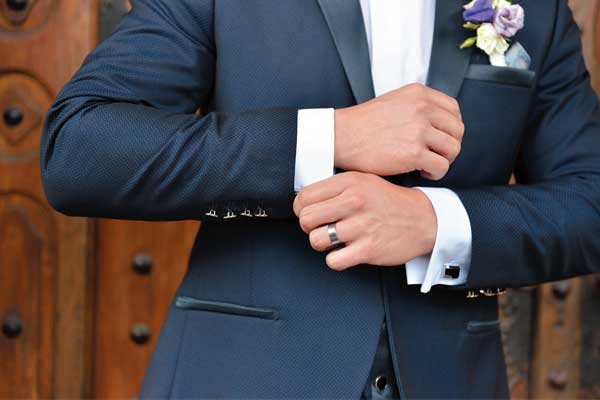 So, what is the future of platinum in India in the next two years? Razdan said, despite the fact that platinum prices have been falling in the last few years, it is seen as an attractive option in India because of its perceived luxurious value. The industrial demand for platinum is also expected to rise owing to its usage in gasoline engines and automotive industry in the near future. Within the retail jewellery space, there will be a need for unique differentiation in this fast growing niche category. Thus there will be increased efforts on marketing investments, which retailers will need to undertake to push platinum as a category. It is important for jewellery retailers to understand the cultural behaviours and purchase motivations in order to create differentiated and unique products and services, he further added.

Parth Gandhi, Co-Founder, Tiara said, even though platinum prices may appear bearish for now, it is expected to rise in the near future as platinum jewellery get more evolved.

Banerjee said platinum has increasingly become an integral part of the jewellery business in India.  The industry and PGI are bullish on the growth of platinum jewellery in the country. “We expect the growth to continue within the range of 15-20  per cent over the next two years.”

On a final note, it can be said that, platinum is here to attract more customers. It may not replace gold as an investment tool, but with reduced price the joy of possessing a platinum collection will lure many buyers to invest in it in the coming days.

Are Education Loans Worth The Effort?