No Price Tag For Happiness 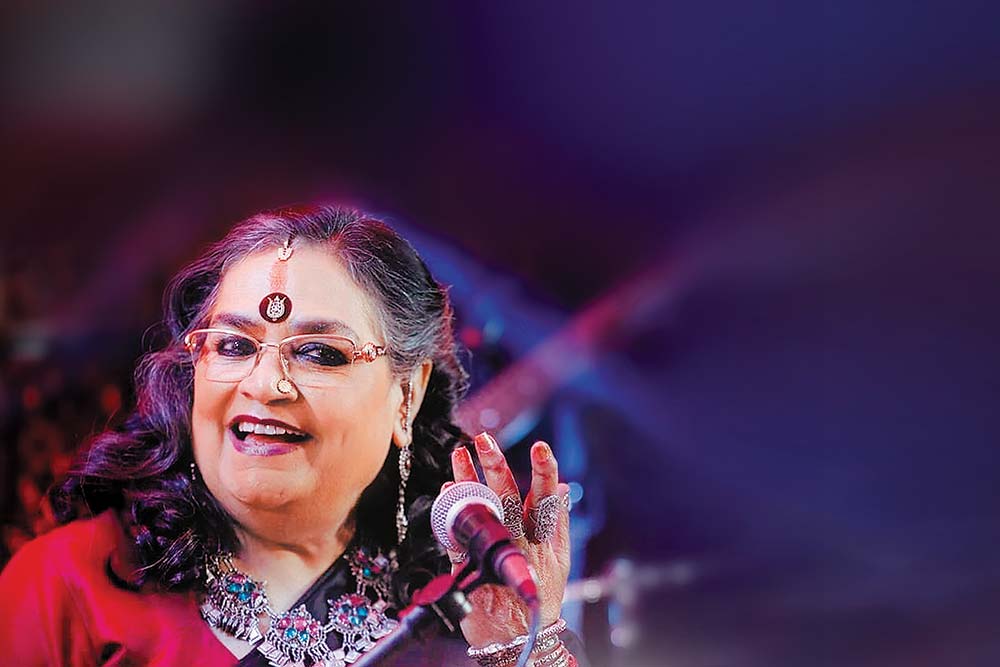 She embraces life with zest and drapes her Kaanjeverum like turbulence and tranquility in flow regal in her being.

Many might want to define life like living in a match box, but for Usha Uthup, it is more like unearthing the beauty, and not merely breathing. We cannot afford to just exist. It is dangerous.

We all remember how the young and restless Neil Perry from Dead Poet’s Society recites, “I went into the woods because I wanted to live deliberately. I wanted to live deep and suck out all the marrow of life. To put to rout all that was not life; and not, when I had come to die, discover that I had not lived.”

Usha Uthup’s approach towards fleeting life is somewhat similar to the lines of Henry David Thoreau. She changed music from the day she sang her first note, casting spell over thousands, making them sway to the rapid tempo of ‘Darling’, asking those thousand hearts to beat in the rhythms of life, to be alive, with her vibrato.

“I belong to the group that lives for the moment, and use the past only as a yardstick to locate where I have gone wrong,” says the singer, who had perhaps revolutionised female voice in Indian popular music. “Carpe diem,” she says, “You must seize the day – be it the music you croon or the future you build.”

No wonder, investing “at the moment” and not “looking for the long-term ones” is what defines the financial planner behind the singer. “I have known many people in the entertainment business who have been wise and correct with their money. But, in my opinion, I have been more correct by not letting money control me.”

Simple living and high thinking has been the principle for Usha Uthup. “It’s ingrained,” she says, “My father-in-law was a brigadier in the army and my father was a police officer. We never thought of making money out of money.”

But the pandemic rocked everything. She had her last public concert in March 2020 and since then it is confined to online shows alone. Her recording studio became the saving grace in these hard times. “God has been great with me as I didn’t have to cut salary of anyone working with me in the studio or in shows. I could do this because of my audio studio.”

Usha Uthup laments for not listening to her relationship manager at the bank and her husband when they advised her to invest in mutual funds, instead of simply saving in the locker of the bank. “Aisha, my granddaughter, has taught me a lot about savings and investing in trying times. Now I have learnt to different between a need and a want,” says the singer.

But it’s not money alone that keeps you going, she says in between crooning Money can’t buy me love, of The Beatles. She invests in the power of positivity and happiness. “I have stepped up my investments because in this trying time when everything looks dull and grey, one has to have so much positivity inside that nothing can snatch away the colours from her life.”

She suggests everyone from every industry and every walk of life to consolidate their earnings and not throw it away. “Respect and take care of your money but never put a price tag on your happiness and don’t forget to live life to the brim.”

She looks out of the window in her South Kolkata apartment unmindfully, humming The Winans.

Tomorrow, who promised you tomorrow
Better choose the Lord today
For tomorrow very well might be today.