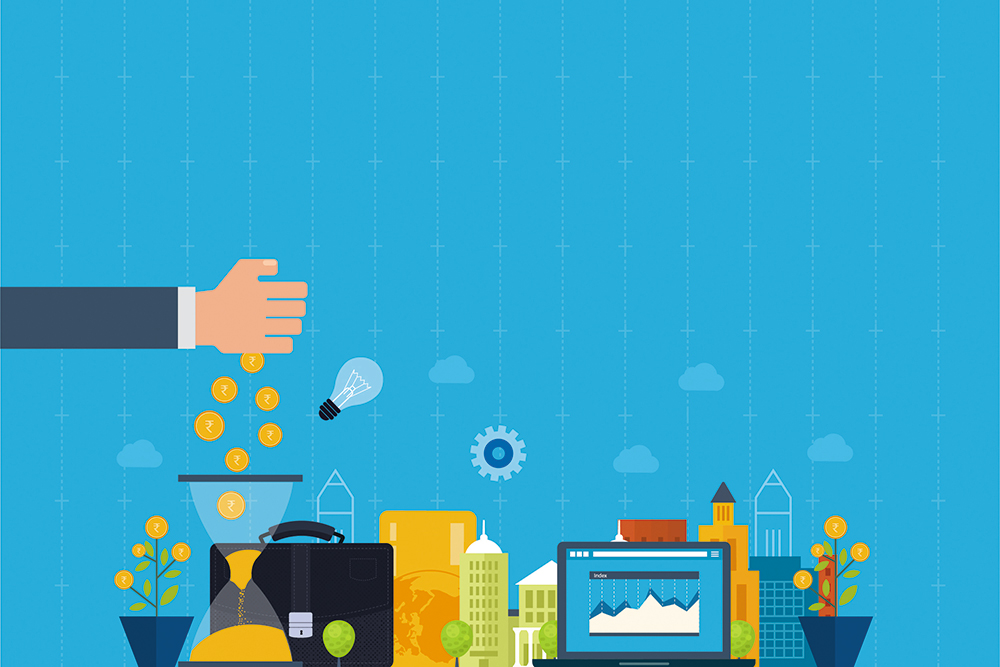 Hasn’t the latest rally all but debunked a hallowed myth – that oodles of money from stocks must be only made at a slow pace, one step at a time? Or that wealth isn’t generated if the investor is not truly patient? Well, that theory has been very nearly dissolved, albeit temporarily, because more money seems to have been made in the past five months than in the previous five years, at least for the luckier sections.

The point that needs enunciation is simple. Wealth-creation does not necessarily mean allocating a certain number of years; instead, an investor may well get in, get out, and between the two acts of ingress and egress, book profits all along.

In a post-COVID world, the wealth generator has been able to choose the right stocks from a fairly large and diversified basket of contenders. His transactions have been correctly executed too, at prices that have been compelling on both buy and sell sides.

Of course, the task has been made easier when seen in the light of the remarkable trend that big money has chased the biggest stocks. In other words, the large-caps, and the super large-caps, which are an intrinsic part of the mainline indices, have gained the most from the rally vis-à-vis mid-caps, which have not all advanced as significantly.

This is reflected in the two most popular indices, Sensex and Nifty, both have surged handsomely. The fact that the former is 50,000 and going strong has entered the realm of dinner table conversation. 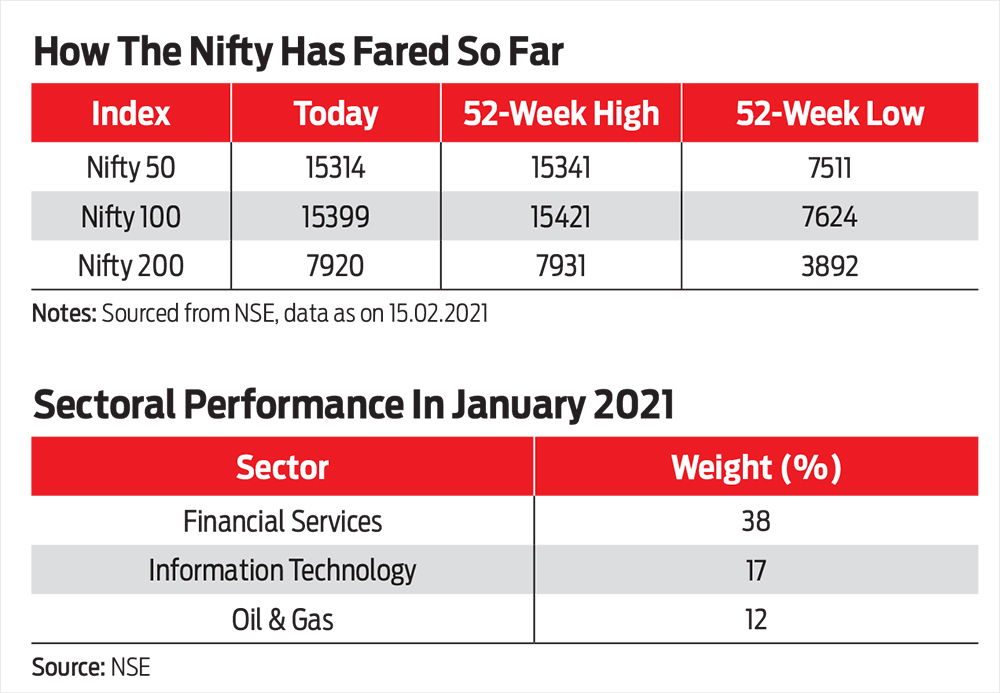 This conversation, it merits mention, is being peppered with certain poignant observations too - the advancing price of fossil fuel being one of them. Even as I write this, petrol has touched the Rs 100 mark in certain parts of the country. And that is not an insignificant trend, considering the impact it will have on inflation.

More wealth can be made in the short run, thanks to turbo-charged stocks that help burst all conservative predictions. Note the solid increase recorded by the leading benchmarks, especially Nifty 50. Mark the 100 per cent change or more in the 52-week highs and lows.

Money In The Short-Range

So the premise is quite logical —  a great deal of money has been made in the months following last year’s lockdown, at least right up to the middle of the last quarter of the current fiscal. In between the two phases, we have had plenty of economic stress, political adventurism, major farmer unrests, and a budget that underlined the government’s reformist policies on infrastructure. Throw in international headlines, the departure of Donald Trump and the arrival of Joe Biden in the White House is one such, and you will know that the market has witnessed formidable upheavals already.

The shorter-vs-longer gig can be further explained with the help of Nifty 50:

The figures quoted above pertain to the end of January 2021. “Total return” usually means the inclusion of dividends and other benefits, which are very relevant for consummate shareholders. Gains recorded by a patient investor who has held on to the index stocks (or exchange-traded funds) for five years are lower than someone who has done the same for just one year.

This, of course, tells a not-so-familiar story of luck and fortune. Only the luckiest and the most fortunate can hope to repeat this feat every time; I would even venture to say it is impossible. None but the very fortunate have been able to pick just the right stocks. 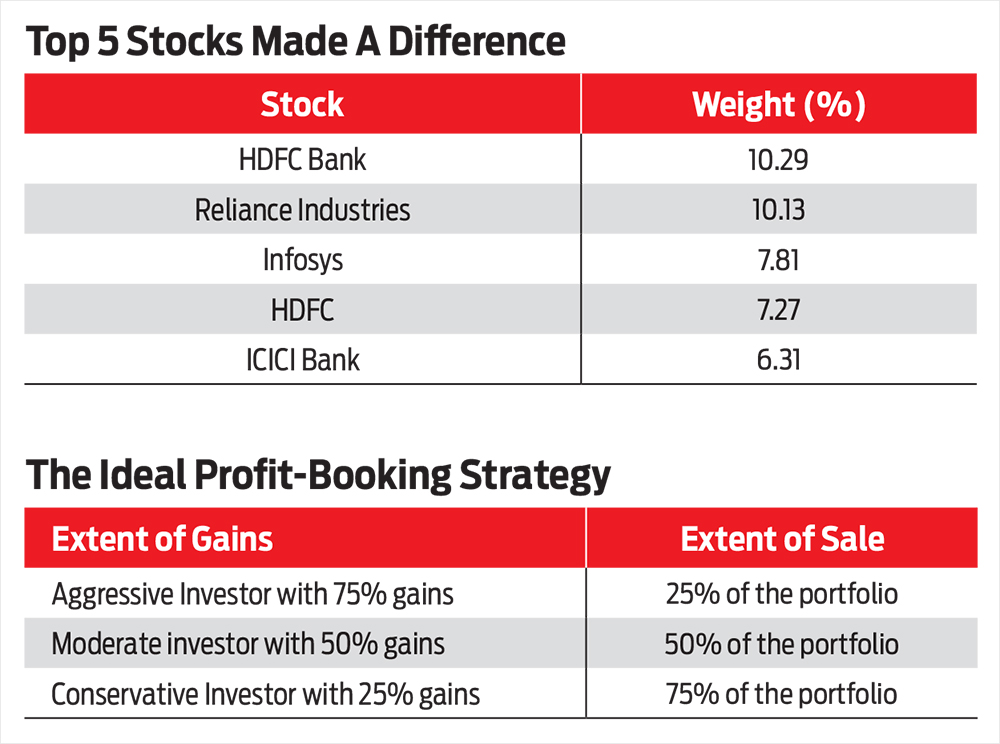 Let’s come back once again to Nifty 50, the Indian market’s most quoted benchmark swings markedly in favour of three critical sectors – financial services, information technology, and oil and gas. So if you have wisely chosen the leading stocks from these sectors, you have certainly done well.

Now, if you had been smart enough to choose just these five counters, you would have made quite a lot of money by now. It is all notional money of course because unless you actually sell your holdings, your money is a mere number made in theory and not in practice.

And that brings us to an interesting question — Is it enough? Is this the time to sell? That question can only be answered by you. Pundits will expect you to sell if your objective has been achieved and if you wish to draw the line and not stretch it any farther.

Book Profit All Along

These words cannot be put more convincingly — sell when you are truly joyous about your portfolio, sell when you still can. That is possible when you shake off the rapture and take the bold step of disposing of your holding, wholly or partially. To what extent will you sell, is an issue that cannot be addressed so easily. But the merits of profit-booking along the way cannot be over-emphasised.

The “wealth in the short term” principle is intertwined here. Any sale transaction, mind you, will attract capital gains tax for the one who has made money in the stock market. Such a transaction, just like a purchase, will also mean payment of brokerage. All these are expenses for the investor. Indeed, transaction costs are a serious affair. The impact deserves to be appreciated fully.

Now, despite the obvious risks, there are all sorts of investors in the stock market. They range from the ultra-conservative to the super-aggressive. For such a wide range, I have tried to marry two diverse elements:

Each investor will have a set of priorities and compulsions. No universal rule can ever exist here, and, if you ask me, no common norm can apply to all. To each his own, and may all deserving investors, irrespective of their risk-orientation, prosper.

The Famous Five Behold Mapping The Road Ahead