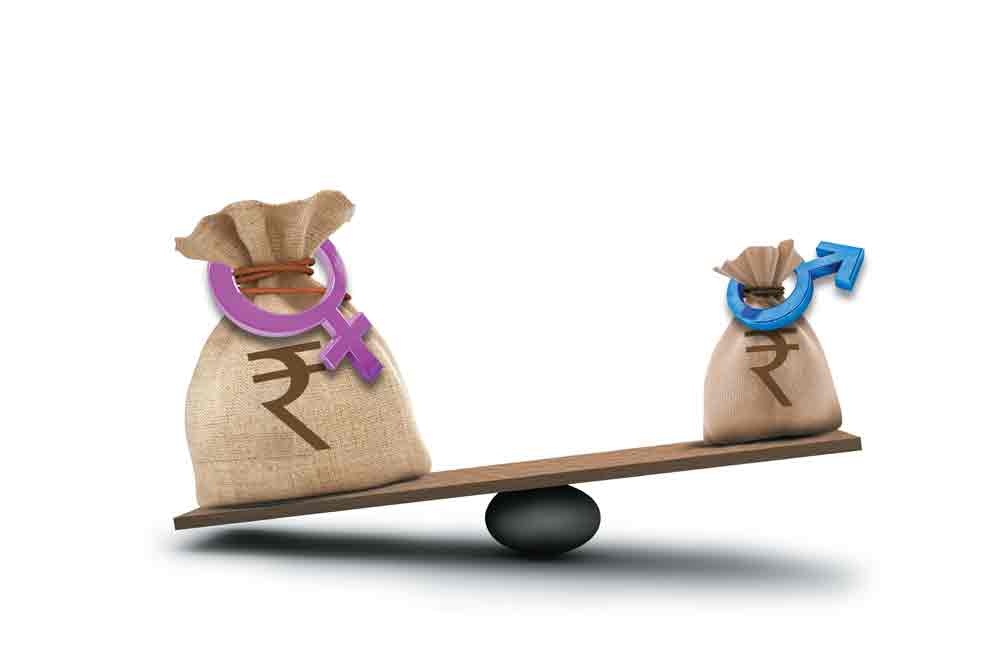 Traditionally, it has been believed that women are weaker than men at least in money matters. This old adage no longer holds true as several studies indicate women are picking up fast and handling finances in a much smarter way than their male counterparts.

The Global Wealth Report, 2018, recently released by Credit Suisse, one of the leading global investment bank, pointed out, “The wealth of women has been receiving increasing attention and we estimate that women account for about 40 per cent of global wealth overall. During the 20th century, their share of wealth rose considerably and, since the year 2000, the level of women’s wealth has risen along with all household wealth, especially in Asia alongside the rise of China’s wealth.”

Even the Boston Consulting Group (BCG)’s digital lending report said, while digital influence is equal amongst men and women, a higher proportion of women end up purchasing loans online than men. This opens up the entire market for digital disruptions. The report further stated traditionally women shop more than men. In the digital age too, they have raced ahead of men. A survey conducted by BCG showed that women, who have access to smartphones and internet, (56 per cent) shop online more as compared to men (54 per cent).

Such tendencies show that women are entering the highest wealth ranks. Despite this trend, even in those countries where progress is the strongest, some section of women – such as single mothers and divorcees – remain disadvantaged. While more is required to be done to ensure that they receive equal opportunities to build up, inherit and share in wealth, there are signs that progress has been happening in many parts of the world, Credit Suisse said  in its report.

Now focusing on trends noteworthy in India - there has been a significant rise in a numbers of personal loans availed by women. Between January and March, personal loans availed by women rose from 14 per cent in 2017 to 16.2 per cent in 2018, a survey done by online lending marketplace IndiaLends showed. The main reason stated in the applications is for investments in tax-saving instruments under Section 80C.

Another overwhelming trends that Moneymood 2019, a report released by BankBazaar, highlighted is that women are becoming increasingly comfortable taking charge of their finances. The contemporary Indian woman is financially independent and aspires to own a house. The report, which focuses on emerging trends in the Indian personal finance sector, analysed the transactions of 169 million unique users who logged on to BankBazaar’s website in 2018.

Out of the total rise in disbursals in 2018, there has been a 10 per cent rise in the number of applications by women. The IndiaLends survey shows post-graduate women to be the primary borrowers (62 per cent) as opposed to graduate women (18 per cent). Gaurav Chopra, Founder, IndiaLends, said, “Although education does not play a primary role in approvals, a higher degree is comparatively preferred for higher loan amounts by lenders. This is because a woman with higher education will be in a better position to repay the loan as there could be a relative difference in the income level due to better job opportunities,”

Adhil Shetty, Founder and CEO, BankBazaar, said, “As the number of women entering the formal sector steadily increases, more and more women are becoming involved in their own and their family’s finances. There is higher participation in financial decision-making by women and they are taking up the responsibility of managing their finances. As a result, the numbers of women opting for loan are also on the rise.” 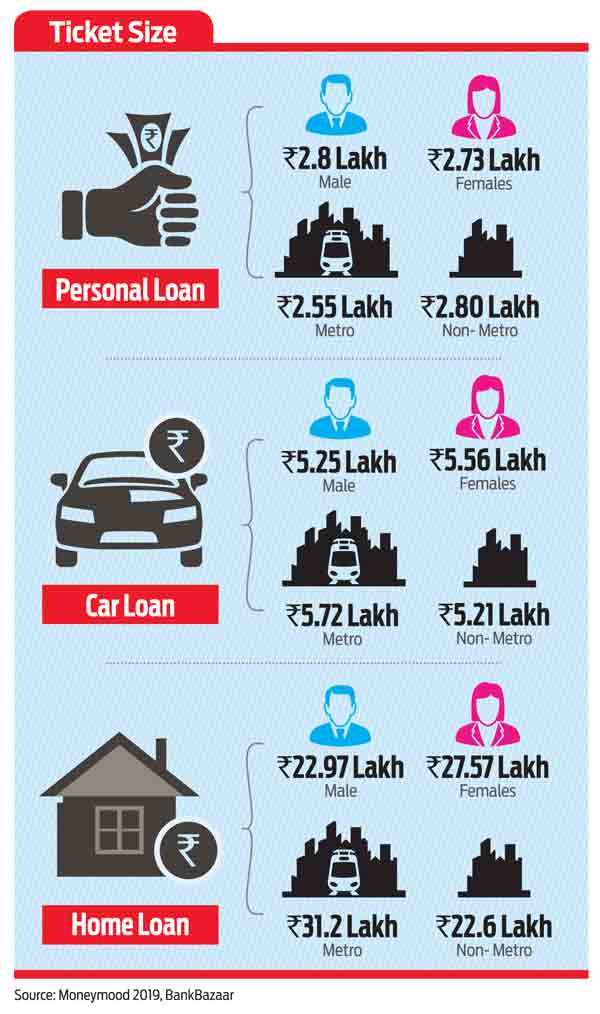 Admitting with him, Raman Kumar, Chairman and Founder, CASHe, a leading personal loan provider, said, “Today, women are actively shouldering financial responsibilities and in many cases are the sole breadwinners.  Besides, women entrepreneurship is also on the rise. The steadily decreasing gender gap and the inherent ability of women to think through and plan ahead is strongly reflective of the key financial and investment decisions they make back home.” Moreover, with easy access to smartphones and the steady progress made in the Indian financial services industry, there has been a drastic growth of financial inclusion among Indian women even in the small towns. 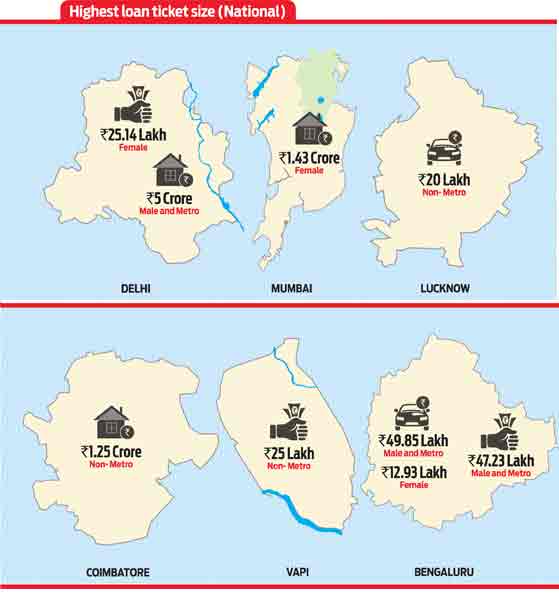 The IndiaLends survey also shows that women applying for a personal loan for tax purposes are relatively higher in metro cities such as Delhi NCR (27 per cent), Bengaluru (15 per cent), and Mumbai (15 per cent). In other cities such as Pune, Kolkata, and Ahmedabad, the application rates stand at nine per cent, five per cent, and three per cent respectively. “The cost of living in metro cities is higher than in non-metro cities. Therefore, there is a large difference in the income level among the women too,” added Chopra.

Another interesting observation from the IndiaLends study is that the trend in credit card approvals is better in comparison to personal loans, especially for women. “Women get easy approval when it comes to credit cards, 17.2 per cent more than men,” Chopra quoted.

BankBazaar’s Moneymood 2019 also echoed similar sentiments. It said, the demand for credit cards was also quite high among women. In the year gone by, women have outperformed men in fulfilling their globetrotting aspirations, with a 73 per cent rise in travel credit card applications as compared to 71.5 per cent applications coming from men. The fastest growth rate for women in credit card is, however, in the fuel cards segment.

This 89 per cent growth in fuel cards applications for women beats lifestyle cards, which grew at 10.49 per cent and travel cards which grew by 73 per cent. Two things are happening here. First, everyone is aware of the benefits of paying by plastic at gas stations, in terms of waiver of service charges, reward points and other perks. Second, this also indicates that women are driving more and equally spending more on fuel.

“The last quarter of the year is usually the period when the maximum lending and investments happen. There are two reasons for this. The first is that the tail end of the financial year is usually when people close the biggest financial decisions – be buying a home or a car or even planning an expensive holiday,” Shetty said and added, “Second, it is also the time when financial institutions close their books. So, lenders recognise this and come up with some of their best schemes and rebates.”

Women are not far behind when it comes to having their own set of wheels either, with the highest car loan ticket size at (`12.93 lakh, indicating an appetite for not just budget but also premium vehicles. They also outperformed men in fulfilling their travelling aspirations, with a 73 per cent rise in travel credit card applications as against 71.5 per cent by men.

A higher credit demand among women is possibly due to ease of availing of loans quickly. As per the report, there is a 198 per cent increase in paperless approvals of personal loans, 11 percent for credit cards and 38.3 per cent rise in car loans.

At CASHe, we have been witnessing a steady growth of 8-10 per cent (month-on-month) in women availing loans. They are reinforcing their financial independence and in many cases are availing various financial benefits offered to them. “Among the millennials, who are impulse buyers, a large chunk are women make their own independent decisions when it comes to shopping, gifting, travelling, which has also been a primary reason for women availing digital loans, are on the rise,” concluded Kumar.