Making Sense Of The Market Leap 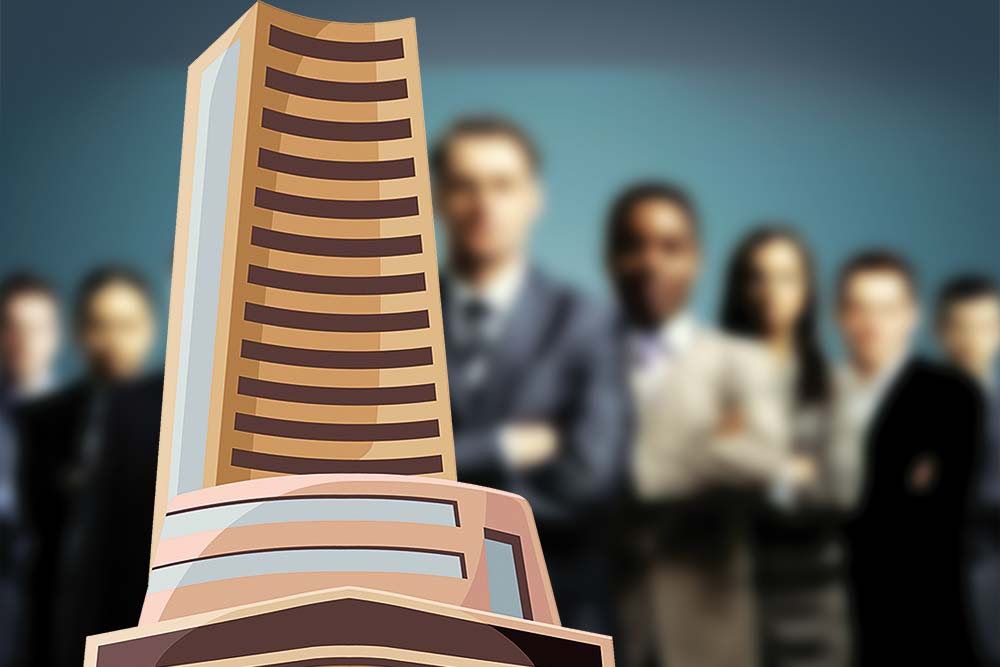 The dichotomy between the economy and the stock market has been one of the biggest enigmas of the past 18 months. The period will be remembered as the best for the stock market, but also one which saw the highest gross domestic product (GDP) contraction in the history of India.

Remarkably, in this calendar year, the Nifty 50 index climbed to its all-time high in 46 out of 180 trading sessions. The Nifty index is a composition of 50 stocks, while the Sensex contains 30 stocks.

The stock market is being supported by adequate liquidity from foreign investors. Thanks to the massive balance sheet expansion by the US central bank, the Federal Reserve, and the European Central Bank (ECB), the world is awash with liquidity. Every month, the Fed is buying bonds worth $120 billion. Its balance sheet is $8.45-trillion-large, a 102 per cent increase on a year-on-year basis. Never in history has any central bank expanded its balance sheet by $4 trillion in a single year. ECB’s balance sheet was worth €8.2 trillion at the end of September, according to Refinitiv. In search of return, money is pouring into high-growth markets like India, which attracted $31 billion in the last one year ending July.

Speaking with Outlook Money, Vijay Bhambwani, head of research, behavioural technical analysis, Equitymaster, says the market is running purely on liquidity. “If a defaulting country like Peru after raising the coupon rate to 3 per cent can get $10-11 billion in a short span, then why won’t the world’s fifth-largest economy with over 6.25 per cent coupon rate get the inflow many times over Peru,” he reasons.

That, coupled with low interest rates on safer investment options, is pushing retail investors into the there-is-no-alternative-to-equities zone. Naturally, the stock market has caught their fancy. In the June quarter, an average of 2.45 million demat accounts were opened per month, according to Securities and Exchange Board of India chief Ajay Tyagi. On average, about 10 lakh new demat accounts were opened per month in FY21.

Apart from liquidity and large inflow from both domestic and foreign institutional investors, are there other reasons that are leading to higher market valuations?

Why Is Nifty Getting A Premium?

Nifty was trading at 21 times FY23 earnings around September-end. The average one-year forward earnings multiples for the past five, 10 and 15 years was 20, 18 and 17.5, respectively. As indicated by the data, Nifty is trading at a higher premium now as compared to its historical performance. Nifty is also trading at a 68 per cent premium to emerging markets’ average earnings multiples, according to a Nomura report, dated August 30, 2021.

So why is Nifty commanding such a high premium? The first reason is strong corporate earnings that are not volatile in nature. Another is moderate inflation of 4-5 per cent in a world where even 2 per cent inflation is too much to ask for. For instance, in the US, the 10-year
sovereign bond is yielding just 1.34 per cent, while $16.5 trillion of bonds globally have a negative yield.

Right now, India’s inflation is both structurally low and cyclically tame, and is unlikely to be a cause of any major equity selloff, according to a report by Canada-based BCA Research, titled ‘Can Inflation upset the Indian Applecart?’, which was released on September 9, 2021.

The repeated resilience of indices in the face of negative news, such as Covid-related stress, global supply chain disruption, rising commodity prices and the Evergrande crisis, begs an explanation for such an impressive performance and leads to some key questions. Are the current market valuations justified? Why is the Nifty trading at a premium?

What’s The Rationale Behind The Bull Run?

Experts are unanimous that though the strong inflow of capital along with cheaper credit is feeding excessive optimism into the market, it is still far away from a bubble. Market participants believe that re-rating of many sectors, especially banking and metals, and corporate deleveraging on the back of strong earnings growth is fuelling the upward movement of the index.

For starters, it is important to understand the two factors that decide the direction of the equity market—price of money or the interest rate and the expectation of corporate earnings growth.

For the stock market to move up, interest rates must fall, and corporate profit must rise. Between February 2019 and September 2021, the Reserve Bank of India’s (RBI) repo rate came down from 6.5 per cent to 4 per cent, the lowest level since 2000. Slowly and steadily, banks passed on the reduced rates to corporates and households. Lower interest cost also meaningfully reduced the debt burden for heavily leveraged Indian corporates and improved their profits. 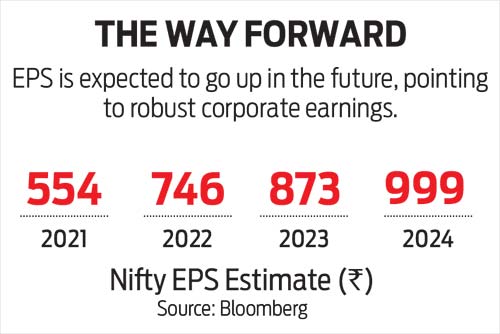 The biggest overhang on the corporate balance sheet was debt and, for a change, instead of amassing debt, corporate India was repaying loans. A leaner balance sheet has become the mantra for a host of companies now.

Sandeep Shenoy, a market veteran and the executive director of Mumbai-based investment boutique firm Pioneer Invest Corporation, says the saving on the back of low interest rates and the rapid pace of deleveraging by corporate India are fuelling the market rally.

Tata Steel along with a few other steel and cement companies recently announced new capex plans. New capex plans are undertaken only when firms are confident of strengthening demand. Besides, capex usually comes on the heels of rising profits.

Revival of the banking sector: Massive corporate deleveraging ushered a watershed moment for Indian banks that were grappling with bad loans and non-performing assets (NPAs). The banking and financial sector contributes 37.58 per cent to index weightage, the largest among all sectors.

Harshad Borawake, head of research, Mirae Asset Investment Managers, says the outlook for the Nifty earnings has improved primarily due to the improvement in the financial sector earnings and financial companies are gradually getting re-rated by the street.

“Bad days for banks are over as provisioning cycle has normalised,” he says.  Maybe banks’ loan book growth will remain subdued, but profits will come from reduced provisioning, he adds.

According to Bloomberg’s street consensus estimate, the financials are expected to have a 23-24 per cent compounded annual growth rate (CAGR) between FY20 and FY24, with a share of about 31 per cent in FY24 in Nifty companies’ earnings.

“As per the street estimate, in just three years, financial companies’ profits may get doubled and this is providing strength to the Nifty,” says Borawake. This optimism is well captured in the share price of State Bank of India, India’s largest public sector bank, which  gave a handsome return of 150 per cent in the last one year. 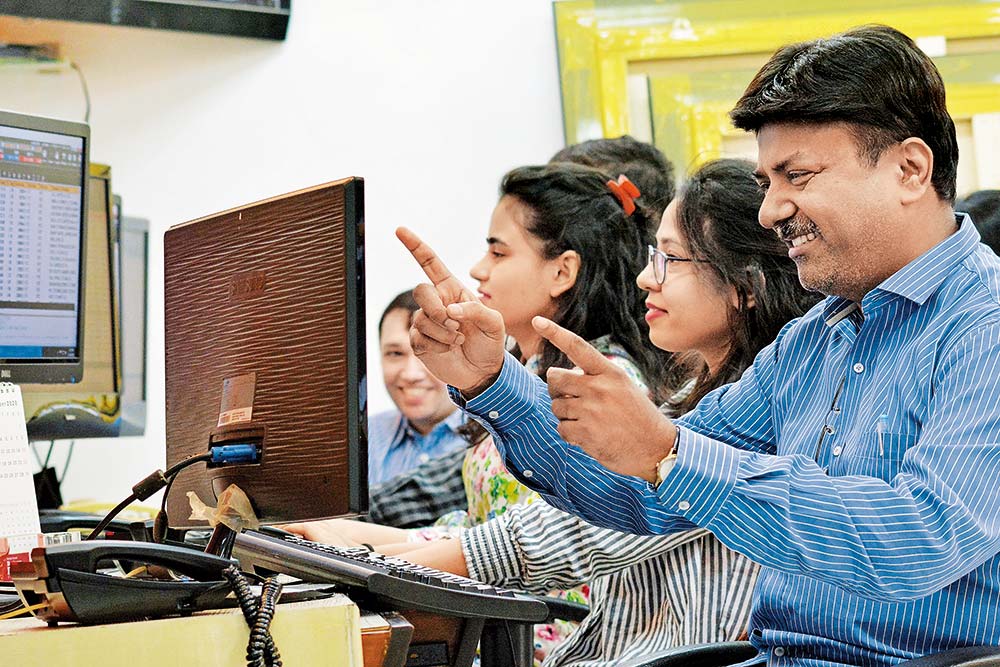 In 2018, banks were making a provision of 2-2.2 per cent of total assets, which has now come down to 0.8 per cent. Reduced provisioning is strengthening the bottomline and earnings per share of financials that are part of the Nifty. “Almost 60 per cent of future profits may come from normalisation of provisioning,” adds Borawake.

Metals, especially steel, is a major sector that got re-rated this year on the back of high commodity prices and supply chain disruption across the globe. In the last one year, Tata Steel was the best performing stock, providing over 270 per cent return.

As per the NSE website, the Nifty Metal index with 136 per cent price return was the best performing sectoral index in the last one year. Metals have just 3.75 per cent weight in the Nifty but, through deleveraging, it played a significant role in boosting banks earnings’ and the index’s upmove.

After Covid broke out, this trend became more pronounced. In the June 2020 quarter, only a few large-caps like Reliance, Infosys and TCS made a massive move. “In times of distress, market participants pour money into strong and sound large-caps only,” says Gaurav Misra, head of equities, Mirae Asset Investment Managers (India) Private Limited. The fact that Indian corporates are deriving more revenue from overseas market is also balancing out the sluggishness in the Indian economy, he adds.

Sharma has a point, as with 18 per cent weightage, IT is the second-largest component of the Nifty and in FY21, major IT companies like HCL Tech, Infosys, Wipro and TCS derived 61 per cent, 59 per cent, 57 per cent and 48 per cent revenue, respectively, from the overseas market.

The Rise Of Retail Investors

The Indian markets are seeing record inflows both from domestic investors and foreign institutions. According to Bloomberg, in the last 12 months, ending July 2021, India received $31.26 billion (Rs 2.34 lakh crore), which was the largest foreign fund flow in the emerging markets.

The soaring index has emboldened retail customers, who are now directly dabbling into equities. For many of them buy-and-hold is a dud philosophy. “You neither get any thrill nor do you make substantial money if you follow the buy-and-hold strategy in a higher moving market,” says Vibhuti Mohanty, a Nagpur-based trader. Retail participants like Mohanty have forgotten the basic law of science that states that the “higher it goes, the harder it falls”.

The massive bull run in the last 18 months has created a trading frenzy and that is evident from the trading volume in the futures and options (F&O) segment.

In the last three months, five different days have seen F&O volume crossing Rs 100 lakh crore. The market capitalisation of all BSE-listed companies on September 24 was Rs 261 lakh crore, which is unprecedented. This implies that in a single day, over 38 per cent of the total stock market cap of Indian stocks are getting traded in the F&O segment.

If one analyses the historical bubbles of all stock markets, one thing will stand out: that the crest of market euphoria has always corresponded with the trough of rationality among the participants. The retail trading frenzy that has gripped the Indian market indicates high optimism among investors who may be believing that the market can move only in one direction, that is, upwards. But that’s not always true.

Therefore, retail investors should always exercise cautious optimism and not treat the stock market as a casino. Outlook Money spoke to multiple new retail investors and realised that a lot of them do not understand why the market is trending upwards. A large segment of retail investors has a shallow knowledge of financial and economic nuances but deep conviction in the India growth story. What this set of investors needs to remember is that sometimes, high potential equals hype potential.

“Demand and supply are always equal at any price. The prices move along the direction of the more anxious among  buyers and sellers in the short term. Yet history of the market is witness that the impatient shall become the lunch of the patient,” says Sushil Kedia, founder and chief executive officer, Kedianomics, one of India’s largest technical analysis firm.

Investors are conspicuously ignoring the golden rule of “mean reversion”, which states that what goes up also comes down and asset prices tend to converge at an average price over time. The mean reversion theory cautions investors to keep their enthusiasm in check.

But in a market frenzy when the Nifty’s three months’ return (over 13 per cent) is more than twice of what annual fixed deposits are returning (5-6 per cent), how many of them are ready to hear and follow cautious advice is anybody’s guess.