Law Layed Down For The Developers

Home »  Magazine »  Law Layed Down For The Developers 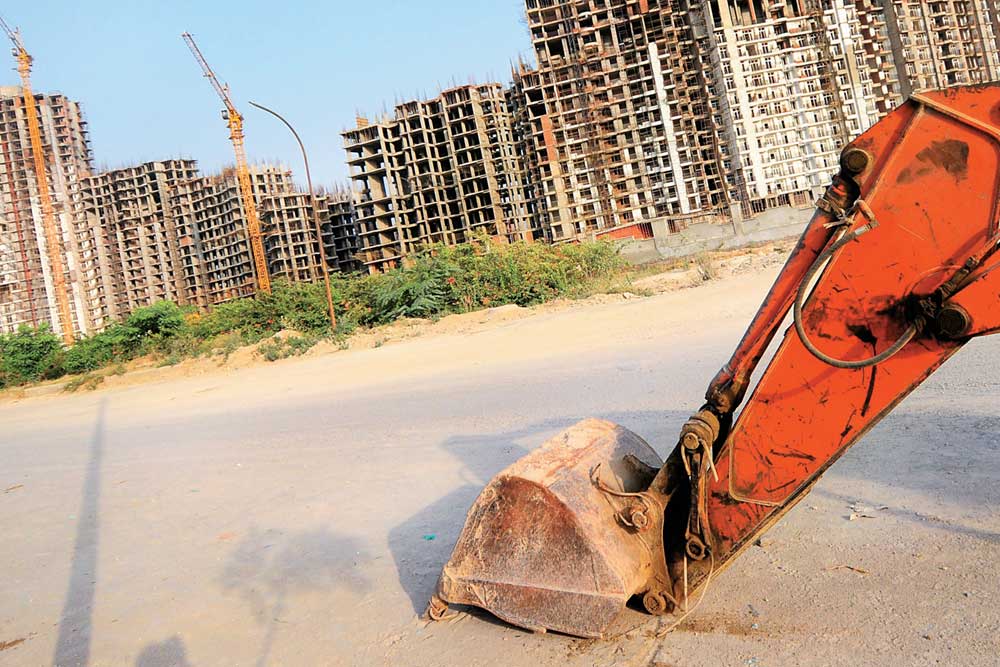 It was in 2010 that Pashupati Sharma, a Delhi resident, booked a flat in Amrapali Group’s Smart City project in Noida Extension. He was around 33 years old at that time and his daughter was just a few months old. He had bought the flat with a hope that his daughter would grow in her own home instead of a rented one. Today his daughter is already 10 years old and he is still living in a rented accommodation in Noida Extension area with no idea when he would get his flat and whether her daughter would be able to experience living in her own home before she moves out for higher studies.

There are tens of thousands of such stories across the country, especially in Noida and Greater Noida, where home buyers are still awaiting possession of their homes despite pay-ing the full cost of their flats. Most of them are paying their EMIs for almost a decade and paying rent at the same time because they are not able to move into their homes which were due to them  years back.

According to a research by ANAROCK property consultants, as many as 220 projects equalling 1.74 lakh homes are completely stalled in the top-seven cities alone. Launched either in 2013 or before, these projects have absolutely no construction activity going on. The overall value of all stalled units is estimated to be more than `1,774 billion. Most of these projects have been grounded due to either liquidity issues or litigations. Almost 66 per cent of these stalled units (approx. 1.15 lakh homes with approximate cost of  `1,111 billion) have already been sold to buyers who have been left in the lurch - at the mercy of either the concerned developers or the law of the land.

Many of these buyers had been running from pillar to post, holding protests and candle marches, writing to ministers and even the Prime Minister, and fighting legal battles in courts to get what was due to them years ago. And after this long and arduous battle, they have finally found some hope as in one of such high-profile cases, the Supreme Court re-cently appointed National Buildings Construction Corporation (NBCC) to complete “as expeditiously as possible” the projects of crisis-hit realtor Amrapali Group. The apex court also cancelled the registration of Amrapali group under the Real Estate Regulation and De-velopment Act (RERA) 2016. In a 270-page judgement, a bench of Justices Arun Mishra and U U Lalit said the NBCC would complete the various projects at a commission of eight per cent and hand over the possession to  the buyers.

For Sharma, the Supreme Court judgement has given him, and many others like him, a fresh hope of getting his home in two to three years time. “Before the Supreme Court order, we used to feel that the whole system is hand in gloves with the builder and there was no one to address the woes of the flatbuyers who had invested their hard-earned savings in those homes. From banks that did not give any relief in EMIs to the government machinery, everyone was involved in the crisis but it was only the buyers like us who suffered as banks kept charging the interest. But after the Supreme Court ruling, we again have hope that we would get out homes,” he said. 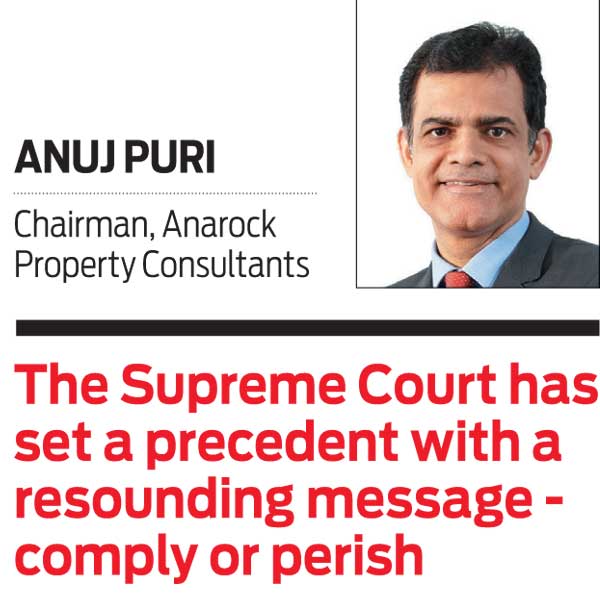 Sharma was supposed to get his flat in 2013, but the builder cancelled the whole project and shifted him to another project called Dream Valley. The construction on the same has been stalled since 2014-15 and now NBCC is expected to deliver it in next two to three years. 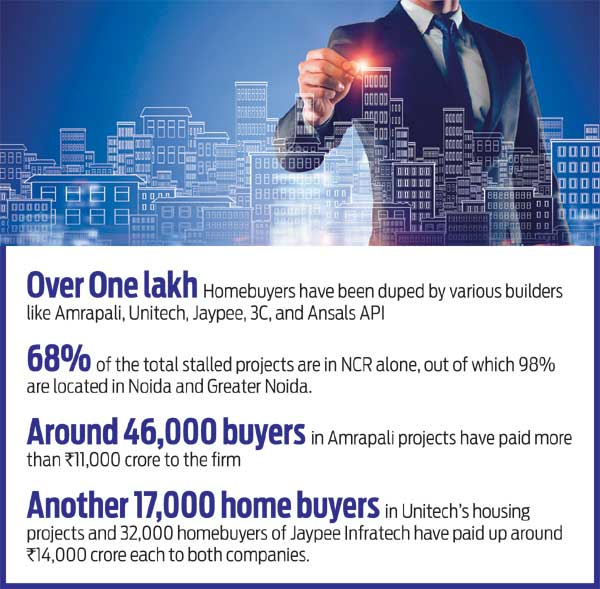 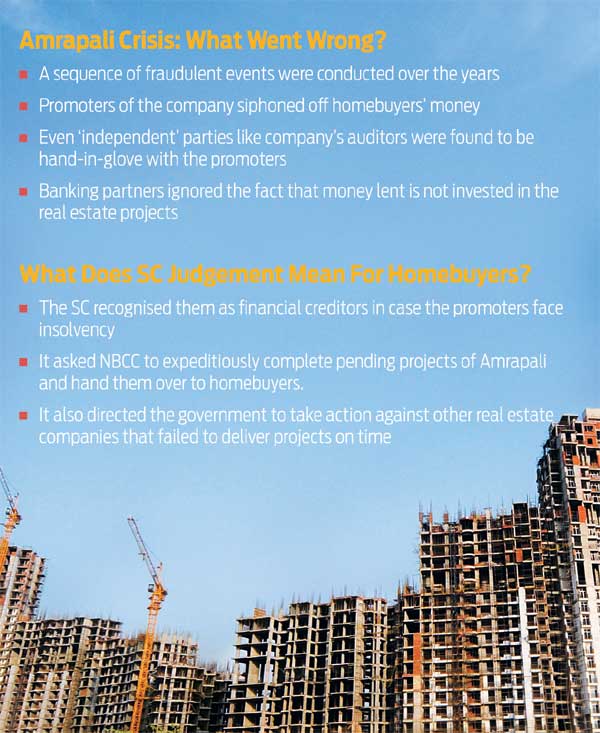 While the Supreme Court’s judgement came in only Amrapali’s case, it is expected to have far-reaching consequences on the ailing sector as it is for the first time the top court also held the government authorities and banks accountable for connivance with the builder and ruled that they would have no right to sell the flats of the homebuyers to recover the dues. Not only that it also directed the Enforcement Directorate to investigate the alleged money laundering by Amrapali Chief Managing Director Anil Sharma and other directors and senior officials of the group.

Homebuyers feel this judgment would act as a deterrent for fraudulent builders as well as authorities from acting in connivance with each other against the interests of homebuyers. Dejected by lack of corrective action by all authorities, including the government and the Real Estate Regulatory Authority, most homebuyers agree that judiciary’s intervention came only after all other agencies failed to provide any justice to homebuyers.

“Government’s role is important only when there is a crisis. When things are going good, people don’t expect too much from it. But if the government also gives up when people are facing such a big crisis, then people will lose faith and will react in a bad way,” Sharma said. However, he adds that the example set by the Supreme Court would go a long way to restore people’s trust in the system even as the government authorities need to pull up their socks and check any such crisis from repeating in future.

Industry experts also believe that the landmark judgement would bring some much-needed reform in the ailing sector. According to Atul Pandey, Partner, Khaitan & Co, real estate firms can no longer keep the homebuyers in waiting for delivery of flats.

“The Hon’ble Court has directed the Central and state governments to ensure that appropriate action is taken as against real estate companies concerning such similar projects at Noida and Greater Noida and other places in various states, where projects have not been completed. These governments have further been directed to ensure that projects are completed in a time-bound manner as contemplated in RERA and that home buyers are not defrauded. Amrapali homebuyers can take a sigh of relief as NBCC, a Government of India enterprise, has been directed by the Court to complete the various projects and hand over the possession to the buyers,” he said.

According to ANAROCK research, NCR has the largest pile-up of stalled units with `1.18 lakh homes (68 per cent of the total stuck stock) spread over 67 projects with an overall value of `822 billion. Of this, nearly 69 per cent (or 83,470 units) are already sold out. 98 per cent of the stuck projects in NCR are located in Noida and Greater Noida alone, while other cities like Gurugram, Ghaziabad have  minimal inventory.

Industry observers said that Amrapali Group, most of whose projects are also in Noida and Greater Noida region, is a clear case of fraud, conducted on homebuyers.

Anuj Puri, Chairman, ANAROCK Property Consultants, said the Supreme Court’s “land-mark decree” on Amrapali Developers has rekindled the hopes lakhs of homebuyers across cities who have waited futilely for delivery of  their homes.

“While similar developments with regards to other stuck projects are awaited, the Supreme Court has now set a precedent with a resounding message - comply or perish. The Amrapali verdict certainly indicates a strong new pro-consumer course set by the judiciary.

However, it cannot be said to be a template verdict which can be liberally applied to all stuck or heavily projects as every case is different and needs to be judged by its own unique circumstances and merits. That said, it seems fairly certain now that the judiciary intends to take a strong stance on stuck projects and take all measures necessary to salvage aggrieved buyers anywhere in the country. This is certainly necessary,” he said.

Legal expert Chinmay Bhosale, Partner, SRB OJAS, called the judgement on Amrapali “path breaking” and said the Supreme Court coming down heavily with iron fists on the erring Real Estate sector which was afflicted by over trading, more particularly in the decade of 2000-2010, has made sure that the Real Estate sector as well as the connected authorities are answerable to the public, and  rightly so.

“In my considered opinion, this is the only way in which the Real Estate sector will thrive in India in future, by upholding the trust of the public. This verdict is a huge relief to the home buyers. It essentially has established their right over the homes they have purchased as their fundamental right as enshrined under Article 21 of the Constitution of India. Also it has recognised them as Financial Creditors during an insolvency proceeding. However, it would not mean a closure to their long battle to get a home, since practical hurdles to get the projects completed still need to be tackled,” he said.

Bhosale added that the verdict has also come as a wakeup call for all the stakeholders of the real estate sector that blind faith cannot be put by the consumers and the banks in the promoters. Also, it has stirred up a hornet’s nest where the government authorities have acted hands in glove with the promoters, which has ultimately put the consumers at risk. 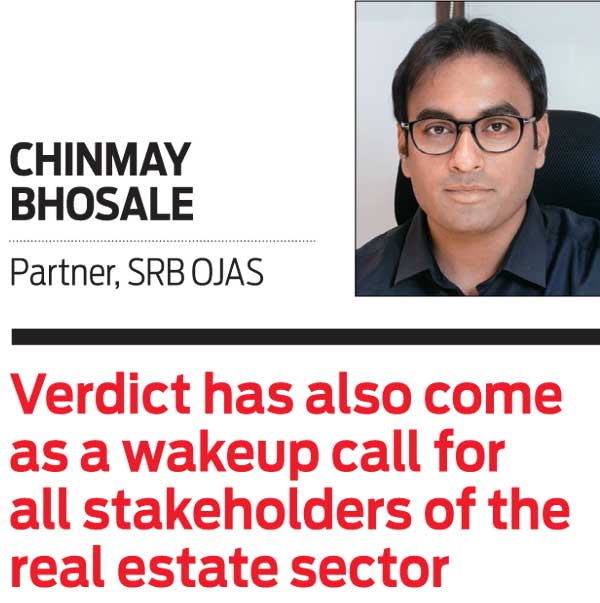 “This verdict has given the much needed clarity to the lacs of consumers of undelivered houses. Cases like Jaypee will also eventually see similar results, where the home buyers are rightly protected and the errant promoters are put to task for their acts,” he added.

The Amrapali case has brought out the red in everyone’s ledger. The wrong doings recorded by the Supreme Court in this case range from the promoters siphoning off money, to auditors being hands in glove, to banking partners ignoring the fact that money lent is not invested in the real estate projects, and to government authorities not monitoring the leases of land grants given to the developer.

“This unfortunately is the truth infecting majority segment of real estate sector. For the real estate sector to run smoothly, each of these segments need to be held accountable on every ground. Only then such major mishaps will be averted, and also the industry at large will thrive and prosper,” Bhosale said.

Talking about many lessons that could be drawn from the Amrapali crisis, Atul Pandey said that first and foremost, future homebuyers must conduct a thorough due diligence on the real estate firm, in order to ensure that the project is registered under RERA and escalate any delay in delivery to the statutory authorities at the earliest.

“Anybody investing in this sector (as a homebuyer or as shareholder in the company) should do a deep dive into the real estate firm before committing to invest. Real estate firm owners should develop the understanding of their obligations under RERA. Governmental authorities should not unnecessarily hold up the grant of NOCs. I also come across many projects being stuck in litigations that are lodged by unscrupulous parties – courts should consider the bona fide of such petitioners to ensure that interest of genuine homebuyers is protected,” he said.

Pandey added that there was a sequence of fraudulent events that were conducted over these years and promoters of the company siphoned off monies from homebuyers at regular intervals, and even ‘independent’ parties like company’s auditors were hand-in-glove with the promoters of Amrapali.

“This judgment certainly brings positive news for the home buyers. The Hon’ble Court in Amrapali has given preference to interests of homebuyers over and above the interests of other financial creditors like banks and financial institutions. But it remains to be seen how other cases like Jaypee (which are under acute financial stress) will practically play out. The RERA was promulgated with the objective of protecting the interest of homebuyers, and I believe it is time for authorities to ensure that it is properly implemented. Accounts of companies which have a history of defaulting should be examined,” he further concluded.

Evaluating The Essence Of Conventional Instruments