It Takes A Tap To Bank 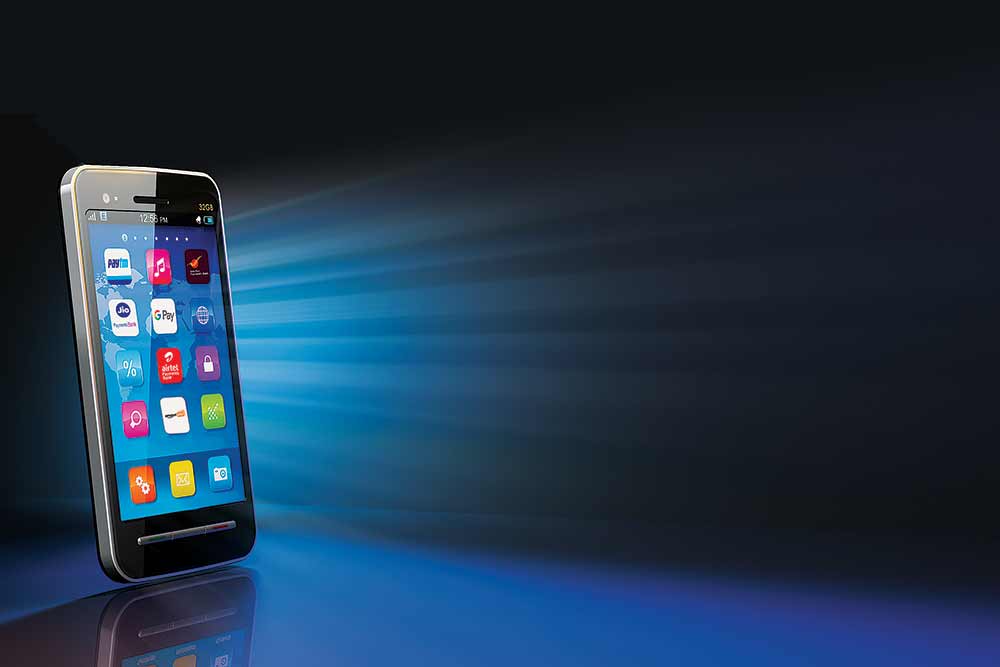 You can’t escape the long queue of people with each one of them waiting to ask a dozen questions to the man at the counter. No matter how hard it is, you have to fill up the small boxes using the best of your calligraphic skills on those rectangular pieces of paper if you want to square your deal. You can’t say no to a formal, official letter in black and white if you need to authorise someone to fill in for you. And, lastly you must practise your signature a hundred times if you want your cheque to be processed at one go.

That’s the bank pre-millennial Indians have seen and grown up with. All this was normal for them, all the sulking and cursing stowed in. As the pandemic split the world into two, many pre-Covid practices began transforming into their post-Covid neo-normal avatars. That made the beginning of a bull run for the digital-only banks.

The brick-and-mortar banks had been running the risk of losing customers with time mismatches and manpower issues adding to a rise in customer discontent. “It became important for banks to ascend with the next wave in banking, which scales the entire bank down to the size of an iPad, tablet or smartphone, and promises the convenience of having an entire bank on our fingertips,” says a study by Infosys. That is the world of digital-only banking.

A neo-bank or a digital-only bank operates exclusively online, using the internet and cloud computing. The pandemic-induced restrictions on mobility and social distancing fostered the growth of these neo-banks and their future is sealed with the digital disruption transforming our lives completely.

A digital revolution sweeping through the world in the 21st century has redefined and reshaped the customer relationship with banks. Increasingly high-end banking expectations of the millennial generation paved the way for the emergence of digital-only banks around the world. Brazil and Germany are leading the pack with 28 per cent of citizens holding digital-only bank accounts. “A new experience-centred generation, with higher expectations and lower loyalty appears, pressuring banks to review their online services,” says a Deloitte analysis on the evolving digital banking system.

With access to bank branches being restricted, working hours being shortened, and the fear of contamination from paper bills and coins gripping every individual, the Covid crisis gave the wave of digital disruption renewed thrusts. “What we’re seeing is the greatest acceleration of digital banking in history,” American Banker magazine quoted Wells Fargo Securities analyst Mike Mayo in its June issue. “What’s taken place over the last few months may have taken place over two to 10 years” if the pandemic had not come along.

A recent Finder survey covering 2,512 people, shows that around 22 per cent Indians – an estimated 205 million – have a digital-only bank account and, over the next four years, 43 per cent Indians – around 400 million – are expected to join the league. Around 12 per cent respondents said they plan to open a digital-only or 100 per cent online bank account and an additional 9 per cent said they plan to open one over the next five years. Put together, more than 397 million Indians are expected to hold online-only bank accounts in the next five years.

“The pandemic gave a big push to the growing digital financial services sector in India,” says Anubrata Biswas, Managing Director and Chief Executive Officer of Airtel Payments Bank. His company is hoping to break even this fiscal following a surge in business volumes last year. The lockdown curbs and reverse migration spurred new accounts as well as transactions for the neo-bank. Airtel Payments Bank recorded an uptake as customers cutting across the rural-urban divide sought banking solutions at hand with convenience and security for their money.

“Out of the 380 million users consuming digital content, only 170-180 million subscribe to digital financial services. This leaves a big gap of 200 millions,” points out Biswas. “The need is to serve these users with a digital solution that ties all banking needs together. India has fewer per-capita bank branches compared to most developed economies as retail banking is driven by high cost of services. For digital banks, serving the same customer through technology comes at one-tenth of the cost that a traditional bank bears. What works more to the customer’s advantage is the intuitive user interface and a greater degree of access.”

The digital-only banks in India are still non-banks that operate in partnership with traditional lenders. The spectrum of their services includes account opening, funds transfer, payments, loan applications, tracking of expenditure, budgeting guidance and so on. The country has around 17 neo-banks and the league is led by biggies like InstantPay, Jupiter, Niyo, Walrus, Open, Yono, 811 and DigiBank.

Digital banking is not new to the country. Digitisation of banking processes was limited to the bank branch until 2016, when the sector launched the Unified Payments Interface (UPI). The real-time payment system was developed by the National Payments Corporation of India to facilitate inter-bank transactions. The interface is regulated by the Reserve Bank of India. The 2016 demonetisation and the government’s subsequent push for transforming India into a cashless economy fostered the growth of digital wallets.

We have seen how people thrived on virtual coffers like Paytm, Amazon Pay, Freecharge, Google Pay, MobiKwik, Airtel Money and ICICI Pocket through the Covid days. The floating of the $2.23-billion public issue of Paytm reflects the overwhelming success of digital wallets.

Payment banks evolved naturally from this fast-transforming dynamics with the banking regulator allowing companies like Airtel Payments Bank, India Post Payments Bank and Jio Payments Bank to venture into the domain. There have been some entrants from the wallets space as well. The likes of Google, Amazon, Paytm and Airtel use the UPI platform through which you can add money to your digital wallet straight from your bank account, UPO, BHIM UPI or credit card, and then use it to pay your bills and other transactions.

The next banking revolution came in the form of neo-banks. These banks operate on the concept of Application Programming Interface or API. And are basically a bridge between software programs, facilitating third-party applications like digital payment gateways to synchronise and connect to a bank’s tools and services. Through the API platform, both banks and third-party companies can serve their complementary specialties and offerings in a much better and more convenient way to their customers.

“An open and flexible banking approach means more  consumers will embrace digital banking,” Sonbarse says. The InstantPay website says it processes one million transactions a day. With 10 million active customers a month, the neo-bank clocks a quarterly transaction value of over $1 billion.

Neo-banks create a tech layer on top of traditional banking accounts to ease out the process. The customer’s money stays with the underlying bank, which minimises risks. There are periodic regulatory compliances and audits to ensure security. “Banks are taking care of what they are best at – handling customer’s money – and neo-banks are taking care of the rest,” says the InstantPay co-founder.

India’s evolving digital ecosystem has been conducive for the growth of the fintech sector and, with 87 per cent adoption rate, the country has surpassed the global average of 64 per cent. This has fuelled the growth of neo-banks in India. The convenience of making specialised transactions even from a smartphone, an easy-to-use interface, and a faster turnaround time for opening accounts or processing other requests have been the biggest draw when it comes to digital-only banks.

It’s not just the customer who’s taking all the goodies. Financial service providers can set up neo-banks at costs much lower compared to traditional banks. The neo-banks pass on this benefit to customers by charging very little or no monthly fees.

The digital-only banks are free of credit risks and government regulations. They offer flawless international payments, advanced services like recommendations based on customer activity, and are known for targeting a niche customer segment like the tech-savvy young adults and low-income salaried individuals.

For small businesses the major areas of concern involve paying business taxes, making payments to employees, and sticking to government regulations. All these add up to a significant time. A neo-bank helps cut down on these long process by digitising the manual work and at the same time offer exclusive and personalised services to overcome these challenges.

“Customers have now understood the power of digital, we see rapid innovation and product-partnerships with traditional banks which have had a setback because of the pandemic. Customer acquisitions have already gone up and we expect a similar hockey stick growth for the next few years,” says Sonbarse.

Security is integral to any kind of financial services. The neo-banks implement powerful measures like two-factor authentication, biometric verification, Role-Based Access Control (RBAC) and encryption technology to protect customer data related to transactions. And, more recently, India has marked the entry of Cashaa – a joint venture with The United Multistate Credit Co Operative Society or UNICAS – as the first crypto-friendly neo-bank in India.

Despite hitting the fast lane, the digital-only banks face a bumpy ride on the Indian turf, primarily because of the regulatory bottlenecks. These banks are not yet in the RBI regulatory regime. Lack of banking licence makes the future somewhat uncertain for the neo-banks. They don’t know if they will be ever allowed to offer loans on their books and raise public deposits as a sole bank. So, for now, they must stick to the parentship with the traditional banks to stay afloat.

“Neo-banks operate under different arrangements with different banks bound by contracts (indirectly regulated), strict information security compliances and audits. We expect regulators to formulate some policies and regulations in the near future,” suggests Sonbarse.

Another major challenge for digital-only banks is the absence of efficient digital connectivity in rural India. Despite being home to more than 65 per cent of the population – over 895.3 million people live in villages – rural India accounts for just 52 per cent of the country’s 504-million-strong active internet user base. This translates to roughly only one in four non-urban consumers actively using the internet.

The other issue is that of trust. The business of lending, borrowing, and managing money requires the transacting parties to assume good faith – and people trust what is familiar over what is new. Non-metropolitan consumers are more accustomed to offline banking channels and are, therefore, more likely to opt for the good-old systems over their digital alternatives which, they feel, can easily be manipulated.

The SME credit sector offers a great opportunity for the digital-only banks since this is one segment where the traditional banks lag. Simply offering a platform for the SMEs to help them track their cash flow, tax filings, managing their transaction records can solve the issue. Not to forget, the lower UPI transfer fees or interchange costs may not be of profit for the neo-banks in the long run. Above all, the customer should be comfortable using the digital banking technology.

With the evolution of financial technology, we can expect a healthy co-existence of digital-only banks and the traditional ones. While the digital-only banks offer the convenience, speed, accessibility and cost-advantage in everyday monetary transactions, it is still difficult to imagine that major life-changing decisions like buying a property or a dream car or making long-term investments can take place without any human-to-human interaction.

The author is a technology writer and columnist

It’s Her Life, She Has To Plan It Herself

Trust Your Financial Plans, Keep Your Fear At Bay