Is Cash Still The King? 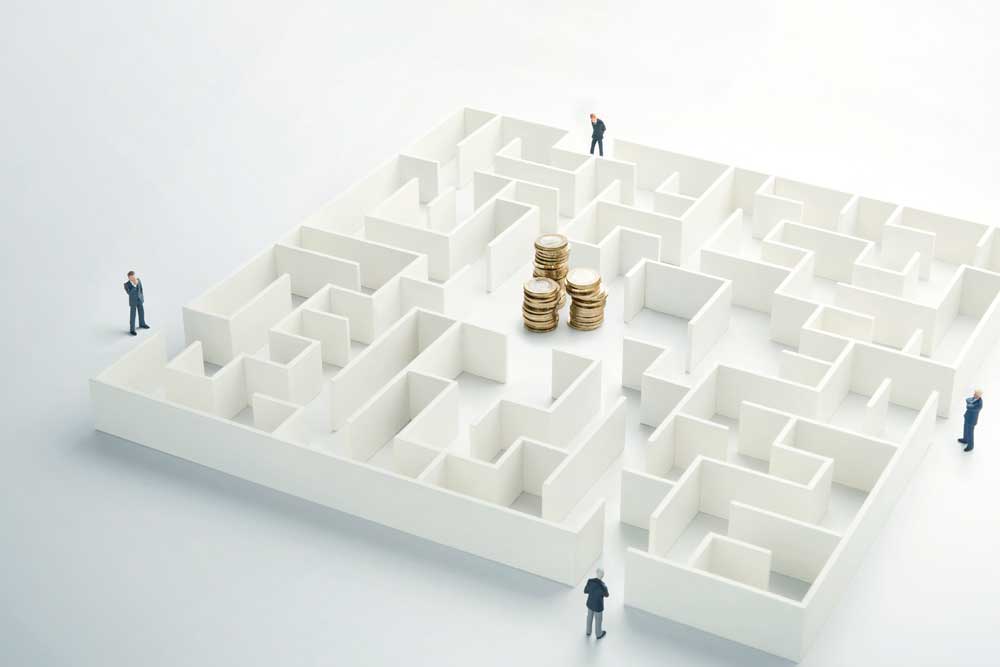 While every now and then, the government keeps harping about reducing cash transactions, there are several Indians who still earn in cash heavily to evade taxes. Most of the time these people cannot invest in regular instruments like a mutual fund or a fixed deposit.

Then how do they grow their money?A detailed discussion with financial experts revealed that either these people invest in real estate or in physical gold. Despite this, they forfeit the opportunity of yielding better returns, which they could have garnered had they been not earning and investing money in cash.

Even though following demonetisation, the habit of earning and spending in cash has been arrested to some extent, the practice is still rampant. The only difference is that, people are now a bit more wary of flaunting their cash, as  such, an act that might attract the taxman’s lens.

However, when this very cash starts hurting after a point of time, people start looking for appropriate avenues to park it.

Renu Maheshwari, CEO and Principal Advisor, Finscholarz Wealth Managers, says, “Over hundreds of years in India, we have developed a tradition of earning, spending, accumulating and investing in cash to stay off the radar of the alien government.”

She adds, saying, “This whole system runs smoothly parallel to the organised banking and financial channel. With an alien government, society did not treat tax evaders as financial criminals; rather they are the admired ‘Robin Hoods’ who are able to outsmart the ruler’s system. We do not feel responsible for funding the societal causes (roads and hospitals) through the system. It is the government’s job! Corrupt politicians and bureaucrats have helped perpetuate this frame  of mind.”

Rajesh Cheruvu, Chief Investment Officer, Validus Wealth, says, investments held in cash may or may not yield hefty returns. Assets held in cash are mainly illiquid or tangible ones such as real estate and gold.

“These are cyclical assets and taking exposure in them would entail a judgement of where one is within their respective super-cycles. As a side-benefit, tax evasion is a part bonus since there is not much of a paper trail of asset and money flows. The opportunity cost of holding these assets is the wealth creation that can likely pan out in safer more liquid assets that offer blended growth and stability,” he says. This whole cycle of cash economy appears to be lucrative because taxes can be easily evaded; but numbers reveal a different picture.

Maheshwari explains, while non-payment of taxes is positive in terms of amount of money left in hand for consumption and investment—the negative impacts of cash are considerable.

When they earn in cash, they know there is a lack of investment opportunities. With laws becoming more stringent and tracing of account details becoming easier because of Aadhaar linked PAN, investing in the formal markets have become impervious. Needless to say it is a huge opportunity cost in terms of investment and wealth creation.

Upfront loading takes place when cash flow is more. Most surplus cash is moved to physical gold and real estate. While gold is liquid and can be bought in smaller and large quantities alike, making charges and premium needs to be paid. These charges can range anywhere between eight per cent to 16 per cent. This reduces the initial investment amount by that percentage. Overall the wealth creation is adversely affected by this upfront loading.

On the other hand, real estate has been a big storehouse for cash. Investment in the sector usually needs a large chunk of money at one go. A lot of investors accumulate cash for a few years and then invest in real estate. This means idling time for money. If the returns on real estate are discounted for that time, the final return reduces substantially.

A lot of dealing in cash always has the risk of theft and pilferage. Businesses that run in cash rely upon people to do collection and disbursal. This leaves a lot of room for unscrupulous elements for larceny. An element of bribery can also be found often in order to keep the lawmaker at bay.

People who earn a huge amount of money in cash and do not disclose this income in their tax returns, represent the dark underbelly of the Indian economy. In spite of strict government actions to curb black money, significant push in digital transactions and financial inclusion programs such as the Jan Dhan Yojana, a large section of the Indian populace continues to remain outside the formal economy.

“There are two sets of people who deal extensively in cash. The first set being the weaker and marginal section of the society who are daily wage earners, agricultural labourers or people working in menial jobs. Their disposable income can barely keep up with the expenses and whatever little is left, they save it in the form of cash and as such they do not incur opportunity costs in terms of missed opportunities for wealth multiplication,” says Rahul Agarwal, Director, Wealth Discovery, adding, “The second set of people is the unscrupulous lot; this set can comprise corrupt bureaucrats, government servants, politicians, businessmen and doctors who generate cash either through bribes or through under-reporting of business income. These are extremely smart people and are well aware of the tricks to hide undisclosed income, make it legitimate through a complex maze of shell companies and thus multiply their wealth.” 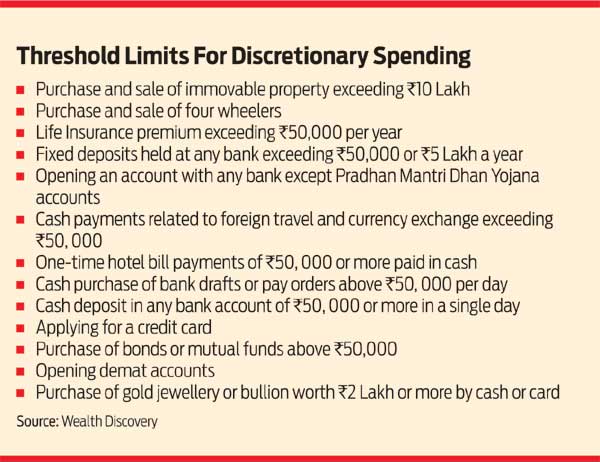 However, the question arises, can these people invest in mainstream? Maheshwari says it is very difficult to move cash into mainstream financial assets. Revised government norms are making it increasingly difficult for common man to invest in cash.

Those who earn in cash refrain from investing in formal avenues, as their chances of getting caught up in the tax net are higher.

However, Agarwal says that not all income generated in cash is illegitimate. There are instances where small amounts of money is made legitimately in cash and there are some avenues where this money can be invested. Physical gold, up to a value of Rs2 Lakh can be bought in cash and for purchases over Rs2 Lakh a PAN number has to be provided. Investment in mutual funds either through lump sum method or through SIP cannot be made in cash as the investor has to complete her Know Your Customer formalities and pay the amount through a  bank account.

Investment in the Public Provident Fund (PPF) account, however, is the only option at present where a person can invest through both cash or cheque up to a value of Rs1.5 Lakh. 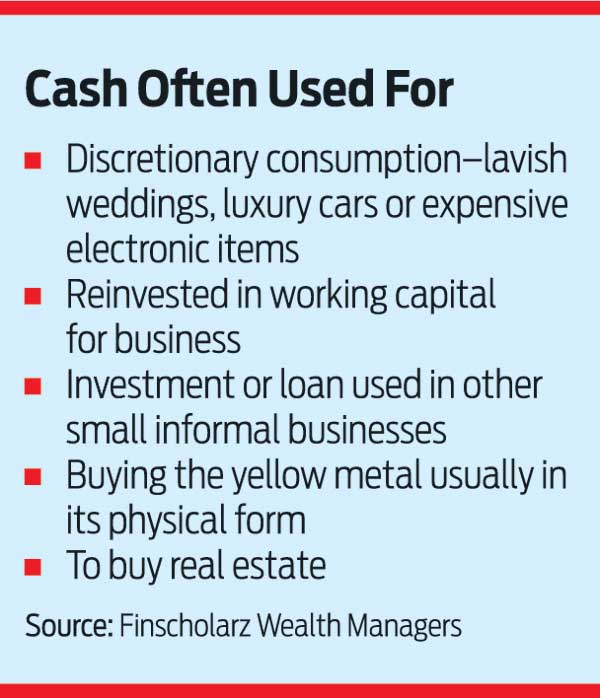 In addition, similar deposits of the same amount can be made into the PPF account of each family member including minors. It should, however, be kept in mind that though, investment using cash is only the first step, individuals should be prepared to explain these cash investments and their source of funds, if their case comes  up for scrutiny with the Income  Tax department.

On the other hand, there are genuine people who are forced to earn in cash, like senior citizens working as consultants for various companies. They also, most often end up with a lot of cash without any proper channel to invest it.

Any income that is not disclosed or properly accounted for is illegal and can attract penalties including imprisonment in certain cases, depending upon the quantum of  the money.

Senior citizens who accept remunerations in cash, should disclose it and pay taxes as per their tax slab. It is especially advisable to them that at this age, it is not worth getting into any such illegal act, which can eventually cost them significantly in terms of peace of mind and legal hassles, says Agarwal.

“Wealth can double in a little more than five years if invested in equity in spite of paying taxes at all stages. The same will take more than 10 years to double in physical assets, in spite of evading taxes. The added benefit is that of peaceful sleep at night without encountering lawmakers. Cost of running businesses in cash or accumulating money in cash to evade taxes is too high and ultimately hurts the wealth creation process in long term,” further says Maheshwari.

Thus, the analysis reveals that earning too much in cash is counter-productive. In fact, instead of multiplying money, it often ends  up attracting the eyeballs of  the taxmen.