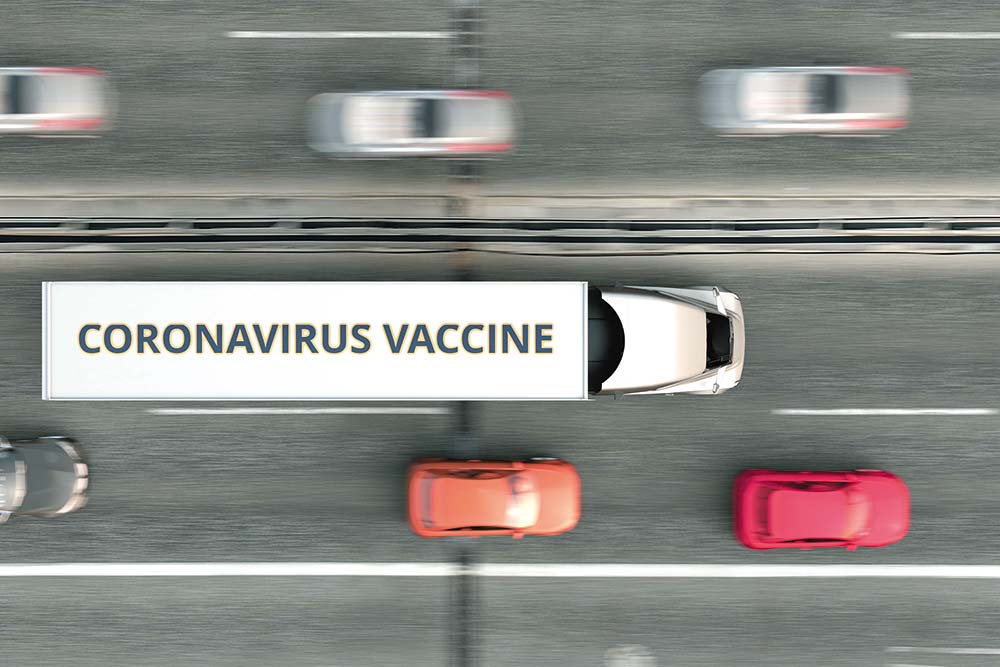 Akshay Sakaria, a chartered accountant, has high hopes of buying listed stocks in the logistics sector, as he believes they will gain traction with COVID-19 vaccination rollout. Recently, these shares witnessed massive gains. An analysis of 11 key stocks shows their market prices zoomed from 45 per cent (Container Corporation Of India) to 125 per cent (Snowman Logistics) between their lowest points this year in March-April and December 18.

Medical experts indicate that a significant percentage of Indians—estimates indicate 300 million or more than a fifth of the population—will need to be vaccinated. Each person may have to get it done several times in a year based on the drug’s efficacy. Logistics firms in transportation, cold storage, warehousing, and related activities will benefit. Many have started to gear up for the massive operation in anticipation of higher revenues and profits. 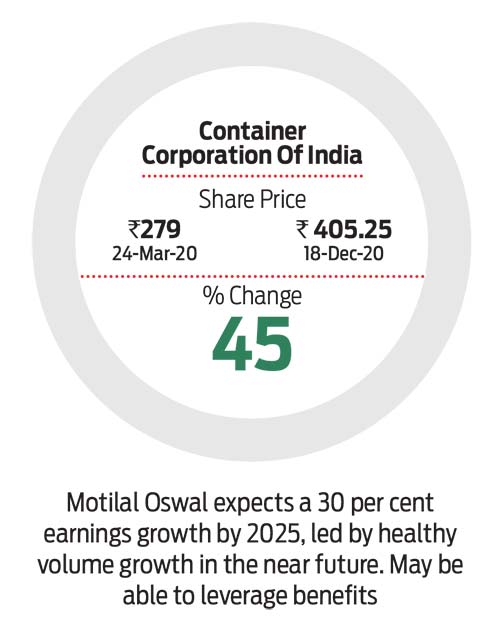 A few of them are focussed on storing the vaccines, which may require low temperatures and minimal fluctuations for limited periods. Vaccines are highly temperature-sensitive and can lose potency. For example, Snowman Logistics is investing in two new temperature-controlled warehousing facilities. It runs 31 such centres across 15 locations, with a combined capacity of 108,375 pellets.

Mahindra Logistics hopes to create a massive last-mile delivery roadmap to cater to its pharmaceutical clients across India. Snowman Logistics is also in the same game, as it has a fleet of about 300 refrigerated trucks. Others like Blue Dart Express plans to ramp up its overall infrastructure.Blue Dart is expected to offer supply-chain solutions for the life sciences and clinical trials sector, and reefer vehicles to ensure seamless transport of shipments. 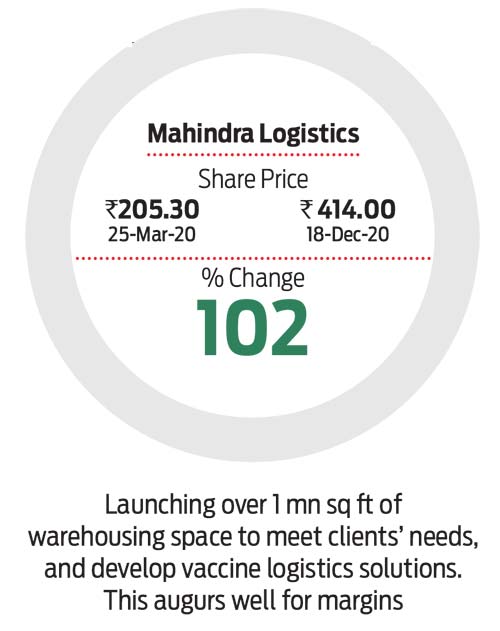 “Several listed firms can benefit if and when a vaccine is approved, but it will depend on their infrastructure capabilities and existing capacities,” explains Nirali Shah, Senior Research Analyst, Samco Securities. Experts contend that the supplies to millions cannot be handled by a few players, and will require the involvement of a larger set. The government will be in a hurry to make the vaccine to reach the desired population.

However, it will not be a one-way journey to profitability for the logistics companies. Political, economic, and company-specific factors will play an important role. The expected boom may be tempered, and impact different firms in varying manners. Some may gain, some may not. Even the former may not benefit as much as they think they will. Investors shouldn’t jump on the vaccination train because some of the wagons can get derailed. The chances of stock shocks are high. 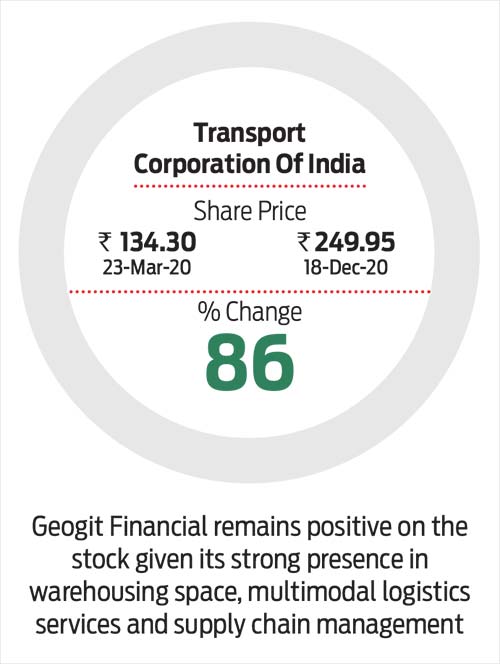 First, the governments have to choose between different vaccines. According to Anand Rathi Shares & Stock Brokers, there are more than 250 potential vaccines in various stages of development. One isn’t sure which one, or which ones, will be officially approved. If the drugs are imported, one set of logistics players will be involved. If they are domestic ones, different firms will play a role. Any delay in the vaccination drive can prove to be bad news for the investors.

Besides, there are likely complications related to the actual distribution of requisite volumes and access to rural and remote areas. One isn’t sure about the government’s thinking on the requisite infrastructure. “Finding the critical mass of people to be vaccinated is a challenge. Having identified them, the next one is to approve a vaccine and reach it to the identified people,” explains Deepak Jasani, Head (Retail Research), HDFC Securities. 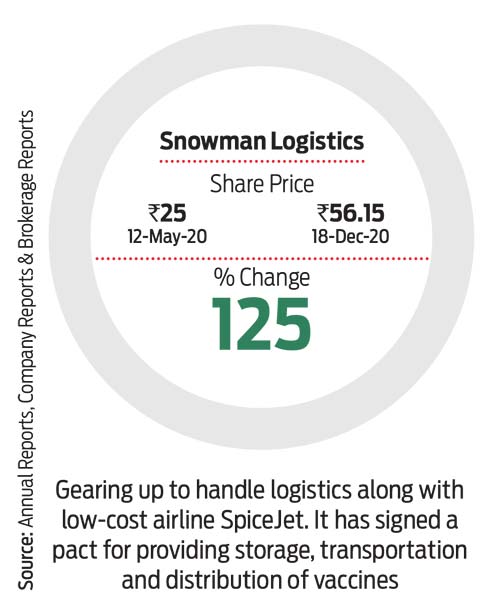 At present, India has 28,000-unit cold chain points to store and distribute vaccines for other diseases. Of these, 750 (3 per cent) are located at the district-and-above levels, and the remaining are below them. The Universal Immunisation Programme (UIP) can reach various medicines to 600 million people annually. If only 300 million need to be involved in the COVID-19 exercise, the governments may not spend much on storage.

Since the states will be involved in the process, the respective regimes will wish to dole out the contracts to select logistics firms, which may be either regional or unlisted ones. Hence, listed companies with a national presence, and without any political clout, may find themselves in cold storage. There is no guarantee that merely because the potential for future business exists, it will be exploited by the listed firms.

Although the government’s budget, as well as money spent privately by individuals, can be high, the share of logistics may not be significant. “A large proportion of the allocations will be spent to procure the vaccine and allied equipment like injections. Of the expenditure on logistics, the main beneficiaries will be the unlisted firms,” explains Jasani. He predicts that only 5-8 per cent of the overall spending by various actors will accrue to listed companies.

One should not forget that in the case of public distribution by the states, the vaccine prices will be deliberately kept low. Even if they are subsidised, most of the money is likely to be earmarked for the vaccine manufacturers. Hence, the margins for the transport and storage players can be limited and restricted. Couple this with the fact that they will need to initially invest huge sums on infrastructure, as is the case with the examples given earlier. 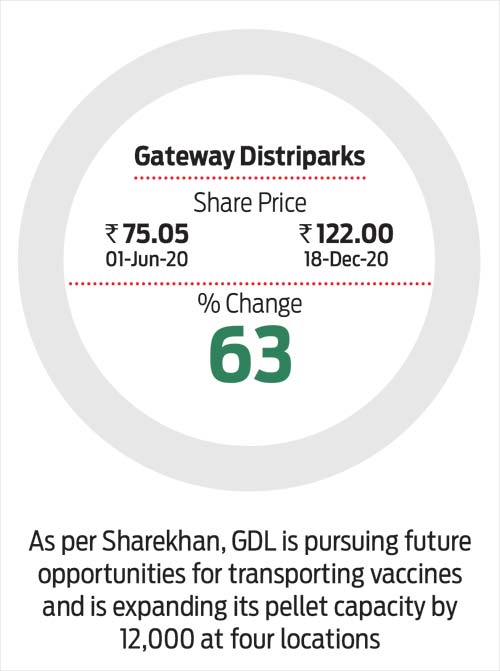 What is more crucial for investors is that the stock markets have accounted for the possible advantages that can accrue to the firms. “We think the market rally on the successful vaccine news has been priced in. And currently, the markets are trying to discount a V-shaped recovery in the economy after the vaccine rollout. At this stage it is fair to remain invested,” says Narendra Solanki, Head (Equity Research), Anand Rathi Shares & Stock Brokers.

But if you haven’t purchased the stocks, and wish to enter at this stage, the upside may not be attractive, and the tide can flow the other way. You must consider the risks before getting sucked by the positive news of vaccines being available in the next few weeks or months. Unlike the story about the pharmaceutical and public health firms, the one about logistics may pan out differently.

Waves of complete and partial lockdowns in the past several months have weakened the financials of logistics firms. Since their health depends on movement—of goods and people—they experienced a great deal of pain and anxiety. So, while their stock prices zoomed in the recent past, their revenues and profits suffered. This is reflected in existing losses and huge debts. In many cases, the red marks began to appear before the COVID-19 crisis.

Soon, these firms will need more capital, it will result in higher debts, and possibly more losses. There is uncertainty whether the managements can cope up with such financial stress for benefits that depend on several imponderables, which include delays and low margins. “It is important to consider if a company is fundamentally sound before investing in a stock. A wrong investment in a sensitive stock can lead to capital loss,” warns Shah.

At the end of the day, the future outlook will depend on demand for goods, and an increase in trade. Unless there is an improvement in the Indian and global economies, it will be saddled with problems. Recent reports contend that recovery is expected in the medium term. In the short term, the vaccine distribution may boost the bottom-line of a few listed firms. This too isn’t a certainty. Investors have to be choosy.