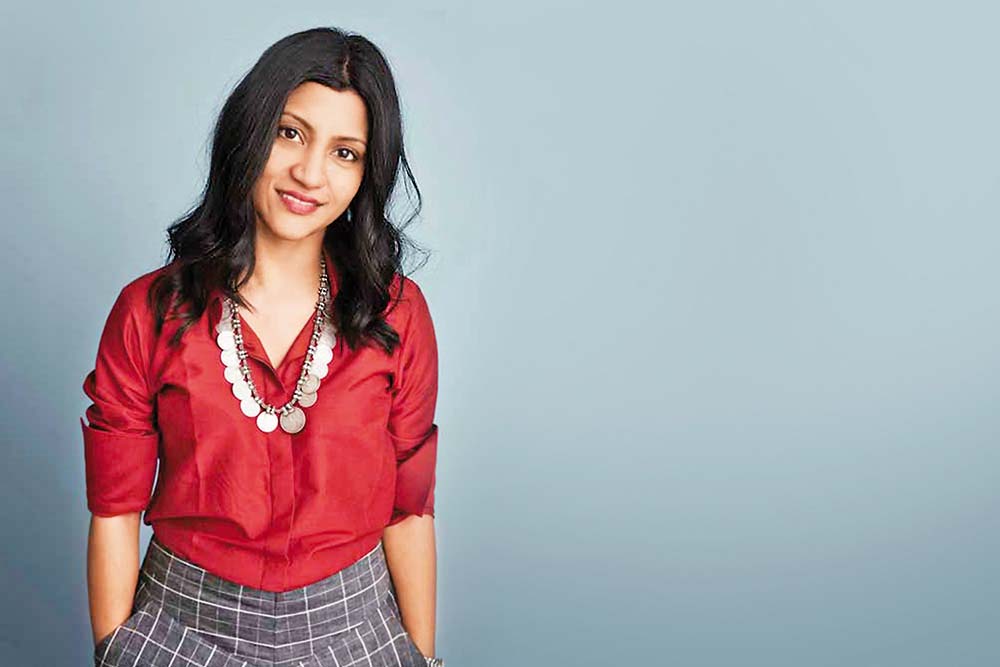 She doesn’t carry any stardom-like tantrums. She is unassumingly humble in interactions. She is very unusual in her words and expressions. She is the girl next door. She is Konkona Sen Sharma.

“I don’t feel like an A-lister Bollywood actor. I don’t even know if I have made it into Bollywood that way,” she says in her quintessentially individualistic demeanour. “I just enjoy my work and I consider myself to be a working actor with a normal life.”

Cinema, or to put it more widely, art and culture, swathed her from the very early childhood. She is grateful to have the privilege of being the daughter of actor-turned-filmmaker Aparna Sen. Her grandfather Chidananda Dasgupta was a film critic, a maker of several documentary and feature films, and a renowned film historian. He co-founded the Calcutta Film Society with Satyajit Ray.

“My mother is a film director, an actor and the editor of a magazine. So, I have actually seen this life since I was a kid. I began going to studios and seeing shoots when I was a child. I have absorbed so much from my family that I feel I come from a huge position of privilege. So, it was very easy for me in many ways. And all of this influenced my upbringing, my taste, my aesthetics, and my understanding of cinema hugely,” says Konkona.

It is perhaps her characteristic simplicity that makes Konkona unique in the film industry. Her down-to-earth attitude in personal life reflects her spontaneity on the screen. “Where to draw the line is a learning from my mother. I simply try to sink into the character I am playing and the rest happens on its own.”

Just the way she draws the line to make her acting realistic, the “working actor with a normal life” differentiates between necessity and luxury when it comes to her finances. “Once I learned to differentiate the two, I figured out how to care for my finances,” says Konkona. “I am a cautious consumer. I spend only on the stuff that I need as long as I can afford it. And, I do not splurge as a principle in life.”

It is perhaps the pandemic that made her more realistic about life. The biggest lesson that the crisis  taught everyone is to be optimal, if not minimalistic, in whatever we consume. “We are a lot more responsible now. We have seen how people struggled to survive in utter financial distress triggered by the unprecedented calamity. We have witnessed how severe an emergency could be. I have never been a careless spender but I’m a lot more careful saver now.”

A normal woman’s plight through an extraordinary situation is what she has played in the recently released Mumbai Diaries 26/11. She plays a character called Chitra Das, a social services director at a government hospital in Mumbai. She is not somebody who is actually a doctor, but has a medical background. She reflects the crisis that the terror strike had triggered among the staff.

Exploring herself is a constant process for Konkona. She pushes the boundary all the time to rediscover herself. From being an actor, she has stepped into her mother’s shoes and became a director. She also turned to writing recently. “I’m enjoying both. But I am essentially an actor and I am focused most on my acting,” she says.

“It’s important for one to know where she belongs. That helps me stay focused on what I am best at. And, that’s what I am doing,” says Konkona.

A Diwali Of New Beginnings