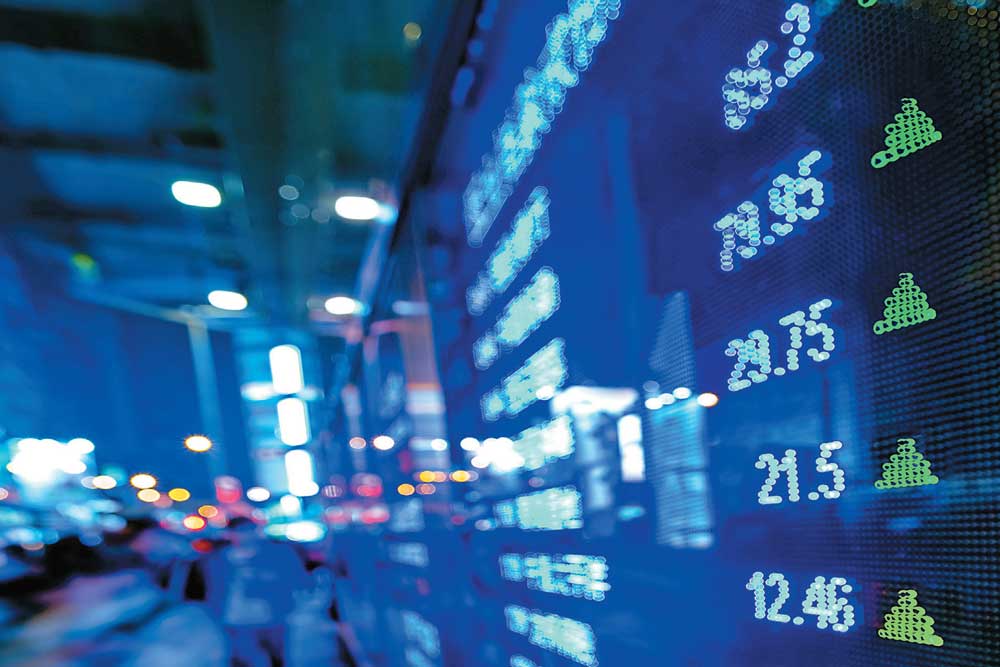 Two months ago, ahead of the announcement of the Union Budget 2019 by Finance Minister Nirmala Sitharaman, Indian equity markets were on a bull run. The day the Budget was announced, Sensex crossed 40,000 points and it was expected to cross its all-time high of 40,267 points in line with expectations which were set when the Narendra Modi government stormed back to power with a thumping majority. But even before Sitharaman had finished her speech, markets had already reversed their trend and entered a bearish phase, which continues ever since. Despite a mild recovery, the Sensex was down almost 3,000 points (almost 7.5 per cent) in mid-August -- compared to July 5 level when Budget was announced -- while Nifty was down almost 1,000 points (over 7.5 per cent). This prompted to government late in August to announce a series of measures to restore market confidence including withdrawal of enhanced surcharge on FPIs and on domestic investors investing in equity markets. The slide in the market has been due to several factors playing out at the same time with Budget not having any major stimulus package to lift slumping economy acting as one of the triggers.

Following the Budget, announcement of increased surcharge on those earning above Rs2 crore, foreign investors went on a selling spree, pulling out around Rs12,419 crore from Indian equities market in July, and Rs12,105 crore in August (till August 23) till the government rolled back the surcharge on FPIs. It remains to be seen how much of that trend is reversed after the rollback.

Sharing his views on the market dynamics, Amit Gupta, Co-Founder and CEO, TradingBells, said, the current fall is majorly due to the impulsive decisions taken in the Union Budget. “The decisions of surcharge on FPIs, tax on share buyback and norms to reduce promoter holding in the Union Budget were the beginning of the turmoil in the Indian stock markets. The Indian economy was already struggling due to the NBFC crisis, liquidity issues and economic slowdown, and these recent impulsive decisions by the government dampened the investment sentiments further,” he said.

Gupta further added that the RBI did not excite the markets either by cutting the interest rates by just 35 basis points (bps) in August where some analysts on the street were expecting a higher (50 bps) rate cut.

“Add to that, the corporate earnings reported for the quarter ended June-2019 were highly subdued, with the Nifty 50 constituent companies reporting its worst quarterly results in at least three years. FIIs are continuously selling in the Indian equity market as they don’t consider the Indian market attractive enough after higher taxes and consumption slowdown. Markets are in desperate need of some positive sentiments from both global and domestic cues before we can start seeing a major turnaround,” he said.

However, he added that Finance Minister Nirmala Sitharaman’s announcement to withdraw enhanced surcharge was just the kind of measure which was required to boost the economy.

“FIIs have withdrawn more than Rs 16,000 crore in July and more than

Rs10,000 crore (before August 26), and with the stimulus to FPI taxation, we can expect this trend to reverse in the immediate term,” he said.

While Gupta attributeed the major market correction to short-term government policies especially the Budget, Joseph Thomas, Head of Research, Emkay Wealth Management, sids the present state of the market and the negative sentiment was the result of the interplay of several factors including global factors, the expectations of sluggish or slower GDP growth, weak aggregate demand, the persistent indications of a weak rural economy, and the issues relating to certain specific sectors of the economy.

“The global factors have not been helpful but negative to make the situation still more distressful, the tariff war between the US and China and its impact on the global economy, the geo-political situation in the Middle East, Hong Kong and North Korea, and the fears of an almost certain slowdown in the global economy are also affecting the markets. There has been exit by overseas investors and the new tax regime, which came into effect after the Union Budget, which had provisions for higher tax rates for such investors may also have caused some selling. It should also be noted that this comes after a period of consistent momentum in the indexes pre-election as well as post-election, and the earnings season has not been encouraging, to say the least,” he commented. 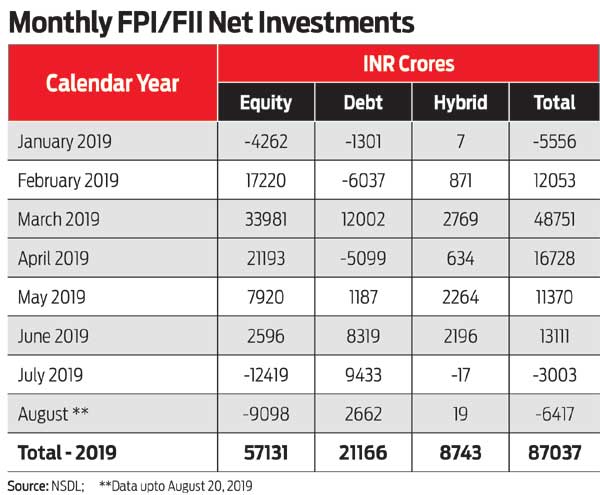 However, Thomas added that while there are many factors at work, many of them are transitory in nature. 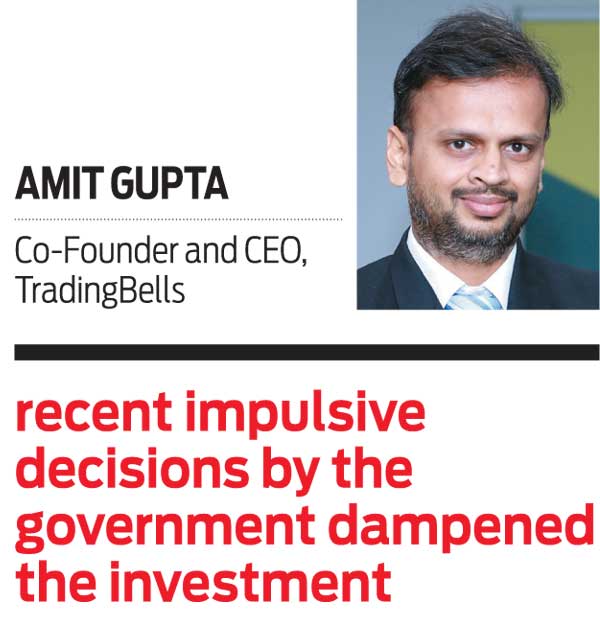 Lovelesh Sharma, Head of Research, Epic Research, opined that the trend was expected to remain for a while as a “V-shape recovery” was not visible when so many factors were taking place at once. He added that global markets are seeing negative yields for most countries now and this is one of the early indications of a slowdown.

“Though how it plays out is whole another story since there is a lag effect to it. We believe that Q3-Q4 may see some improvement since the government spending which was not in place due to elections and budget, while RBI has also squashed the rates continuously. So in the coming few months, all these things should take their effect,” he added.

Then what is the way for investors in such a scenario? Emkay’s Thomas believes that retail investors should stay invested and should continue to invest through systematic investment plans or in a phased manner as that is how they will be able to make gains from equity investing. While there is a tendency to stop investments when markets start falling, he said that this should be avoided, because the benefits of rupee cost averaging are realised only at lower market levels or as the market starts falling.

Epic Research’s Sharma advises investors to stick to quality stocks at this point in time “like you would stick to an elephant when there is chaos in jungle”.

“Catching anything apart from quality stocks would be catching a falling knife. One should see portfolio being overweight on Bluechip-companies with good earnings growth in the past. If an investor is a long term player, then this is one of the opportunities to make sure good companies are being added and can further accumulate in a gradual process,” Sharma further added.

Trading Bells’ Gupta added that with bond yields falling and a series of further rate cuts by the RBI expected, it would be wise to keep some interest-rate sensitive stocks in one’s portfolio.

“Investors must be on the lookout for buying opportunities in good quality names especially those related to the housing theme... Many auto stocks are also available at a reasonable valuation currently. Quality banks will continue to dominate in the financial sector in the coming months,” Gupta commented.

Is Government intervention necessary as a correction method? When asked this question, Thomas felt that the current situation requires intervention or action on both fiscal and monetary front, and measures to support sectors, which are facing enormous problems, like the NBFC sector. Government spending to push up aggregate demand and provision of liquidity and cheaper credit to specific sectors is what is required at the moment. “In short, whatever is required for creating higher aggregate demand should be considered,’ Thomas added. 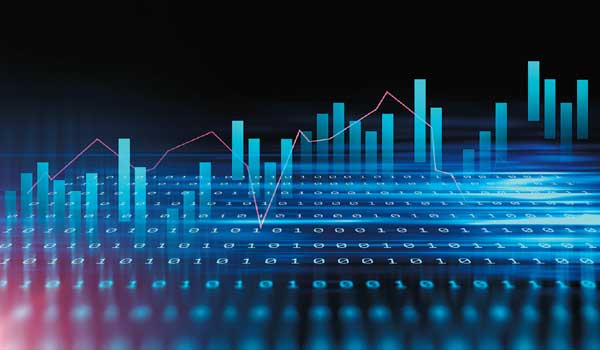 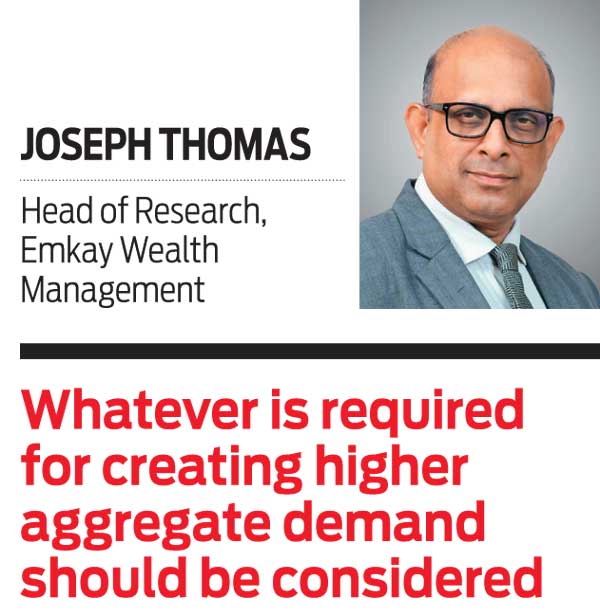 Commenting on the same, Gupta added that the government needs to revisit and clarify its stance on some of the announcements made during the Budget apart from the FPI surcharge rollback. He further elaborated that while there are some positives in the market, they would need stronger signals, both from the domestic as well as international markets, in order to reverse its current bearish trend.

Sharma agrees and opines that there are some moves, which were welcomed like RBI relaxing the rules for stressed assets and the PM- Kisan scheme for farmers, which is yet to have an impact.

“Government relaxing norms on LTCG would definitely be a big boost if done, while at the same time there is need to have effective communication for foreign investors to make sure there is ease in investing in our economy and the message should rather be positive or constructive rather than being complete negative,” Sharma added.

So, what the future holds for the markets? The markets are not concerned with what happened yesterday or what is happening today, but with what is likely to happen in future. According to Thomas, most of the factors at work at present are transitory in nature which leaves room for an uptick in the economy as the right mix of fiscal and monetary policy initiatives are introduced.

“There are a few measures expected from the government in the coming days specifically addressing these issues and this may help the market stabilise before it starts moving up. This is because the inherent capacity of the economy to grow at around the seven per cent level in still intact and measures that would push up aggregate demand will secure growth and well as demand and corporate profitability,” Thomas said with some confirmation.

Now, it remains to be seen how much the measures announced late August by the Finance Minister help the market bounce back.