Housing Sector Crisis and Beyond 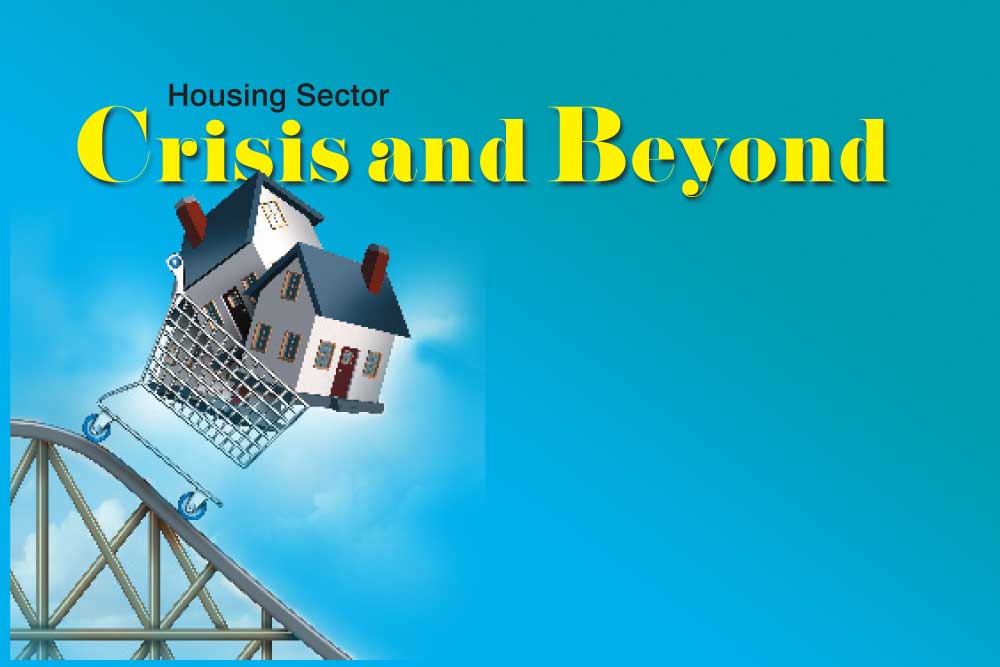 Housing, the sector that brought even the most powerful nation in the world – the United States of America – down to its knees, has been going through a crisis of its own in India. The world is still grappling with the aftershocks of the global recession of 2008, the man-made calamity that was triggered by the massive mismanagement of the booming housing sector in the US. It took years of reform measures and fiscal packages for the US economy to get back on track. Cut to the present, and to the other side of the globe, housing prices stagnated and fell in India, inventory went unsold for years, buyers are still in scarcity and the sector has been facing a liquidity crisis like never before. There are words of reassurance surfacing now with several industry experts pointing towards signs of revival. But with over six lakh units of unsold inventory still piled up in just the top seven cities, can we say the crisis is over?

India’s real estate sector has been in a limbo for a long time. The seeds of the crisis were, perhaps, sown along with the 2008 downturn. The bursting of the housing bubble in the US made investors realise that the exponential growth of housing prices cannot continue indefinitely. This loss in confidence made investors wary of investing in real estate projects, which first led to subdued returns on investment, followed by stagnation and then correction in real estate prices.

With house prices not rising fast enough compared to other investment instruments, and in fact falling over time, investors as well as homebuyers became cautious of buying homes and the crisis just snowballed from there. It got worse when builders could not complete their projects on time. After all, who would want to invest in homes when there is no guarantee that they would get the possession even 10 years after making the investment. This is exactly what happened in India.

Existing buyers moved courts and even came down on the streets protesting against this delay. New buyers shirked away from buying. With no buyers, cash dried up for builders. Lenders became wary of lending and hence the vicious cycle began. Demonetisation did not help the cause, and even important and necessary reforms like GST and RERA made things worse in the short run by causing disruption to the already struggling sector.

However, the government has taken a series of measures to revive the sector and there are some signs of its revival now. Although reducing now, the quantum of unsold inventory is still high and liquidity problems persist. But sales are rising now and the crisis may get over unless there is another major disruption, feel experts. 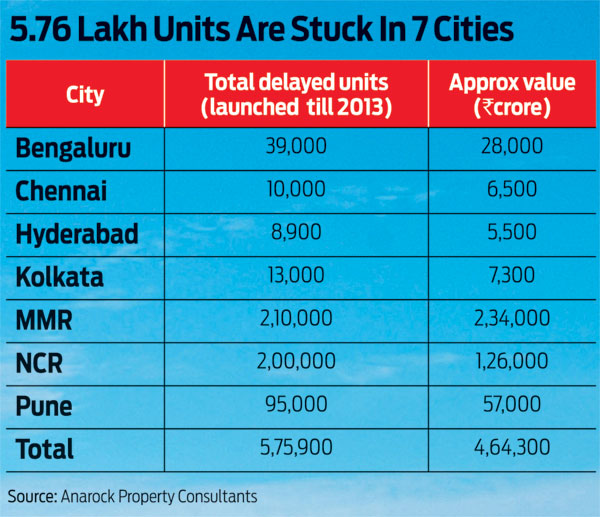 The basis of this revival lies in the huge demand for homes that still exists in India, which was masked by people’s unwillingness to buy considering the falling prices.

Mani Rangarajan, Group COO, Elara technologies, the real estate technology platform that owns PropTiger, Housing and Makaan, explains there is a huge shortage of around 11 million houses in India. To meet this requirement, the government has embarked upon ambitious initiatives like ‘Housing for All by 2022,’ among others.

To achieve the ambitious goal, the government has announced several measures like higher tax deduction for houses up to Rs45lakh, subsidy of up to Rs2.67 lakh under credit-linked subsidy scheme as well as lowering of GST on affordable housing segment. In November, the Union Cabinet also cleared setting up of Realty Alternate Investment Fund (AIF) with an initial corpus of Rs25,000 crore primarily to provide a new lease of life to stalled project. The fund would be sponsored by the government which would provide Rs10,000 crore while the rest would be given by SBI and LIC. 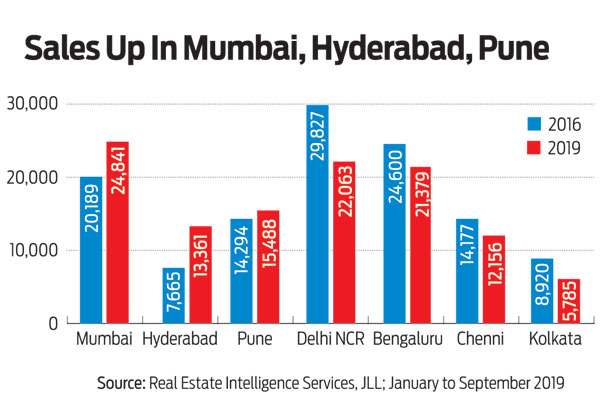 “The impact of these measures are clearly visible, but it still remains a work in progress. However, some more measures like introduction of a single window clearance system and relooking at the stamp duty structure on priority is required to get the sector up and running,” Rangarajan says.

Pankaj Pal, President, Business Development and Strategy, Advance India Project Limited, feels that the ever-growing tribe of Indian middle class moving towards the urban centers of the country is leading to an increase in demand for real estate. The crisis is cyclic.

“The residential sector typically follows a seven to eight year cycle and during the peak season the prices are inflated beyond affordable as these properties are considered by speculating investors and the developers also flood the market. The peak period not only witnesses rise in pricing but also the supply side. This rise also impacts the land prices, license expenses and construction material, which compels developers to further increase property prices,” he says, adding, “The cycle reverses when speculators are not able to flip their units at a profit. During initial stages of reversal, which lasts up to 12 to 18 months, apartments do not get sold or bought as neither the seller, not the buyer is willing to budge. Thereafter, prices start correcting downwards and the period of this downward trend is determined by the quantity of inventory being held by speculators and developers.”

He explains the downtrend has been more evident and elongated this time due to the humongous supply created and also because a lot of developments are not supplemented with proper accessibility.

“Driven by such developments, the market seems to have bottomed out and end-users are returning to buy projects that are completed or are nearing completion. Buyers are still keeping away from projects which are at initial stages of construction as they have grown wary of the developers’ ability to deliver on time given the large number of bankruptcy cases in this sector,” he says. 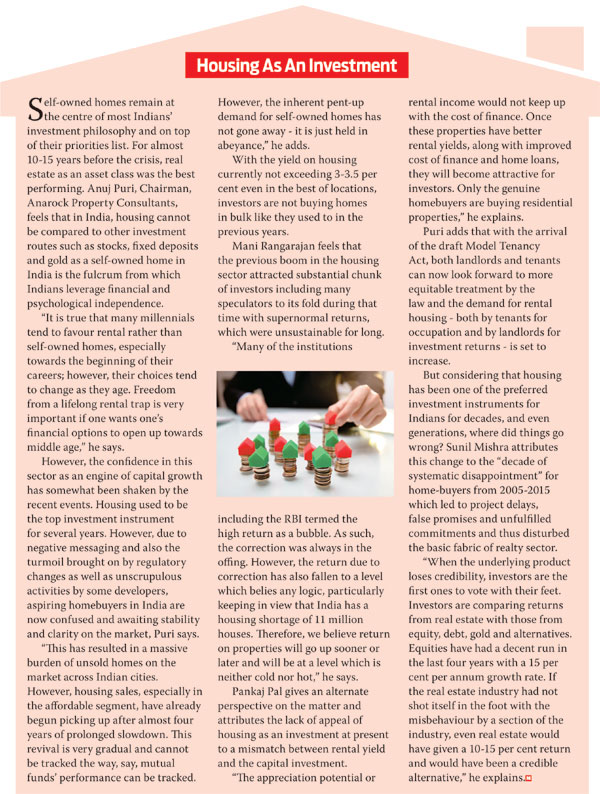 There is no debating the fact that the number of sales of housing units has fallen tremendously from the highs of 2009-2012 and Sunil Mishra, CEO, Trespect, attributes this to the flight of investors from the market. He feels the core demand from end-users has remained at the same level as in the last 10 years. “There is a core demand of 250,000-300,000 homes in the top-eight cities of India. This comes from migrants entering these cities, as well as citizens upgrading, and finally nuclearisation of existing families. There are ups and downs quarter-by-quarter, whenever there is some regulatory intervention like demonetisation, GST, RERA, removal of developer subvention or shake-out of NBFCs. But the core demand reverts to its mean number three-four months after any such intervention,” he said. 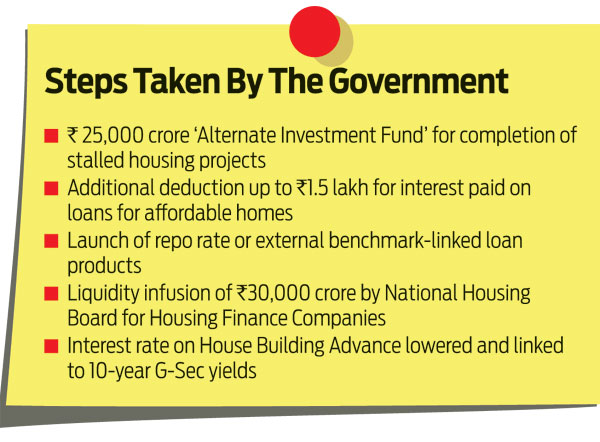 Housing is an important necessity of human existence. The requirement of shelter is so basic that in common jargon in India, it is clubbed together with the basic human needs – roti, kapda aur makaan (food, clothing and shelter), says Avneesh Sood, Director, Eros Group.

“It is no surprise then that housing is a key social demand, and a priority area for administrations, both at the Centre and the states. However, beyond the basic aspect of shelter, housing gradually starts to become a private good, with substantial investment by families and individuals in determining their choice according to their specific customs and needs,” he explains.

While the whole crisis led to losses for almost all stakeholders including the existing buyers who had been waiting for possession of their homes for years, it has ironically opened up opportunities for new prospective buyers as well. The piled up inventory has resulted in ample choices, and hence some bargaining power, for those who intend to buy a house now. Does this mean we now have a buyers’ market of some sorts?

Pankaj Pal concurred and advised genuine home buyers to make the most of it and buy their dream home. “However, investors should only invest if they have five to seven years horizon,” he said.

Choices for buyers have indeed increased with the increase in unsold inventory from a level of 600,000 homes to about 800,000 over the past four to five years. However, giving an alternate perspective, Sunil Mishra explains that three facts on the ground are spoiling this apparent buyers’ dream situation.

“Many of the better apartments in each project have been sold off. Majority of the unsold inventory has not been constructed completely, and the buyers will have to take the project risk while buying the same. Thirdly, in some projects, the developers are fine about holding off sales of remaining flats without getting desperate,” he explains.

According to Mani Rangarajan, while the share of the unsold inventory is high, the number is coming down due to lower number of new launches. “The high number of unsold property means that prices of property have remained stable for the last couple of years and we believe this is the best time of buying a dream home,” he says.

With the growing number of middle class and increased urbanisation, India is a growing market for residential property. Housing is a segment that’s bound to continue growing as people will continue buying houses for reasons ranging from emotional to financial, feels Pankaj Pal.

Nonetheless, housing will continue maintain its cyclic nature, wherein good times will result in higher prices and excessive unsold inventory and this will invariably be followed by period of correction and consolidation. 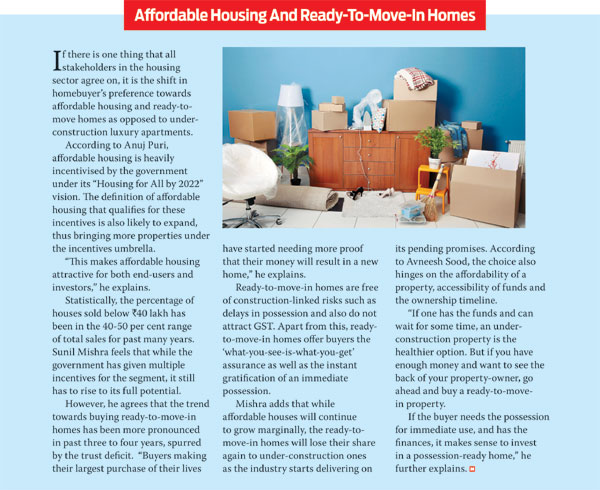 According to Sunil Mishra, the way forward is positive in the medium term, with buyers feeling increasingly more protected under RERA and only serious developers remaining in the fray, and institutional brokers fast becoming buyer-friendly.

“When the dust settles down from the recent NBFC shake-out, core demand will return and will start growing at a secular rate,” he further adds.

At the end of the day, people need homes to live in. There are five million migrants coming into the top eight cities each year. A portion of these can afford to buy homes within one to two years of arrival. In addition, there are intra-city migrants moving to larger apartments in the outskirts of cities for bigger and cheaper homes.

“These are solid sources of demand, which will continue for the next many decades. The developer and intermediary communities have to only deliver, and not do anything special. And the sector will start growing at a GDP++ rate on its own,” Mishra concludes.

What Is The Best Bet - Rent Or Buy A Home?