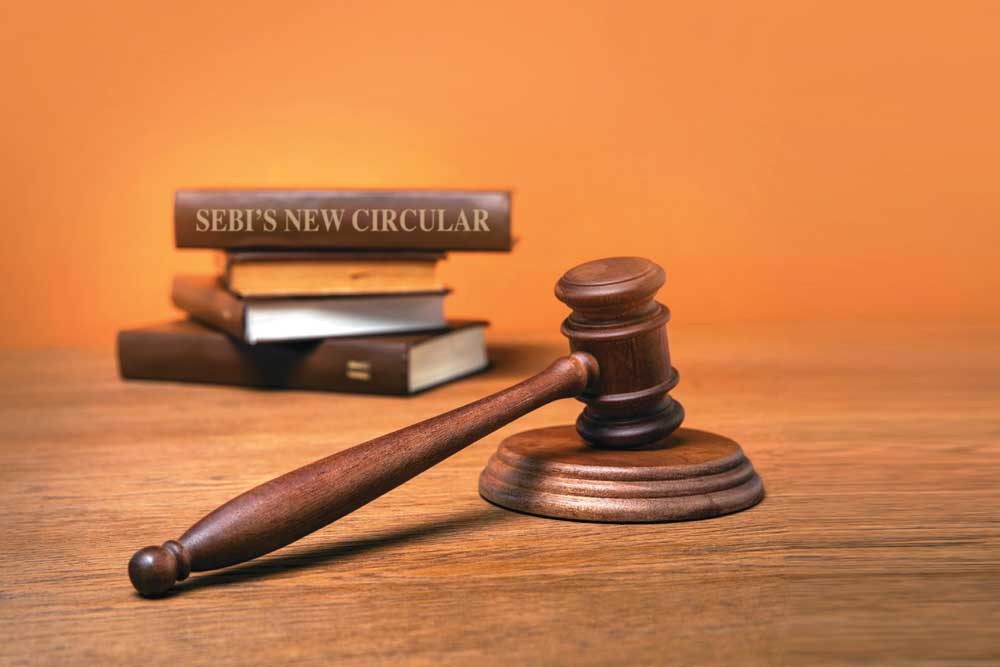 Since the concluding months of the previous year, markets have been experiencing severe patches of crest and trough, which left investors in a lurch. Needless to say, the market regulator, Securities and Exchange Board of India (Sebi), finally had to step in to address the issue. Right from reworking on debt fund categorisation to restructuring norms governing liquid fund as well as holding credit rating agencies accountable, Sebi is on a spree.

After the IL&FS debacle, the market regulator took a slew of regulatory steps, which impacted the debt mutual funds segment substantially. To ensure a more level-playing-field pertaining to valuation of a mutual fund’s investment, Sebi on September 24, 2019, made it clear that any extension in the maturity of the same should be treated  as “default”.

Also, if the maturity date of a money market or debt security is shortened and then subsequently extended, the security shall be treated as “default” for the purpose of valuation. “The new norms address the relative illiquidity disadvantage, which the domestic debt market currently faces and provides a forward-looking valuation rather,” explains Mahendra Jajoo, Head-Fixed Income, Mirae Asset Global Investments. Sebi has also asked fund houses to follow the “waterfall approach” to bring uniformity and consistency in valuation of MFs.

In order to comprehend Sebi’s approach towards market correction, we need to understand a little bit about market functionalities. Within the fixed-income market, liquidity is restricted to a relatively fewer government securities (G-sec) maturities and among bonds, it is restricted largely to AAA and AA+ rated ones. Therefore, valuing fixed income securities is more complex as compared to other traded securities. One of the bigger challenges is the fact that bond markets happen to be largely illiquid; because of which debt funds face a challenge when it comes to valuing underlying securities.

Further, the same illiquid securities, which are not traded, often also have an unclear pricing mechanism. “The objective of this policy is to set a valuation norm to enable asset management companies (AMCs) to value the investments of their schemes, predominantly to have fair valuation. This policy is to justify both sets of investors, existing as well as new ones,” explains Rajani Tandale, Head of Mutual Funds & TPD, LKP Securities.

Sebi aims to make debt funds more consistent and transparent under the “waterfall approach.” So that during any credit event, all funds can value their securities along similar lines. The waterfall approach is a step-by-step method implemented to arrive at a security level pricing, during the valuation of debt and money market securities. The reason it is named so because it reflects the flow of specified valuation methods to be followed, in that particular sequence.

If a security cannot be valued as per the first method, then one should adopt the next one and so on. In simple terms, the valuer needs to go down the waterfall way. “Different funds value the same paper in different ways. Standardisation of norms usually increases transparency and creates a level playing field. While there may be some net asset value (NAV) adjustments immediately, we don’t think this will have an adverse impact in the long term,” says Roopali Prabhu, Head of Investment Products, Sanctum Wealth Management.

Using this method means all traded securities would be valued on the basis of actual traded yields excluding the impact of outlier trades. (See table “Waterfall approach process”). The approach basically means that the volume weighted average yield for trades in the last hour of trading will be used as the basis for valuation of government securities including treasury bills. “The approach contrasts with the current approach where debt is either valued assuming as if the entire investment is either redeemable on call or based on credit rating agency inputs or even based on the entire day’s trading volumes,” explains Sandip Raichura, CEO Retail, and Distribution, Prabhudas Lilladher. 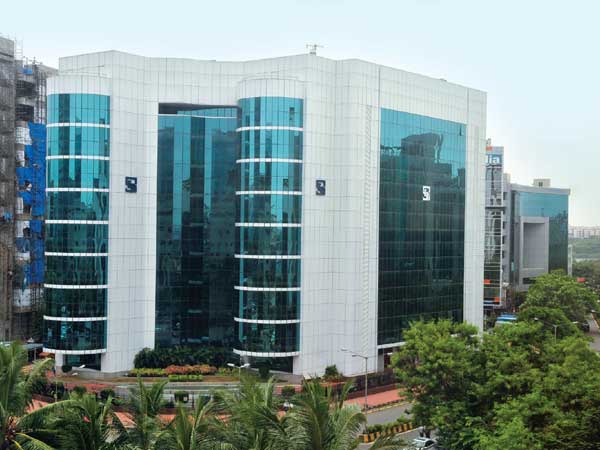 Valuation agencies like CRISIL and ICRA, appointed by Sebi to monitor the new regulation, has a crucial role to play. These agencies will closely follow the documented waterfall approach and arrive at a price of securities closest to the market level. “AMCs will continue to accept the security level valuation prices given by valuation agencies, so we see no difference there. With the revised approach in the valuation of money market and debt securities, investors may be rest assured they are getting correct valuations since the approach is guided by Sebi,” says Mayank Prakash, Fund Manager, Fixed Income, BNP Paribas  Mutual Fund.

However, having said that, mutual fund houses will play only a part in terms of participating in the polling process. This means, during the valuation process these agencies have to nominate mutual funds as well, arrive at valuation-based polling results and implement the same on mutual funds. 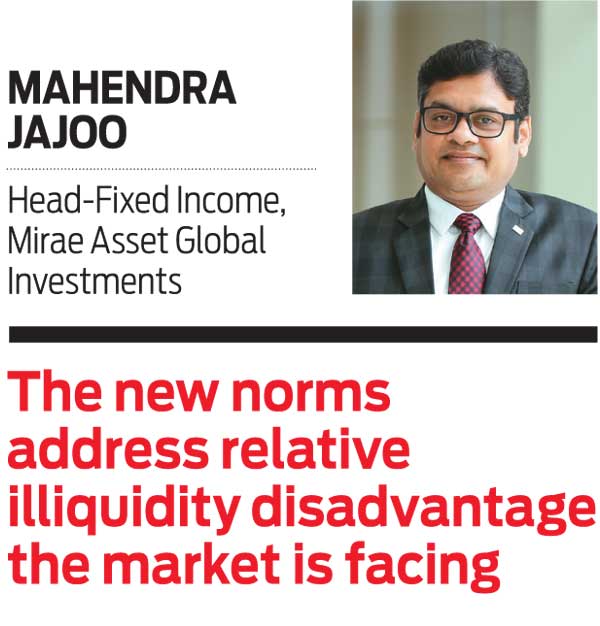 “For securities where there are active quotes in the market without any actual trade, then also the rating agencies may go in for the polling process,” points out Jajoo. The Sebi has already asked Amfi to lay out a comprehensive framework on polling by valuation agencies.

On the other hand, when it comes to inter-scheme transfers (ISTs), Sebi had asked fund houses to seek prices for IST of any money market or debt security from the valuation agencies. For the same, Amfi along with consultation with valuation, agencies have to decide a turn-around-time, within which IST prices should be provided by the agencies. ISTs allow fund houses to move their debt securities to another scheme within the same fund house.

While many fund houses in the past have misused IST, some experts say ISTs are a legitimate way for AMCs to sell papers from one scheme to another. While Sebi requires disclosure on this, not much information is available on such transfers. As a result, there is a fear that this may be used to transfer risky assets from one scheme to another, especially in case of retail-focused schemes.

This area is best umpired by the regulator, to safeguard interest of retail investors. Now with valuation as well as Amfi coming into the picture, such instances are likely to be reduced. “AMCs that are already maintaining clean portfolio and adhering to all norms of Sebi would not impact much, but mutual funds that hold more illiquid assets, may witness accrual returns going down. This may predominantly arise in medium to a long-duration category,” points out Tandale.

Corporate investors, would have to brace up for volatility in returns (especially liquid funds) as the whole portfolio will move from accrual to marked to market by April 2020, according to Sebi. The valuation norms will affect schemes, which invest in the paper where till now, mark to market valuations was done either on accrual basis or on the basis of rating agency feedback and not actual yields in the market. “This will, of course, infuse volatility in debt NAVs as it is a comprehensively different regime. It will especially impact short term and liquid funds where residual maturity of paper will now also be marked to market,” points out Raichura.

Several experts have raised concerns that corporates not meeting certain criteria would not feature in the domain of  fund houses. Within the domain, investment limits and caps could be both positive and negative, argue experts. For example, what happened with a few fund houses recently, when Essel Group deferred payment of certain schemes and these fund houses, in turn, failed to repay investors. However, the fund houses later came to an agreement with the organisation’s promoters to extend time till September 30, 2019. According to media reports, Essel Group had agreed to the clause. 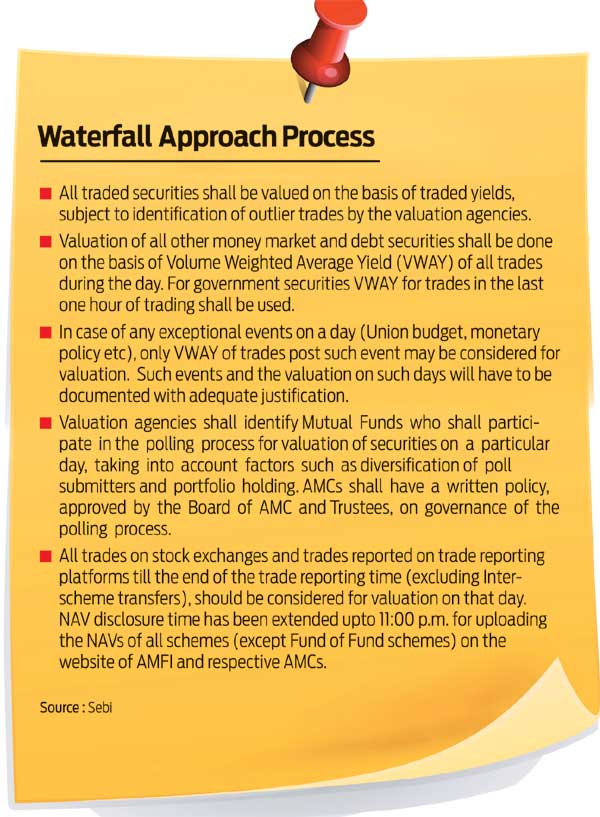 “MFs must look for more diversification; then more corporates would come under consideration. At the same time, it indirectly restricts the ability of MFs to consider incremental investments into certain instruments,” says Sriram BKR, Product Head, Distribution, Geojit Financial Services.

So, does this make debt funds free of risk?

“While these measures are likely to strengthen the process, bring in more uniformity in approaching events, it doesn’t make debt funds risk-free though. One should keep that in mind while taking an investment call,” says Sriram.

Also, a glitch lay with the rollover or evergreening of debt by some issuers in connivance with some lenders along with rating agencies being lackadaisical in conducting due diligence. Further, liquidity has resulted in a lot of businesses getting impacted in terms of working capital and turnover.

Sebi’s continued effort to remove the ambiguities in debt mutual fund valuation, especially with respect to credit funds would provide the required fillip for the markets. However, as risk events are ever-evolving, AMCs are also expected to exhibit substantial maturity over a period of time.

Life Begins Beyond Your Comfort Zone