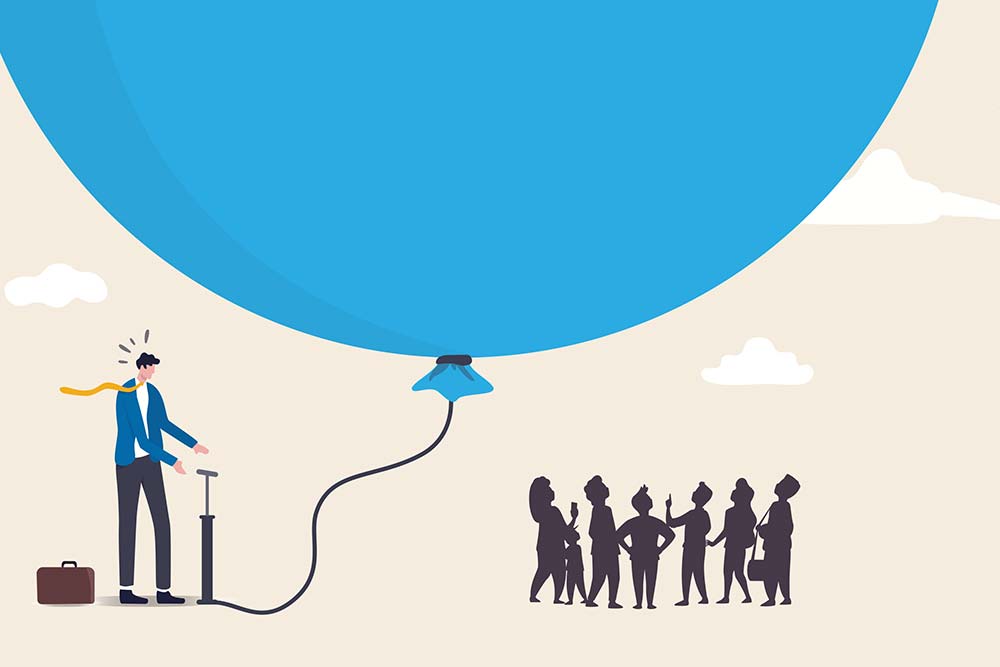 “Inflation is as violent as a mugger, as frightening as an armed robber, and as deadly as a hit man.”

That was the late US President Ronald Regan. Reganomics, which defined his policy of drastic tax cuts to fuel economic growth, was a success back in the eighties. But the woes of inflation remained as much a scare even today and forever.

Inflation, simply put, is the decline of purchasing power of a given currency over time. Of all that helps fight an ailing economy, equity markets are considered widely by pundits as a potent tool to beat the hydra-headed monster called inflation.

“Inflation now tops the list of worries for an individual, who scrambles for options to generate inflation-beating returns,” says Nirali Shah, Head of Equity Research at Samco Securities, referring to the common man’s plight with his money.

The history of financial markets tells us that stocks outperform all other asset classes in the long run. In India, the S&P BSE Sensex has multiplied by more than 520 times during the last 42 years – from 100 points in 1979 to above 52,000 points now – giving an annualised return of around 15 per cent.

“If you see household expenses over the last 30 years, they have grown by 10 per cent per annum, while in a similar time frame, equity (as an asset class) has given nearly 15 per cent returns per annum. Hence, equity is one of the best options that can help you beat inflation over the long term,” says Harshad Chetanwala, Co-Founder of MyWealthGrowth.com.

Although there are other investment options and, some are safer than equities in varying degrees, those are not potent enough to combat inflation. Traditional instruments like fixed deposits and public provident funds offer fixed returns, but they cannot beat the inflation rates. Equity, on the other hand, has volatile returns but it has the potential to beat inflation and earn positive real returns in the long run. In the last 10 years, Nifty has delivered a return averaging 11 per cent annually, while the average inflation rate in the same period was around 6-7 per cent.

“With interest rates on fixed-income securities falling consistently, there is an increasing dependence on equities as an investment avenue,” says Vijay L Bhambwani, Head of Research-Behavioural Technical Analysis at Equitymaster. The long period average (LPA) record of equities as a hedge against inflation is robust and should sustain going forward.

It’s not so simple, though, because most investors do not either carry out adequate homework or lack the expertise to invest in the markets themselves. Not all stocks in the market offer inflation-beating returns. And, one needs to study which wealth creators generate persistent growth in earnings per share (EPS) to beat the benchmark.

BSE has 4,740 companies listed as of early July. Excluding those suspended from listing, there  are more than 3,900 companies. That is obviously a huge ocean to compute. And remember, we talked about benchmark indices (Sensex and Nifty) which narrow down the stream.  “Usually, higher inflation is looked as negative for stocks because it increases input prices and borrowing costs (of funds) which in turn reduce the business’s profitability as most of the times these increase in costs cannot be passed on to the customers in full due to market competitiveness,” says Sandeep Matta, Founder of TRADEIT Investment Advisor. Growth stocks usually suffer more in a high inflationary economy as their profits are affected as opposed to value stocks where the profitability is relatively stable every year.

So, considerable amount of cherry-picking needs to be done to beat inflation. “For individual investors, investing in Index ETFs is an excellent option,” says Bhambwani. ETFs are Exchange Traded Funds, or a sort of security that tracks an index, a sector, a commodity, or other assets, but which can be purchased or sold on a stock exchange the same as a regular stock.

The reason being Index ETFs are managed passively where reshuffling of investments is not done often. This leads to significantly lower fund management fees. The investors’ take-home profits are higher over a three-to-five-year time frame.

“Having a blend of both active and index funds in the portfolio can work better for investors,” says Chetanwala. The allocation in passively managed index funds can be high for the first-time or low-risk-profile investors. Those with moderate-to-high risk profile may have around 15-20 per cent allocation in index funds and the rest can be in large-cap, mid-cap and flexicap funds. “Investors who have higher risk-taking ability can invest 10-15 per cent in mid-cap funds as well,” he says.

An active investor should evaluate the possibility of exiting high debt sectors once the interest rates, besides inflation, start rising. It is, however, a crime for a passive investor to try and time the market based on such variables. During the period of high inflation, FMCG, jewellery, mining, metals, agriculture, energy, healthcare and oil tend to gain. “Companies with lower debt can also perform well as the impact of an increase in interest rate will have limited impact on them,” says Chetanwala.

Inflation erodes household savings because of the higher prices and this in turn impact sectors like financials, auto, capital goods, and discretionary spending.

“Inflation typically influences equity and debt investments differently,” says Shah. Historically, equities have performed well when inflation is on the higher side. “However, debt investments face trouble at times when inflation falls, especially if the coupons are fixed,” she says. As a thumb rule, investors do tend to reduce their equity exposure in a state of hyperinflation or deflation.

Too much or too little of anything is harmful, everything in life should be in moderation. “But taking decisions entirely on inflationary basis wouldn’t be extremely prudent and investors must also consider the market cycle stage, growth, interest rate and other macro factors before shifting their asset allocation. 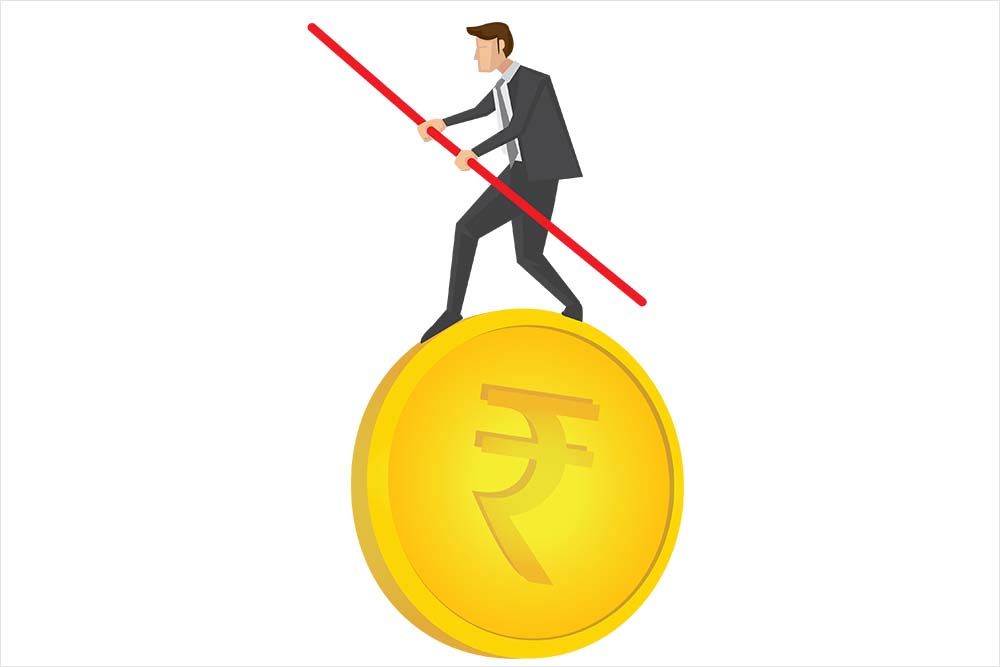 “Mild inflation, say around 4 per cent, is good, as economists say that this has a tonic effect on the economy,” says VK Vijayakumar of Geojit Financial. But when it crosses the central bank’s comfort zone, it is bad.

“Inflation does have a negative connotation for equities,” says Nirali Shah of Samco Securities. That is because higher inflation means higher cost of living and lower purchasing power. Also, when inflation goes up, people tend to earn less in real terms and that results in lower returns net of inflation.

Therefore, don’t rush out to churn your portfolio every time the RBI announces inflation numbers. When inflation shoots past the mandated ceiling of 6 per cent, the portfolio rotation should be towards defensives and low-beta stocks. In India, technology, pharma, healthcare, FMCG and consumer stocks are considered as defensives and during period of high inflation one is advised to buy funds having larger exposure to such defensive sectors.

When inflation goes down to 2 per cent or beyond, investors should shift their allocation towards interest rate sensitive and economy centric stocks which tend to outperform.

The best way to take care of this is to create a proper investment plan that consider inflation at the time of planning. Depending on the time horizon, this plan invests in different avenues that can take care of changes in economy, interest rate and inflation.

Alternatives to Equity as Inflation-Combat Tool

“Investing in precious metals like gold and silver have always been used to hedge inflation,” says Nirali Shah. When equities see signs of trouble, commodities tend to take charge. An allocation towards pure gold and gold traded funds are considered sound hedges against inflation, credit risk, financial risk and also against currency devaluation.

Real estate as an asset class is one of the most favoured after a long hiatus. It can also be considered when a bargain opportunity knocks on the door. Conservative hybrid and balanced mutual funds, gold and real estate (could be subjective sometimes) are other investment options that investors may weigh to generate returns better than inflation.

The author is a Financial Journalist

No Knee-Jerk Move On Bumpy Roads