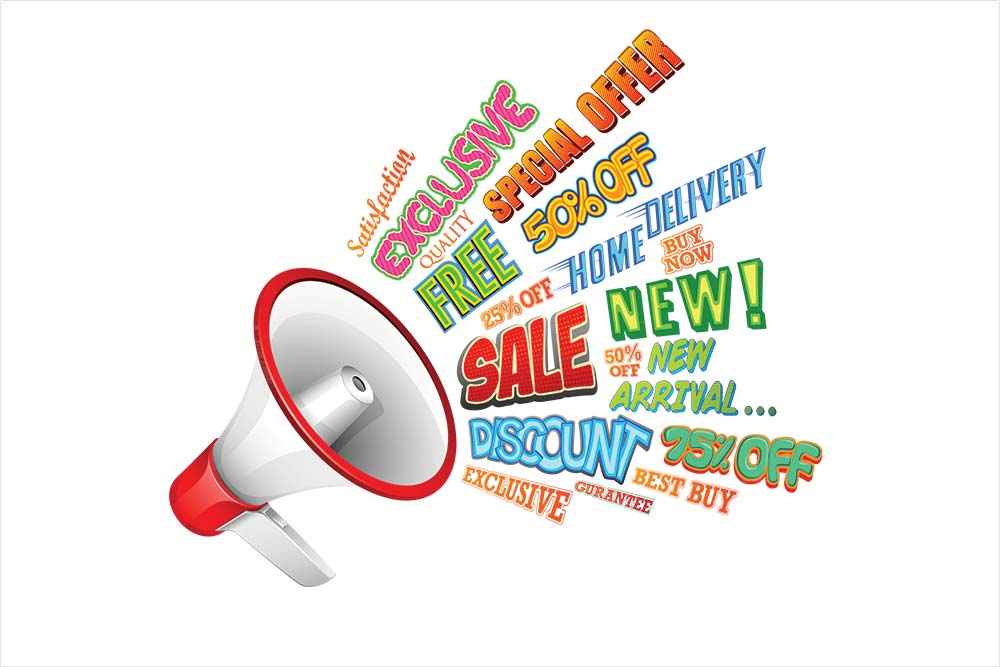 Dheeraj Arora, a bank employee living with his family of six in Kharar, on the outskirts of Chandigarh, has big plans for Dussehra-Diwali. Any bets on what? Well, that’s a no-brainer. He’s planning some binge-shopping, of course, as he eagerly awaits the festive deals—he’d kept off some home purchases for too long.

Everyone who tracks consumer behaviour knows this year is unusual. Many Indian households face an acute dilemma about whether to spend or not—the economic havoc brought on by business failures, job losses and salary cuts during Covid season has changed the equations.

But even amidst all the mixed sentiments, many people will be swept up by the rush of adrenaline when the big festivals come around after a long, enforced lull. The consumer’s psychology will likely be in some sync with the macroeconomic yen for a revival. Most probable scenario: shopping deals luring buyers and cheering the markets. One critical difference. An existing pattern will be accentuated: with the virus being airborne, physical shopping itself poses a huge risk. So expect a sharp spike in the preference for online buying.

“The months from March to August have been full of anxiety, uncertainty and sadness. It’s time to lift the spirits,” says Dheeraj. “We are in a mood to spend and pamper ourselves.” Of course, this kind of sentiment presumes a stable salary—only they even have that choice to beat the gloom. The pandemic has been a riches-to-rags story for far too many. And there are also many in between. Those in partially straitened circumstances are the ones in a real dilemma.

Take Kailash Pandey, a lawyer from Noida. Remember, the courts too were suspended during the lockdown, so he’s studying a set of non-legal questions: whether to spend, what to spend on, and how much to spend. “There have been no earnings for months, all our savings have been exhausted. We might go shopping for the kids’ clothes but no consumer durables,” he says. Judicious spending, then, befitting a lawyer.

Ironically, in this layered picture, it’s people from the metros and Tier-I cities who seem to be taking a step back. Market pundits believe it’s Tier-2 and Tier-3 cities—and families like Dheeraj’s—that will bring cheer to the market, manufacturers, retailers and e-sellers.

A recent survey conducted by KPMG India titled ‘Time to open my wallet or not?’ revealed more optimism in Tier-2/3 cities about spending: these could be the next big potential consumption clusters. Pricing and promotions will naturally play a significant role in shaping consumer decisions. The survey highlights of key categories indicate some spending flexibility though: furniture, electronics, appliances and accessories (34 per cent).

Says Harsha Razdan, Partner and Head - Consumer Markets and Internet Business, KPMG India, “The Indian consumer has of late been focused on purchasing essentials, so we anticipate the phase from Dussehra to Christmas will mark a peak shopping period with lots of promotions and discounts being offered across the country.”

Indeed, a huge uptake is expected in indulgent products like kitchen and cleaning appliances, besides of course laptops/iPads/computers, what with online education on the rise. Add robust sales of mobile phones too: an all-in-one product that’s both an end in itself and the means to other ends.

What about the discounts? Retailers and market pundits say these could be in the range of 20-50 per cent. For the auto sector, discounts up to Rs 50,000-80,000 can be expected—throw in other benefits like free accessories and insurance. With consumer durables, expect 15 to 40 per cent discounts, with everyone in the supply chain ready to shave off a bit from profits to ensure inventories are cleared.

One grey area relates to physical retail spaces. Will those crowds throng the gaily-lit markets as usual? Or will the bulk go online? It’s a tricky one. The lockdown knocked the stuffing out of physical retail. The Confederation of All India Traders reckons a business loss of Rs 19 lakh crore in the last five months! Says Praveen Khandelwal, Secretary General, CAIT: “There was a loss of about Rs 5 lakh crore in April and Rs 4.5 lakh crore in May. June, after Unlock-1, saw about Rs 4 lakh crore losses, July-August saw that dipping to Rs 3-2.5 lakh crore each.”

Now, the unlocking may have offered avenues to release the natural human instinct to go out and spend, pent up for so long. And yet, the rising Covid numbers will bring caution to most. Safety protocols, therefore, will be vital.

“The retail industry has started to witness some green shoots, especially in states that are allowing retail to operate with fewer interruptions,” says Kumar Rajagopalan, CEO, Retailers Association of India. “Government support at local levels, with the assurance of no more localised lockdowns, will also help festival sales aspire to normal levels, perhaps just 20 per cent short of last year’s figures. Some segments may even do better.”

According to him, on a year on year (y-o-y) comparison, August saw consumer durables beating back the sluggishness, with sales climbing back from the troughs to -23 per cent—or a quarter below last year’s. Other sectors like food and grocery (-46 per cent), footwear (-47), apparel/clothing (-54), sports goods (-58), and beauty/wellness (-56) stay sluggish.

Analysed region-wise, south India fared slightly better with sales at -46 per cent y-o-y. The rest of India clocked less than half of last year—East (-52 per cent) and West and North (both -54). On the whole, large retailers are performing marginally better than medium and small retailers. 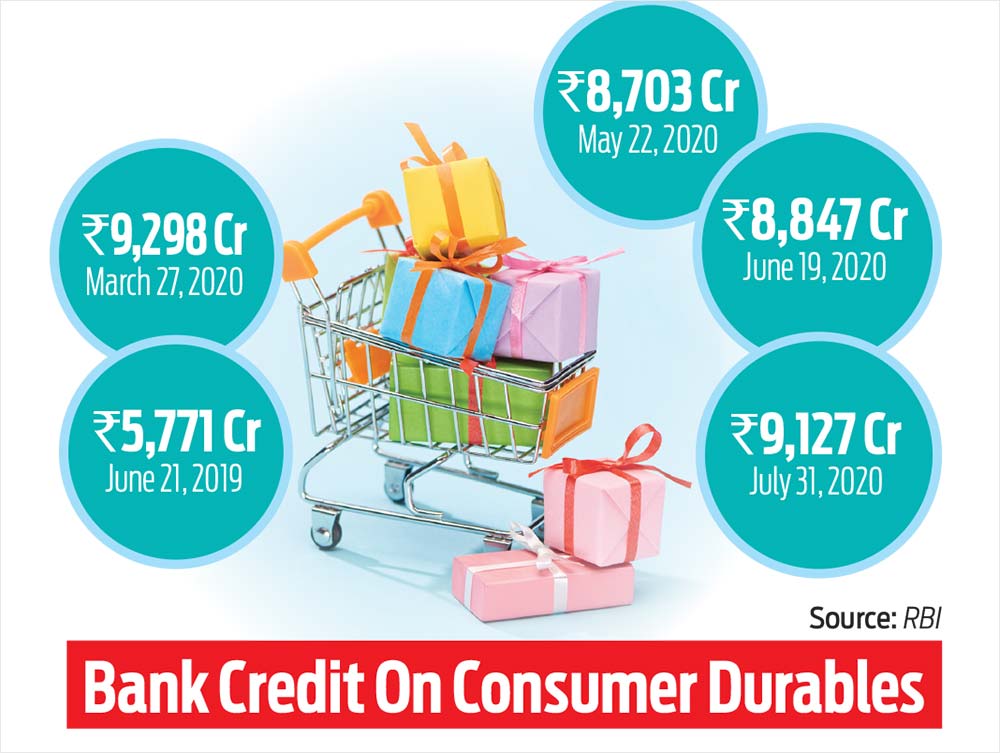 Who Picks Up The Bill?

That’s the other constraint. The retail market is ready with open arms, but will the money flow? Will all channels involved in the flow stay unhindered? Lenders may be willing, but finally it’s consumer willingness that will be crucial. Says a senior Citibank executive, “Finances won’t be a problem. Besides consumer durable loans from banks and credit cards, NBFCs like Bajaj Finserv, whose target is mainly consumer durables, and fintech startups are luring customers. The real challenge is whether the public is ready to take the risk.”

Anuj Kacker, Co-Founder, MoneyTap, is optimistic. “Yes, the economy is affected, but there’s still a steady demand for consumer durables. With easy financing options and a deeply entrenched culture of festive spending, we anticipate an upswing in the numbers,” he says. People have been using MoneyTap for purchase of smartphones, laptops and other items, especially in online festival sales, he says.

While the credit line is their primary offering, they also offer products like credit cards, personal loans, and consumer financing options (like ‘No Cost EMIs’ at e-commerce sites) that come handy in purchasing consumer durables.

India currently has over 450 alternative lending startups that charge 2.5 per cent to 5 per cent interest per month depending on the loan structure and the startup’s revenue model. These startups don’t ask for heavy documentation like banks and NBFCs: identity and residential proof suffices. Repayment is via EMIs or a one-time payment—these online loans are treated just like any other bank/NBFC loan, and the same rules apply for defaults too, with a negative impact on future borrowing. So, in case you are not eligible for bank loans, credit cards or don’t have enough cash, you can enjoy the festivity with a loan from a fintech.

Kacker feels the Indian love for spending during the festive season will outweigh doubts. “We expect more online purchases. With cheap data and the reach of e-commerce in Tier-II and Tier-III cities, there will be a shift to online but people would still need credit,” he adds. Sensing an opportunity, MoneyTap has expanded operations to 40+ new locations pan-India, all based in Tier-2 and Tier-3 cities.

Who else is gearing up for the season? The big e-commerce sites, of course. Says the Amazon India spokesperson, “This festive season, our focus will be on providing reliability to customers, ensuring safety of employees and helping sellers get back on their feet. That means lakhs of sellers, small and medium businesses, artisans, women entrepreneurs, emerging Indian brands and local store owners from programs like Karigar, Saheli, Launchpad and Local Shops.”

Flipkart too is geared up for its annual event, Big Billion Days. The Flipkart spokesperson too speaks of helping “revive businesses and keep the wheels of the economy moving”. Maximising access is the name of the game, so the company has introduced features like regional language interfaces (Hindi, Kannada, Telugu and Tamil) on the app and customer-friendly voice assistants.

Market pundits say this festive season is less about competition, more about getting the blood circulation going again: seller, customer, lender, aggregator…they are all cogs in a wheel that’s beginning to move out of inertia.

Half Celebration During Festivals