Curbing The Crab With Care 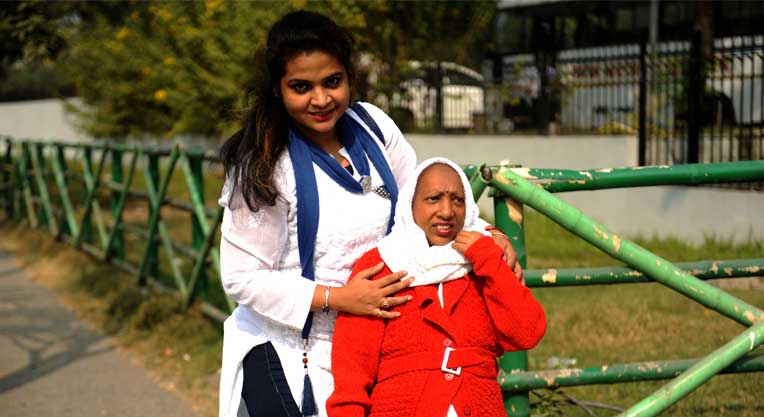 If there is one disease that has plagued the human race for centuries and to an extent, “foxed” clinicians and scientists — it has to be cancer. Despite advances in medical science, the very mention of the C-word can instill fear in the toughest of individuals. But, being paranoid is not the answer. One has to prepare physically, mentally and most importantly financially to fight such a dreaded disease.

Cancer has become a big threat globally. A report by International Agency for Research on Cancer, released in September last year, stated that 18.1 crore new cases were reported and 9.6 crore deaths occurred due to the disease worldwide in 2018 alone.

India is no exception. Apparently, cancer is the second most common disease in India responsible for maximum mortality of about  0.3 million deaths per year.

“In the last decade, oral cancer in men and breast cancer in women have increased manifold, especially in the urban areas. What is striking is, the younger generation is more prone to the disease these days; men and women in their late 20s and early 30s are victims of this ailment,” said Sarita Milan Kothari, senior Gynae-oncologist, practising in RSTC Hospital, Nagpur.

Adding to this, Sudarsan De, Resident Oncologist, Jaypee Hospitals, Noida, said, “Major reasons for an increase in cancer cases include easy access to alcohol and forms of tobacco and excessive stress in the modern world.” Fighting such an ailment still continues to be a challenge owing to the exorbitant expenses involved. It can be emotionally and economically draining for the family. Unfortunately, India still does not have a state-sponsored cancer treatment available; hence it is important that individuals opt for a cancer insurance, especially when diagnosed. While a cancer plan can come to the rescue, not everyone gets lucky.

Bareilly’s Nicholas Lyall met with a tragic end in March 2017, after being diagnosed with cancer in the lymph node. By the time his family could think of opting for a separate cancer insurance (as their usual family health policy did not cover the disease), it was too late. Despite having a health insurance, his family had to shell out money, which ran into several lakh.

However, health insurance that partially covered cancer, helped Kaberi Routh of Kolkata. Born with down syndrome, 44-year-old Routh was diagnosed with stage III breast cancer on May 2018. Since she already had a mediclaim cover of Rs 4 lakh per annum, it helped her sail through the dreadful phase. “While a Fine Needle Aspiration Cytology test cost Rs1.6 lakh, the expenses for the main surgery and subsequent treatments like chemotherapy added up to a few more,” said Saptami Sengupta, Routh’s sister-in-law, who has been single-handedly taking care of the entire process.

Of the total insurance amount, Sengupta has already succeeded in claiming nearly Rs1.4 lakh. As far as the claim is concerned, Sengupta sounded satisfied with the overall procedure and said it was smooth enough. Nonetheless, since Routh is still undergoing chemotherapies, a lot remains to be done. And certain glitches still remain; “like during the chemotherapy sessions, which cost Rs15,000 per session, excluding everything else, the insurance provider only offered to pay the daily hospital bed charges that amounted to Rs1,500 per day. Rest we had to manage from our regular income,” confirmed Sengupta.

Commenting on such circumstances, V Jagannathan, Chairperson and MD, Star Health and Allied Insurance, said, “While we have been the pioneer to introduce such innovative covers and been a catalyst in the market, we provide hospitalisation cover for cancer patients; others provide only cancer benefits.”

Considering a rapid increase in cancer cases, several health insurance providers have come up with specific cancer insurance plans. Recently, Apollo Munich launched iCan—a new cancer care product that offers lifelong coverage and annual renewal even after a claim. The premiums are dependent on the age and whether the person is a smoker or non-smoker. For a 33-year-old non-smoker female, the annual premium will be Rs7,277 for aRs 50 lakh sum assured. Similarly, ICICI Pru Cancer Protect covers a patient from the beginning including a free screening. Living expenses after recovery are also included in the plan.

Needless to say, some individuals have largely benefitted from health covers and mediclaim policies. For example, when Delhi-based Dilpreet Kaur Dua, 34, had to undergo a complete mastectomy followed by a reconstruction surgery after being diagnosed with stage III breast cancer, nearly 90 per cent of the total expenses were covered by her husband’s company and their individual family health policy. 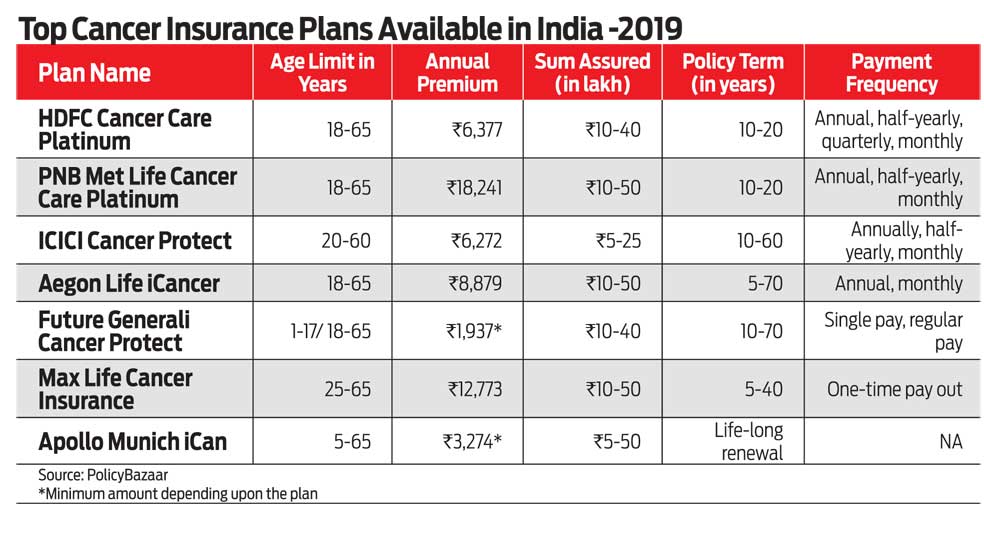 However, can a separate cancer insurance be the solution?

“While a general medical insurance is a must, opting for critical illness that covers cancer is a good idea. Since cancer treatment can be prolonged and expensive, it can drain families of financial resources if there is no insurance cover available. Normal health insurances might not be enough,” said Rakesh Wadhwa, Chief Marketing Officer, Future Generali India Life Insurance. A good cancer insurance policy provides the much-needed financial support during the time of crisis. In fact, certain cancer insurance policies offer the benefit of tax exemption under Section 80D of Income Tax Act, 1961. “The importance of a separate cancer insurance is that there are other significant incidental expenses involved in treatment such as alternative therapy that patient’s family has to deal with. Therefore, one must consider buying a specific cancer insurance plan that provides a lump sum benefit on diagnosis of such an ailment,” added Wadhwa.

However, every cancer insurance plan might not have the appropriate solution. While they promise to insure the patient, the reality is often far-fetched. Some insurance providers often refuse coverage to cancer survivors. Mumbai’s Pramod George faced a tough time when he wanted to opt for a separate cancer insurance. Since he had already undergone treatment and resumed a normal  life, most insurance providers  turned him down. 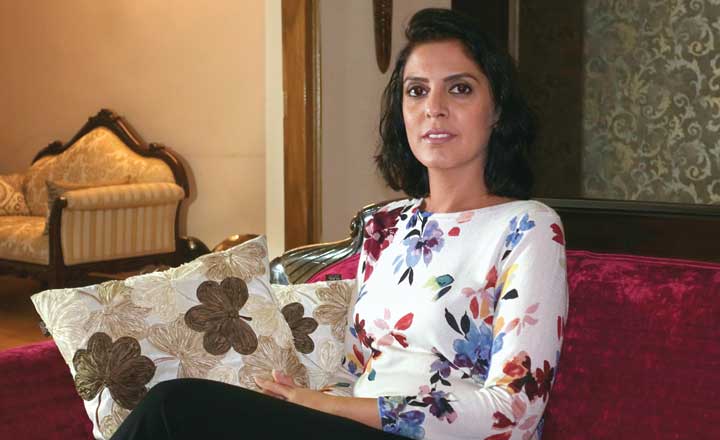 “In India, regrettably, cancer treatment is not state-sponsored. It is sad to see that most health insurances these days are being commercially driven. Companies need to think beyond just making money and provide a more holistic solution. The welfare factor needs to be incorporated  Do not do business with cancer,” said Gautam Mukherjee, practising Oncologist based in Kolkata.

Then, how should one go about choosing a cancer insurance plan?

Few important things need to be considered while opting for a cancer insurance. First, look at the benefits and pay-outs at every stage. Second, see what kind of benefit applies in each stage and the total benefit under the plan. Third, check whether the plan offers a fixed sum insured throughout the term or does the sum insured increase at say 10 per cent every year up to a certain fixed limit. Though the premium could be higher for such a plan, it does take care of the escalating medical costs. Fourth, is there a waiver for all future premiums upon diagnosis? Check at what stage the plan offers it. Fifth, upon diagnosis, will there be a regular income benefit as a fixed percentage of the sum insured?

While one needs to keep in mind, the above things before buying a separate cancer insurance plan, do remember to study the exclusions and restrictions before you take a call. Cancer policies offered by life insurers limit coverage for early-stage cancers to 20–25 per cent of the sum insured. Advanced-stage cancer claims will be entitled to the entire sum assured minus claim paid out, if any, during initial stages. However, some plans also provide a sum assured of 150 per cent in case of advanced stage of the disease.

Do remember to check if any specific cancer or recurrent claims of cancer affecting the same organs are excluded. For instance, Aegon Life’s iCancer does not cover skin cancer. And some of these policies come with long waiting and survival periods. Also, cancer caused by sexually transmitted diseases, are often ruled out from these policies.

Certain features are common to all cancer insurance plans such as pay outs and policy terms. The lump sum pay out at any stage will be reduced to the extent of any pay outs at an earlier stage. For instance, if 100 per cent of the sum insured is allocated in the major stage, then the 25 per cent paid in the early stage will be deducted before the major stage pay out is made, that is, only 75 per cent of the sum insured would get paid at this stage. Also, there is no death benefit but if a patient  dies within the waiting period,  100 per cent of the premium is refunded to the family.

An important feature to consider is to check its maximum term. Most cancer plans have the maturity age fixed at 75. But the maximum term can bring about a big difference in the buying decision. The maximum term for HDFC Life’s plan, for instance, is 20 years, which means that if you buy it at age 30, it will mature at 50. Therefore, while opting for a separate cancer insurance plan, do remember to do due diligence, analyse all the pros an cons and then choose the plan appropriate for you. Understand that there is a difference between critical illness cover and cancer cover. Not all critical illness plans cover cancer, and some that do, not always cover every stages of the disease. As a policyholder, you will have to make a choice on the basis of your health, family history and other factors. Also, do not forget to ensure that you have a basic health policy in place to cover initial hospitalisation charges. As humans, we might not have control over life’s wayward ways. But, we can always prepare ourselves for catastrophe’s like cancer.

Securing The Future From Your 20s