Home »  Magazine »  Could This Be A Stagflation? 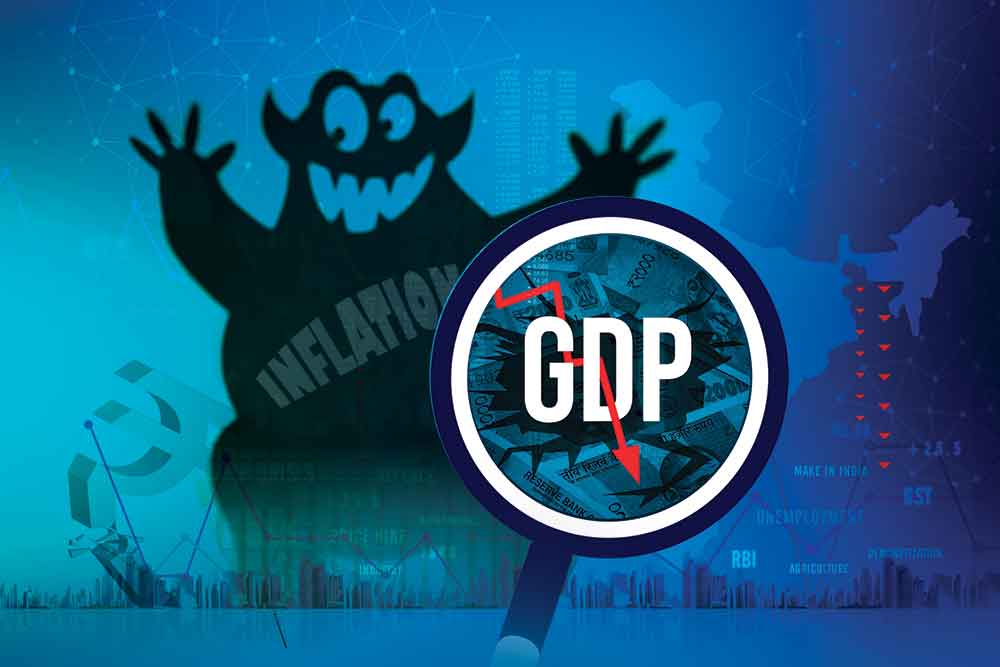 Even if you find macroeconomics daunting and a bit boring, there’s one set of numbers that’s sure to earn your undivided attention every once in a while: retail inflation. This is one such time when that phrase stalks us again, like a seasonal curse—except that it’s much worse this time. The knock-on effect of the health crisis is already all-pervasive: the government is struggling to put the economy back on track and help people retain jobs. No mean challenge, therefore, for it to navigate the complex factors that get consumer prices to soar. And the overall picture is gloomy enough for some experts to toss that other dreaded word into the frame: stagflation.

Why we are talking about it is, the Consumer Price Index (CPI) has been playing well above the Reserve Bank of India’s (RBI) upper margin of 6 per cent. It was marginally better in August, when retail inflation growth eased to 6.69 per cent as against 6.73 per cent for July—a steep climb up from June’s 6.23 per cent—but that’s three straight months of high consumer prices.

What is of special concern here is the widening gap between the Wholesale Price Index (WPI) and CPI, says Pronab Sen, Programme Director for IGC India Programme. “Everybody is focusing on CPI, not on what is happening on the WPI front. The fact is, WPI has been in the negative territory for four months and it’s only in the last month it moved slightly into the positive: 0.6 per cent. The question is, why are retail prices so high when the wholesale prices are so low?” says Sen, a former chief statistician of India.

“The standard check is whether CPI (which has a greater weightage for food items) is going up and WPI is not going up. This time, there are a lot of supply issues. The demand is still down but so is supply. Whether supply has fallen more than demand needs to be studied more closely, as also whether production is also down and what role the lack of normal transport facilities is playing,” says Alok Sheel, RBI Chair Professor, ICRIER.

Retail inflation is generally interpreted to mean excess consumer demand. In the present scenario, this may not apply: it’s not because of consumers demanding too much but because of supplies being too little. And there’s something that is making things costlier for you between the first point of sale (wholesale) and the last point where you buy it. Your first guess—that of there being layers of unscrupulous profiteering in between—may not necessarily be true. It could just be a reflection of supply chain disruption. So, while the product may be available at the wholesale point, companies or traders are simply not able to move it smoothly to the point of retail sale.

Unfortunately, nobody seems to be focusing adequately on the supply chain, experts say. If there’s a supply chain disruption, it may not be a singular point but pervasive up and down the chain. The exact cause of this kind of high retail inflation thus remains a mystery, though there are some clues.

“There is a lot of uncertainty. There is some pick-up in both demand and supply, but unfortunately demand is more than supply due to logistic bottlenecks, which is why we are seeing a rise in inflation. It seems to be across the board but more so in the case of food items (a major component in CPI),” say N R Bhanumurthy, Vice Chancellor of Bengaluru Dr B R Ambedkar School of Economics.

Due to the lockdown, a lot of companies are stuck with large inventories. With the further opening of the economy in September and further easing of logistics bottlenecks (like local lockdowns and curbs on interstate movements), a favourable impact on the overall supply chain should be seen. Movement of labour and employment scenario too are yet to revive. On all these counts, the industry by and large feels let down as the government failed to connect the dots properly and overlooked the need to take into consideration the needs of various sectors. The outcome of the gradual unlocking was therefore not up to expectations of the policymakers. Industry did not benefit adequately without access to markets, raw material, labour or resources.

India has been opening up in a phased manner for three months now but manufacturing and services are still to get back to full operations, says K E Raghunathan, former national president, All India Manufacturers’ Association (AIMO). During June and July, units were only allowed to operate with 30 to 35 per cent staff. Most of the companies spent this time reopening operations, including checking machines, booking orders, planning local deliveries and reassessing inventory. In August, when 60 to 70 per cent workforce was allowed, the units started taking deliveries of raw materials already ordered and executing contracts in hand. “Since September we have been allowed to go anywhere, so with say engineering products, delivery, testing and other service activities are being undertaken. A lot of engineering products that had been manufactured and were pending inspection are now being cleared. The cycle of manufacturing, inspection, delivery, site testing and inspection would hopefully come to an end by the month-end for most units,” says Raghunathan. He voices the apprehension that, unless new orders come by October end, many companies will be forced to lay off more workers due to lack of resources.

Tax filings in November will reveal the true state of affairs in the manufacturing and services sector. But a clearer picture would be revealed only around December 20 when the data would have been analysed.

The RBI in its annual report notes that two scenarios are envisaged: first, where lockdown-I impacted the supply side of the economy by decreasing labour supply and productivity; the second where lockdown-II saw further increases in marginal cost. Inflation is compatible with both scenarios. Plus, firms respond to a squeeze in profits by curtailing production and labour demand further. That means wages see a lower rise and the economy goes through a large contraction.

Overall, an equable state may not be attained unless manufacturing, services and agriculture all look up simultaneously. Currently, there is not much to cheer for farmers: they are faced with low returns with prices of many agri commodities, including wheat, millets, pulses and oil seeds, fetching lower than last year’s prices. Late and higher-than-expected rains in August and September have also led to some crop damage, though fortunately less than last year. The global scenario is as cheerless as the domestic one too. 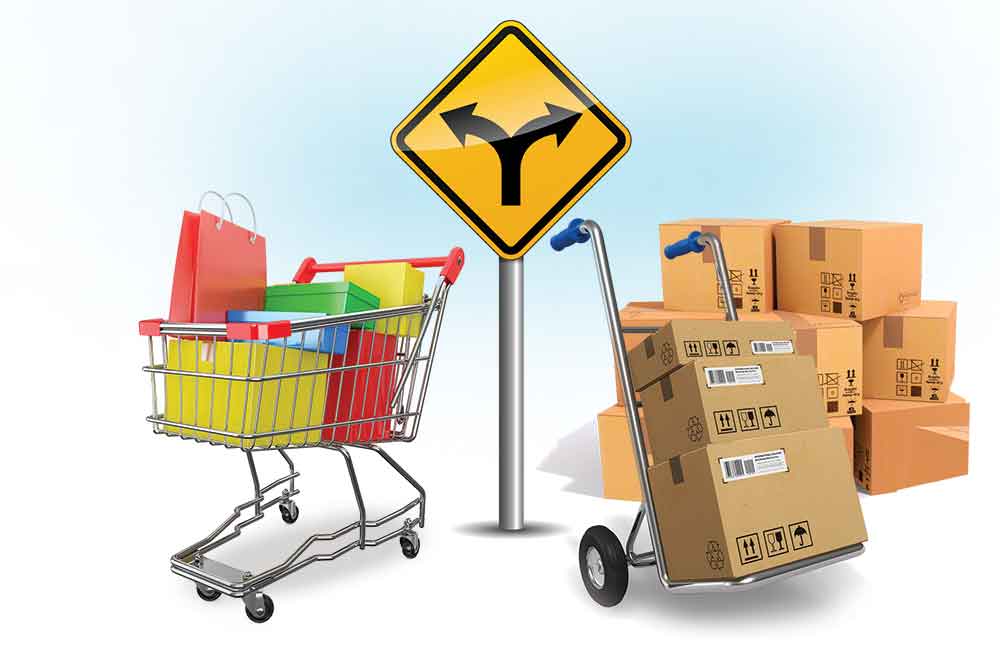 “There are questions on the demand side, questions on the production side and also questions on the transmission side that need to be studied. What is coming into play would have to be looked at by studying the various components of prices that are rising. Global demand is down due to Covid. What is happening in India is worse in scale, but it is more or less following global trends of lower demand and lower than desired commodity prices,” says Sheel. In these circumstances, he adds, it has to be seen whether this is a case of stagflation when demand is low, inflation rate is high, the economic growth rate slows.

Farmers’ distress is very real and it has to be squared with the fact that while retail prices are very high, the producer or farmer is not getting remunerative prices, emphasises Sen. In the absence of hoarding, this cannot happen. This needs probing, particularly if the supplies at wholesale end are in surplus and shortages are only at the last point of sale. In the case of manufacturers, supply disruption could mean raw material not reaching the unit, stalling efforts to keep operations going.

On the other hand, disruptions due to lockdown could also mean traders simply do not have the money to keep purchasing. During the lockdown, most traders and MSMEs have been paying wages and may have now run out of money to even restart businesses. Or may be able to do so only on a smaller scale.

Lower remuneration for farmers should put a downward pressure on food prices. As farmers are also consumers, lower income for them would mean lower consumer demand in rural areas. This could further depress prices of several commodities or lead to lower-than-expected consumption by a huge demographic.

The challenge for India is on another front also: government finances are not looking good. Already, we have crossed 80 per cent of fiscal deficit, points out Bhanumurthly, adding that even in rural development, with over six months to go, we have already used up over 80 per cent of the annual allocations. There’s a jump in most expenditure heads. Credit to MSMEs and agriculture has also gone up under the stimulus package. Overall, disbursement is happening in a big way, whether to the poor or to the agriculture sector. A lot of money is being pumped into the economy, which is helping mitigate low demand. But supply constraints could be spoiling that game. The macroeconomic riddle is such that it needs many hands to solve it. Both policymakers keeping a close vigil on the indices, and administrators on the ground feeding policy with real-time information. All of that will ensure how much you have in your pocket: to spend, to meet the essentials, and to save and invest.