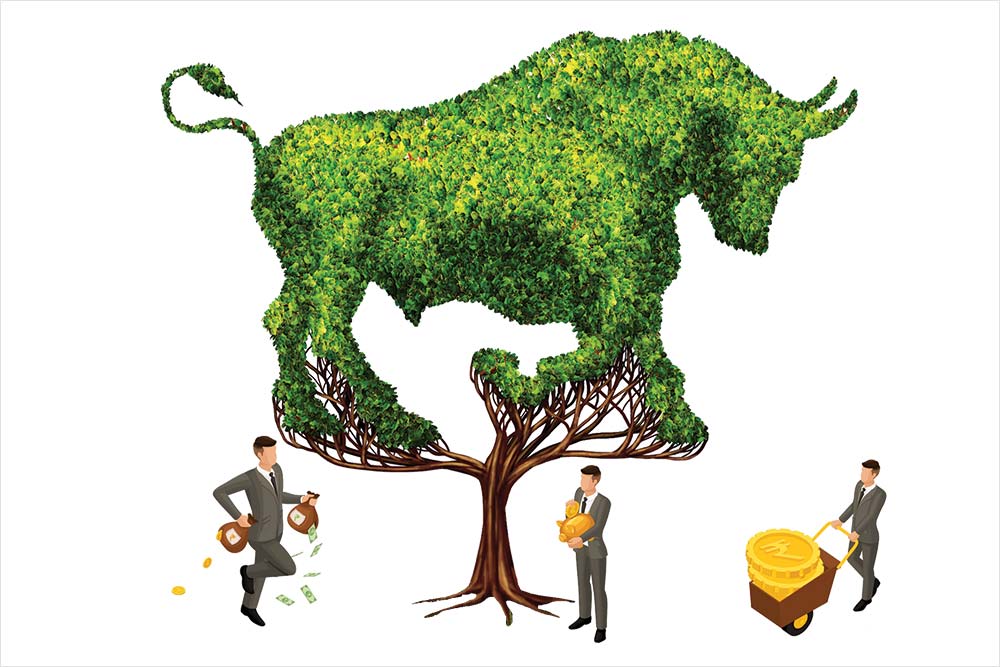 Stock markets are pathologically pragmatic. They see a lot of sun even when dark clouds swirl on the horizon. It is perhaps this inherent positivity that keeps the markets going.

The second Covid wave has phased out and a third wave is feared round the corner, but the markets are looking forward to an impressive earnings growth, despite the mounting uncertainties. The main reason for this market dynamics stems from the fact that investors are rushing inexorably for equities in the absence of high-yielding investment avenues and a low interest rate regime. Stocks are known to beat inflationary pressures.

India VIX, a volatility index based on the Nifty index option prices, has fallen from its highs of 80 in early 2020s to as low as 15. It indicates a receding fear among investors. Similar trend of one-way growth has been seen in the small-cap and mid-cap space since April last year.

More than a year later, investors wonder if the small-cap and mid-cap space is still left with some fire in it.

“These small and mid-cap stocks were pressured for long. There was scanty growth. But the picture has changed now. Cost-cutting measures adopted by these companies during the pandemic pushed their bottomlines up,” points out S Ranganathan, Head of Research at LKP Securities. “Markets are poised to scale new highs. The broader markets will continue to outperform the benchmark Nifty and Sensex.”

Direct exposure to equities increased several times as more and more people began trying their luck in the stock market in search of a parallel income. The need for additional financial assistance precipitated more severely in the aftermath of the Corona-induced lockdowns when job-losses and pay-cuts became normal. This was evident in the spurt of new dematerialisation accounts from smaller cities over the
last 15 months. 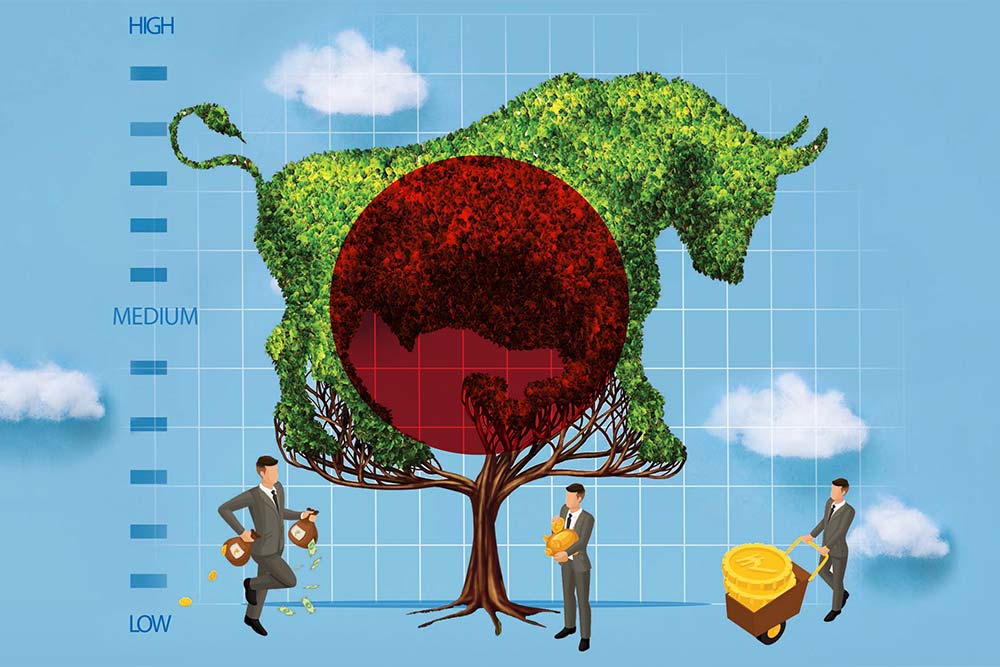 According to data released by markets regulator Securities and Exchange Board of India (Sebi), new demat account additions scaled a record high of 10.7 million between April 2020 and January 2021. This was more than double the 4.7 million new accounts opened in 2020-21.
Most of these new accounts have gone to Central Depository Services (India) Ltd, one of the two depositories promoted by the Bombay Stock Exchange (BSE). The BSE stock zoomed on the back of an increase in income and also because of its hefty stake in CDSL. The other depository, the National Stock Exchange (NSE)-promoted NSDL, has also garnered an increasingly bigger slice of the market pie. It will grow further as NSE gears up to go public with a market capitalisation (M-Cap) of Rs 50,000 crore.

The pipeline of public issues is quite long and strong, which will test the appetite of these new investors. The next two-three quarters will see a deluge of public issues from start-ups backed by private equity players, and central PSUs like LIC of India in the second half of this fiscal.

Mobile wallet company Paytm is planning to float the country’s biggest initial public offering (IPO) of Rs 12,000 crore. The news sent the Paytm share to Rs 35,000 apiece in the grey market. Some more start-ups like Zomato and Pharm Easy also have plans to tap the market.

Nirali Shah, who heads the Equity Research desk at Samco Securities, expressed concerns at the exuberance seen in the IPO market. She said the trend seen in IPOs with record subscriptions and some crossing 100x as liquidity is rampant is a proof of exuberance. In an oblique reference to Paytm’s grey market premium, she said the unlisted space is also witnessing high demand, pushing share prices to exorbitant levels.

Market experts are bullish about the long-term prospects of the benchmark index with some of them hoping to see Sensex breach the 100,000-point level in the next couple of years. Some pundits, however, argue that the index level is just a number that can be managed by excluding non-performers and including performing stocks as its constituents. But most experts predicted that the broader market will continue to outperform the benchmark indices.

The Indian economy went into a state of cost-push inflation after the second wave of the pandemic with commodity prices firming up, leading to a surge in the prices of final products in the markets. Cotton yarn prices, for example, have zoomed and this has resulted in a price hike for products like innerwear. Listed undergarment manufacturers like Rupa Hosiery and Lux Cozi have seen a spurt in their share prices.

The price hike, however, will have a positive impact on the government’s indirect tax revenue through higher income from the Goods and Services Tax (GST). The government’s gross GST revenue reached a record high of Rs 1,41,384 crore in April. “The GST revenues have not only crossed the Rs 1 lakh crore mark successively for the last seven months but have also shown a steady increase. These are clear indicators of sustained economic recovery during this period,” says the government’s Press Information Bureau website.

Amid various sectors turning around in sync with the economic revival, sugar companies, which fall in the mid-to-small-cap category, put up a robust performance in recent months. With the government advancing the deadline for mandatory blending of 20 per cent ethanol with petrol and diesel by five years to 2025, more and more sugar mills in Uttar Pradesh are either ramping up their ethanol production or setting up new plants. This gave sugar stocks ample fuel to surge.

Metal stocks, one of the major market movers in the mid-cap and small-cap space, have attracted the attention of analysts, despite being in the correction mode. “Due to our positive outlook on steel cycle and possibility of further upgrade in FY22 and FY23 numbers, we believe that the stock has more room to rally. We value the stock on the FY23 EV/EBITDA basis, taking normalised EV/EBITDA multiple (5.5-7x). We see a rare combination of growth capex along with deleveraging (once in a decade), which ideally should command premium multiple to historical average,” says a report on metals and mining authored by Ashish Kejriwal and Kunal Kothari of Centrum Institutional Research.

“We recommend to buy steel stocks. We revised earnings of steel companies earlier post their Q4FY21 results. Now, we increase Steel Authority’s FY22/FY23 EBITDA by 43 per cent and 30 per cent respectively, to factor in higher steel prices. Out top picks are Tata Steel, SAIL, JSPL”, the report says.

Tata Mutual Fund too is optimistic about the performance of this space. In its report, Equity Outlook for June 2021, it says: “The headline valuations for Nifty Midcap 100 suggest that we are in an acceptable zone which can act as a platform for the broader markets to do better from hereon. Midcaps in a growing market with market leadership and low leverage can be equally attractive investment option as any large cap.”

In the sectors with post-Covid tailwinds such as pharma, digitisation, ecommerce and electronic manufacturing, large caps and midcaps are adequately represented and, in some cases, even dominated by midcaps, the report says.

“Mid and small cap scrips continued to fare better than their larger peers for the second consecutive month in May and this is evident from the performance of the broader market indicator, CMIE Overall Share Price Index (COSPI), which housed 2,810 actively traded scrips, rose by 7.8 per cent, outperforming the Nifty 50 and the S&P BSE Sensex by 1.3 per cent each in May 2021. It had fared better than the benchmark indices in April 2021 too,” the Tata MF report says.

“We continue to believe in the broader market rally driven by mid-caps and small-caps. The broader market has outperformed the large-cap universe by a significant margin and as a result the Indian market cap hit the milestone of $3-trillion mark in the last week of May. The broader market continues to look attractive at current levels,” says Axis Securities in a report, Axis Top Picks for June 2021, authored by its Chief Investment Officer Naveen Kulkarni and his team.

Mid-caps are trading at a discount to the large-caps and they offer good upside potential. In a catch-up rally with the global market led by the downward trajectory of the Covid-19 curve, the mid and small-caps delivered significantly higher return as against returns by the large-caps.

The earnings trajectory for the mid and small-cap stocks continues to be encouraging with many small-cap companies clocking a 100 per cent growth in earnings, driven by superior operating performance and low-base effect. The low base will continue for another couple of quarters, and hence earnings growth is likely to look high.

The perception of a rise does not, however, rule out volatility in the markets. But investors need to concentrate more on their risk profile while making investment decisions and a balanced approach is a must while assessing risk appetite.

“Not investing in market and sitting on cash is also one kind of risk. We are going through a lot of uncertainties, that does not mean one should shy away from the market. In fact, uncertain time provides a lot of opportunities,” says Mahendra Jajoo, CIO, Fixed Income, Mirae AMC. “We had a very bad situation last year but in January-February 2021, we became complacent and started talking that India will not have a second wave and now you see how ruthless and deadly the second wave proved to be. So, within the span of two months (end of February to end of April) everything changed.”

Jajoo stresses on the need for investors to take into account such uncertainties and the resultant volatility and ensure that their investments can generate reasonable return out of these uncertain circumstances.

The prevalent uncertainty in the Covid-ravaged world has fostered certain practices that are damaging to the market dynamics. Most markets around the world have seen the emergence of “meme” stocks where retail investors pump in money without any fundamental logic. “People are treating the stocks markets as a get-rich-quick scheme, which is worrisome,” says Shah of Samco Securities.

The Brain Behind The Crypto Bourse

‘Index Is Just A Data Point’