Being Risk Free With Low Returns 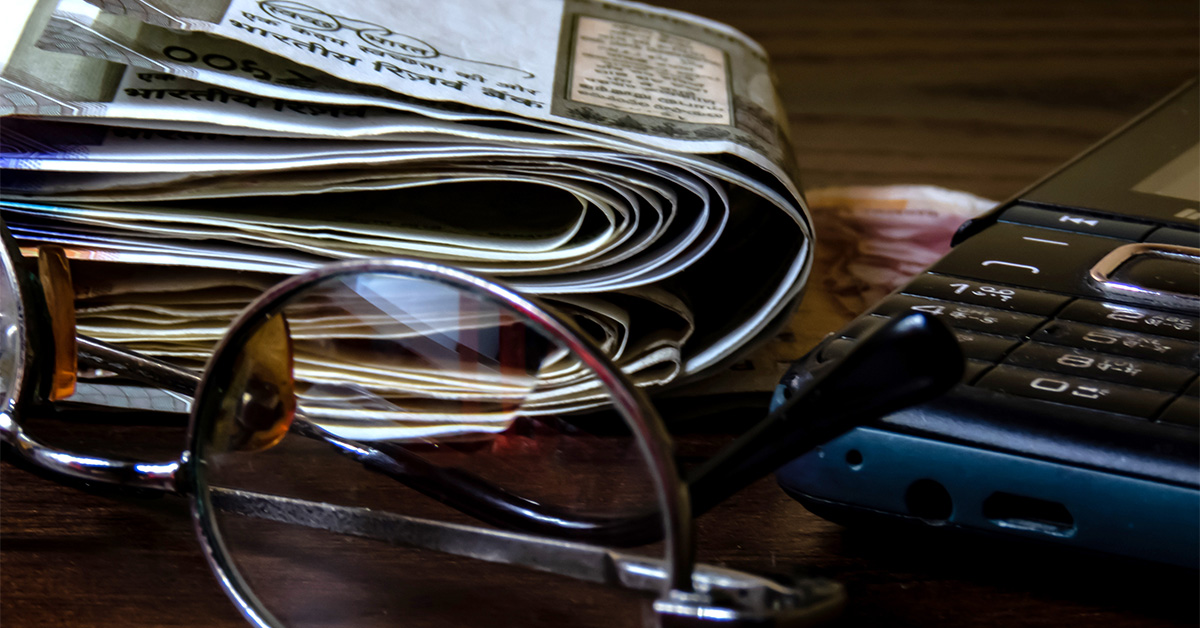 For generations, small saving schemes like Public Provident Fund (PPF) have been among the most trusted investment instruments for the salaried class, along with fixed deposits, real estate and gold.

However, in recent times, the returns on these investments have been falling. Be it PPF, or Senior Citizens Savings Scheme (SCSS) or National Savings Certificate (NSC), the interest rates on all these schemes have fallen by around 1-2 per cent over the last five years or so. PPF used to give a return of 8.7 per cent in 2014-15, which has now come down to 7.1 per cent, whereas NSC’s rate of return has dropped to 6.8 per cent during this period. SCSS interest rate during this time has fallen dramatically from 9.3 per cent to 7.4 per cent.

In April this year, the interest rate on PPF was cut sharply by 80 basis points from 7.9 per cent to 7.1 per cent. And with consistent decline in government bond yields, to which the interest rates of small savings schemes including PPF are linked, one cannot rule out further cuts in the future with PPF interest rate declining even below 7 per cent, which hasn’t happened since 1974.

Another point to note here is the difference between the absolute interest that one earns on their investments and the real interest rate that has been adjusted to remove the effects of inflation. With inflation rising to 6.09 per cent in June, the real returns on these schemes are much lower than what they were a few years back.

According to Dipika Jaikishan, Co-Founder and COO of Basis, a financial services platform for women, the only time one is growing the wealth is when savings are parked in investments that give you returns that are higher than inflation. The higher the gap between interest rate and inflation, the better your real returns are. “If your savings are not earning you inflation-beating returns, then you would need to save a lot more for certain financial objectives. Inflation can specifically hurt savings in the areas of future education and retirement goals. As money gets less valuable over time you may not be able to afford your current lifestyle at retirement,” she explains.

To understand how much sense it makes to invest in small savings schemes, given the rising inflation trend and falling interest rates, it is important to understand the different types of schemes and how they differ from other fixed income instruments like fixed deposits and debt mutual funds.

Fixed Deposit (FD) accounts are considered to be hassle-free and one of the safest investment options in the market. You deposit an amount for a specified period, and that earns interest as per the rate prevailing on the date of deposit.

PPF, on the other hand, is a government-backed long-term tax-free savings scheme where the money gets locked in for 15 years and can be extended in blocks of five years after the completion of the lock-in period. The interest earned from such savings is tax-exempt. While there is a lock-in of 15 years, one can withdraw a part of the savings after the sixth year. National Savings Certificate, another government-backed saving scheme, provides guaranteed returns along with a tax saving option. The lock-in period for the scheme is five years. The government reviews the interest rate of both PPF and NSC schemes once every quarter.

Then there is debt mutual fund scheme that invests in fixed income instruments, like corporate and government bonds, corporate debt securities, and money market instruments that offer capital appreciation. Debt funds are also referred to as “Fixed Income Funds”. They offer relatively stable returns, relatively high liquidity, but are riskier than PPF and FDs.

According to Vikas Khaitan, Co-Founder and Partner at Fintrust Advisors, among the benefits of small savings schemes are safety, long-term compounding benefit and tax savings. He adds these schemes are ideal for building a retirement fund.

“Small savings schemes have always been a popular investment option and will continue to be so. Despite a massive 70-140 basis points rate reduction across schemes announced on March 31, and the introduction of the optional new tax regime from April 2020, small-saving schemes continue to remain attractive,” he says. 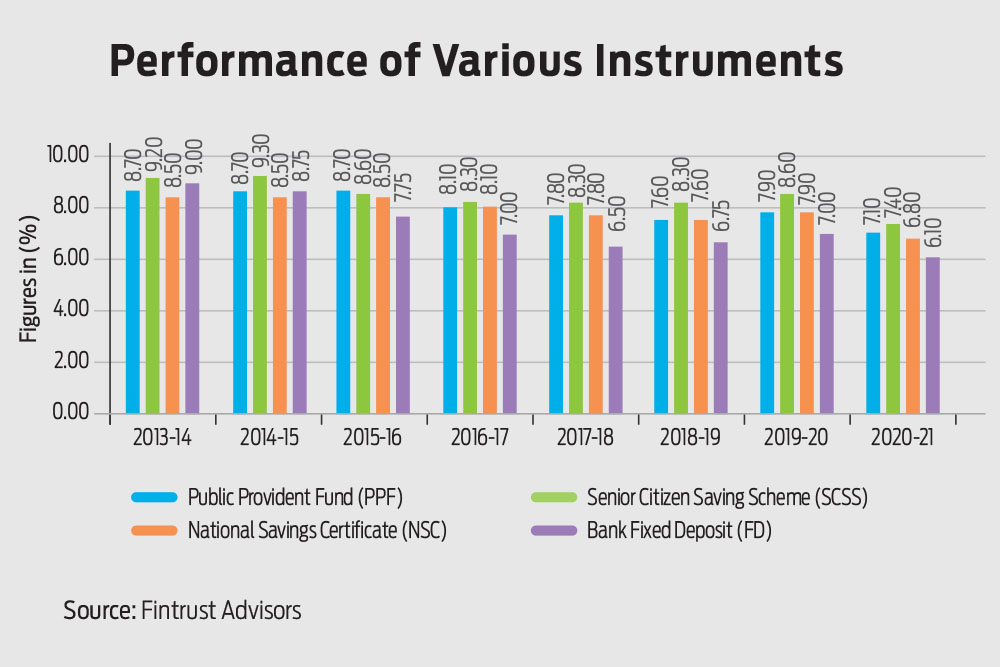 He adds small saving schemes have retained their edge  because the returns are guaranteed, fairly stable and they come with a sovereign backing. The tax savings add further to the appeal as most of these schemes offer one or the other kind of tax benefits. For example, in case of PPF, one can avail tax deductions and exemptions on the investment, interest accrued and the maturity amount. However, according to the new income tax regime announced during the Budget in February, tax payers now have an option to opt for the new system with liberalised rates, albeit with no deductions. If one opts for the same, the tax-rebate appeal of small saving schemes would no longer be there. The government eventually wants a complete transition to the new tax regime. According to Khaitan, however, the new tax regime will not be a deterrent because most of the investors in such schemes are from low and middle-income groups and “for them, the priority is safety, not tax-saving”.

“They mainly come for the simplicity, safety and high rate of returns that small saving schemes offer. According to SBI research estimates, less than 10 per cent of the total taxpayers are expected to migrate to the new tax regime as they are the only ones who will be benefited. Therefore, a majority will continue to stick to the old regime and the tax benefit it offers,” he explains.

Rajeev Srivastava, Chief Business Officer, Reliance Securities, says that compared with FDs and debt mutual funds, small savings schemes offer both superior returns and limited risk. They also offer EEE -- Exempt, Exempt, Exempt -- status during their life-time. “Since these schemes offer EEE benefit, which translates to ‘exempt’ when investing, ‘exempt’ while growing and ‘exempt’ while redemption, the return profile is significantly more attractive than its other peers available in the market, including RBI bonds and mutual funds with exposure to only sovereign paper,” he claims.

However, these schemes have limited scope as they have extended tenures of lock-in. For instance, a PPF scheme has a 15-year lock-in and an NSC has a minimum five years tenure. Also, tax benefits on small savings schemes are limited up to an investment of Rs 1.5 lakh per annum.

“It would make sense to invest  in small savings schemes upto the maximum limit of Rs 1.5 lakh allowed under Section 80C. The interest rates offered here are tax-free and possibly are the best fixed-income instruments offering tax exemption,” Srivastava says. One cause of concern for investors is that the interest rates on them have been falling over the last several years. There has been a time when PPF used to give up to even 12 per cent return, that is between 1986 to 2000. And then between March, 2002 and June, 2017, this rate remained in the range of 8-9 per cent. Now it gives 7.1 per cent return, which may fall further in future.

According to Mrin Agarwal, financial educator and founder-director of Finsafe India, PPF still remains a great investment as “it beats inflation, compounds and gives a risk free and tax free return”.

Sudden Surge In Demand For Credit Cards Among New Users