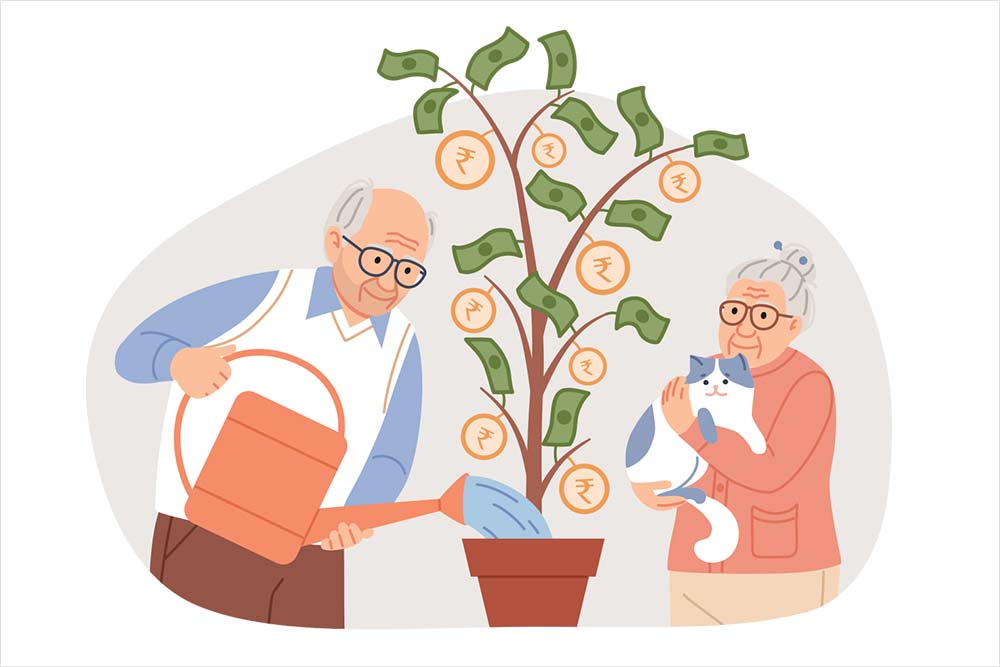 Inflation, the villainous blackguard, has finally taken a toll on one of India’s most orthodox cornerstones of retirement planning – annuities. The pension regulator has done away with the provision that annuities would have to be purchased by all NPS (National Pension Scheme) subscribers. The rule has now spared those whose pension corpus is less than Rs 5 lakh; they have been allowed to withdraw the entire amount on retirement.

That, of course, happens to be the raw news. The reality is that an annuity purchased with a relatively modest amount – Rs 5 lakh in this case – would not fetch you anything meaningful in the current scenario. At any rate, your yield from the same would be comparatively insignificant, thanks to fairly high inflation numbers.

That brings us straight to a bigger issue: the relevance of annuities in the modern context. This has helped perpetuate a raging debate even as their relative merits have been dissected with a fine scalpel. The situation has brought to the fore several engaging aspects of annuities; for those keen on retirement planning, these could be of great significance.

Among the first features that would grab your attention is the sheer range of annuity variants that are available with insurance companies, which debunks the belief that annuity is a boring, fuddy-duddy concept that few care about, at least in the lower income strata. Thanks to the formidable range, it is not difficult for an intelligent investor to work out an efficient retirement plan with the help of annuities.

So, you can devise bespoke strategies with a number of customisable features, involving guaranteed period, return of purchase price, provision for secondary annuitant, and so on. The trick is to ascertain your own specific needs (based on your risk profile and probable changes in it) and leverage some of the options that are laid on the table. Finding out the most optimum plan is the key to happiness in this case.

I have, from among the more interesting variations, chosen three very appropriate ones which can be relevant for the modern investor. In order to narrow down the universe, I have stuck to an immediate annuity, and not considered the deferred variety. My chosen three are:

Some elaboration is in order. It is clear from the list that the first two are aimed at ‘single life’, while the third is obviously meant for ‘joint life’. As for the first, the point that stands out is the time horizon – 15 years. Recent trends have suggested that people do live for long these days, which is a reflection of improvements in medical practices. Living a couple of decades after retirement has become rather common, and in this context, 15 years is a fair stretch of time. Many retired folks all around us, blessed with long lives, can serve as fine examples.

Annuity payments are typically done for as long as the annuitant is alive, in keeping with the chosen mode (See Chart 1). Now, if the annuitant dies during the guaranteed period (in this case, 15 years) payments will reach his nominee. This will continue till the expiry of this period. And when the guaranteed period ends, the payments will cease too. The policy, it will then be deemed, will terminate as well.

The idea of the return of purchase price may prove appealing to a section of investors. Here, payments will cease when the annuitant dies. The purchase price (effectively, the premium) will be paid to the designated nominee in keeping with terms of the policy. Otherwise, payments will be made in the normal way as long as the annuitant lives in line with the chosen mode of payment.

It is important to understand the issue from another perspective if there are not one but two annuitants, primary and secondary. The chosen mode of payment will remain effective for as long as the former or the latter is alive. Therefore, as conventional wisdom goes, such an arrangement can be deemed ideal for married couples.

To go a step further, this variant embraces a certain measure of broad utility. If the primary annuitant passes away, half the annuity amount will be paid to the survivor – that is, the secondary annuitant – for as long as the latter is alive. It will terminate when the survivor is deceased.

At a very basic level, low-end annuity does not seem to be quite relevant in the current context. The pension regulator has sought to address this issue to an extent; it has also altered a few other norms to make NPS more acceptable. The truth is that securing one’s own pension – formalising a system of payment when the major source of active income stops functioning – is the task of each individual.

The point I wish to make is simple: while the relative advantages of annuity may stand blunted for some of us, the idea still holds appeal for some others. The time, therefore, has come for value-additions so that it becomes truly meaningful for all.

In the absence of such value-additions, I am afraid not many investors will fully appreciate annuity products nor will they take an active interest in the same. Instead, they may wish to seek alternatives, and some of them may jump ship in favour of friendlier options. The latter may well include modern market-oriented solutions like low-cost index funds.

Among the home-grown solutions that can be recommended are systematic withdrawal plans. These allow uniform and regular withdrawals from investments accumulated in mutual funds. For an ordinary investor, this arrangement seems to present a working solution. It is quite easy to set up SWPs (Systematic Withdrawal Plan) these days. 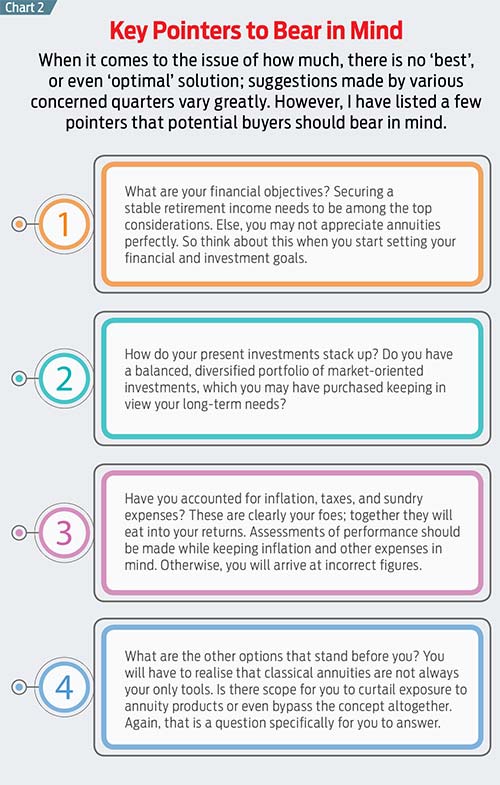 Another crucial innovation may come in the shape of inflation-adjusted annuities, which will be beneficial in a scenario marked by increasing prices. Even as I write this, the banking regulator’s latest inflation numbers are fresh in my mind. The retail inflation figure for June is 6.26 per cent, which breaches RBI’s upper band of 6 per cent.

Inflation indexation, I believe, will somewhat alleviate the situation for those who are rightly perturbed by escalating prices. An increase at a fixed rate, say 5 per cent every year, in the annuity payments, will add a cutting edge to the exercise.

Adjustments, on the other end of the spectrum, may also imply that investors will need to put in heftier amounts initially in the insurance plans in order to reap bigger benefits after retirement. Here, I am referring specifically to deferred annuity plans.

Such plans are somewhat more relevant for serious individuals who are keen to ensure a financially comfortable retirement. An immediate annuity is not their objective, in other words. In an ideal case, a deferred plan may be acquired by an individual when he is fairly young, say, at 30 years. He can perhaps start deriving a suitable income from it from his 60th birthday onwards. The right objective is to maximise the payouts.

This also means that a lifetime annuity may be a sensible choice, at least for the serious-minded. It needs to be borne in mind that the rate of return on annuity will depend on the nature of the plan that has been chosen. The smart player may view his investment as a bulk deposit which will provide him with a regular income stream.

Clearly, in the contemporary scheme of things, the sky’s the limit. In other words, annuity product pushers will never cease to tell you that you should make the maximum possible allocation in favour of their plans. I admit there is no pre-set or infallible answer to the popular question – how much should I allocate to annuity products? I refer them to Chart 2.

The author is Director, Wishlist Capital

Youth, This Dream Is Your Dream

Cover to You. Life To Your Child