Hiring the right set of people is crucial for a start-up’s success. Here’s how to get it right 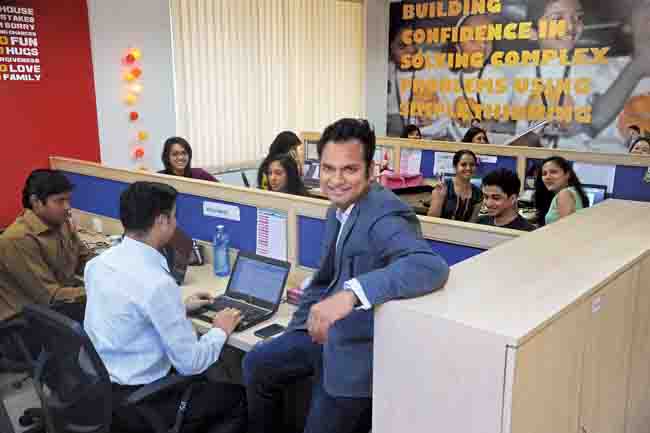 Your most important decision will be the first person you hire and your second-most important decision will be the next person you hire, is the most common advice given to start-up founders. ‘A bunch of crazy optimists’ is how Anisha Singh, CEO and founder of mydala.com, describes her founding team, which also includes some early hires besides the founding members. Hiring is important at any stage of an organisation, but for start-ups, it plays a vital role in their success or failure. “Hiring people is an art, not a science, and resumes can’t tell you whether someone will fit into a company’s culture,” sums up Howard Schultz, CEO and chairman of coffee chain Starbucks.

So how do you build a start-up with fresh hires? It all starts with the hiring process, which should be such that the inherent culture becomes that of a team that will give birth to a motivated lot who will stick towards realising a combined dream. The job of a founder after getting the right hire is to facilitate the hires to work in teams and achieve the outcome charted for the start-up. Ideally, your job as the founder is to control the processes by which the team is built. Implement processes that are poorly thought out and you’ll create a team that is bound to lose. 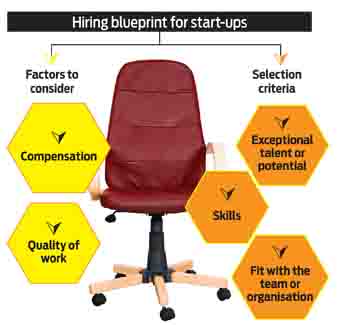 The initial hiring can do with interns or part-timers who work well. For the start-up, it helps keeping hiring costs to a minimum; for interns, fresh out of colleges or studying, it provides an opportunity to grow in a fast-learning environment, get some experience and even earn some money for their contribution. Take for instance In Open Technologies, a start-up which offers educational products and services to private and public schools. A lot of ancillary work in the initial stages was managed through hiring interns and part-timers.

They hired interns as IT support staff and part-timers for handling account books. “Initially the onus was to get the idea running and it had to be done in a limited budget,” says co-founder and CEO, Rupesh Kumar Shah. Even now, they hire interns from reputed colleges, especially zeroing in on those who are driven by a passion for a goal. In fact, Lets intern and youth4work are some of the online start-ups centred on providing college students internship, which is fast becoming the hunting ground for start-ups looking for low-cost interns for the early days.

For start-ups, the need for hiring is evident when they start getting business leads, which need to be converted into actual business. InnovAccer, a company that helps organisations to augment decision making through learning models built on structured data, initially had a team of two founders and two clerical staff for the first six months, before they started generating some revenues. One of their early customers gave them a big ticket project, which got the ball rolling for them They then hired part-time people to finish the project and went to the United States and got more business. “This gave us the confidence to hire more people. The first set of employees we hired was for technology and business development roles. We realised the need after we got 20+ strong business leads,” says Kanav Hasija, co-founder.

Time and again, the topmost challenge that most start-up founders speak about is recruiting people. It’s not raising money, closing deals, doing sales, finding partners—it’s hiring people. The challenge to attract the right talent for start-ups is largely due to their unknown identity. It is common for start-ups to hire based on referrals before word starts to spread about their work and work culture for others to join in.

“My job as a CEO is to identify the core strengths of an individual and match it with a suitable role. This helps achieve a level of working clarity for both parties on responsibilities and manner of contribution,” says Shah. As soon as they had become a 7-8 member team, they hired a full-time HR, which helped them significantly. Shah also stresses on the importance of having a meaningful interview process (See: Hiring blueprint for start-ups).

Considering most start-ups are not necessarily based out of fancy offices, it is important to offer a work environment that is employee friendly. The hiring process also needs to be cool and comfortable and not the typical interview that one conjures up of. “The general idea is to make candidates comfortable, and only then evaluate their strengths in a relaxed environment. If every panel member gets the same vibes and has a relatively similar understanding of the candidate’s strength, it is pretty much a go ahead for us,” adds Shah.

Further, they conduct a fairly thorough due diligence on what is claimed in any documentation submitted, including CVs, past experiences, and so on.

Once a start-up starts to grow, so do its hiring needs, which can get easy by smartly talking about work culture on the company website and social media using early stage hires’ testimonials. Also, get more like-minded people on board through referral rewards for existing employees. Several start-ups use agencies and campus ambassadors who help them in hiring, backed by a larger HR team.

A growing organisation also calls for senior positions with more defined roles, which mostly follows the conventional hiring process. For instance, In Open now hires many more full-time people, with the ratio of 20:1 when it comes to full and part-timers. As they have grown, InnovAccer too has become more selective on high level positions. They take more time, conduct multiple rounds of interviews and have a bigger pool of candidates to choose from. 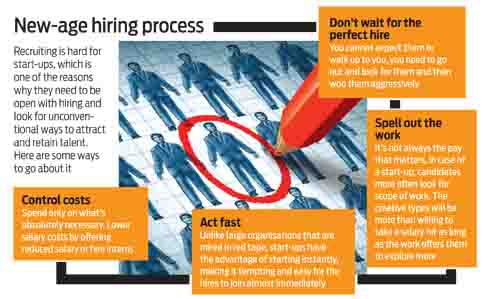 The start-up experience is something that the youth today is extensively looking out for, which in itself makes it easy to hire one. However, it comes with the challenge of retaining them not just for money, but even with the kind of work they get to do (See: New-age hiring process). While a start-up is mostly short of funds in the initial stages, it is not a reason to compromise on the quality of candidates as it will have a natural impact on the business they are about to grow.

One of the things that worked for In Open was to show the team member that he was valued, and they did this by revisiting the salary twice a year, increasing it if the performance merited it. “For example, we have people in our company who have been promoted from being a manager to being an Assistant Vice President in less than two years,” says Shah. But while incentivizing employees is important, one also needs to sell the idea of the startup to the employee in an effective manner. “We share a high-level idea up front on a call and invite them to our office space, make them familiar with the team and discuss or brainstorm on the company’s core ideas face-to-face,” says Hasija.

Shah agrees, “The most efficient way to sell the idea of your start-up to your employees is to have frequent communication with them. Make every team member interact with customers so that they understand the impact of the company they work in.” Like any company, start-ups need to hire only when it is absolutely necessary and have people to play multiple roles in the organisation. It is also necessary to link hiring costs to return on investment (ROI), so that the salary bills are kept within control. For a startup, hiring is less about getting the best people, but more about getting the right people for the job; and that is half the battle won.