Pune: The queen of Deccan

Pune’s transition from a retiree’s paradise to now being the top choice of youth for higher education and jobs alike has been a rapid one. Earlier known as Poona, Pune today is a dominant educational centre for the western India, having prominent institutes like Pune University, Film and Television Institute of India (FTII), Fergusson College, Deccan College and National Defence Academy (NDA).
A lot of automobile ancillary companies have set up their base in the city. Many MNCs as well as domestic industry players like General Motors, Tata Motors, Volkswagen, Mercedes, Mahindra & Mahindra and Bajaj Auto have a strong presence here.

Affordable homes
North Pune: The region has a very good connectivity as it is connected via NH4 Pune-Mumbai Highway and Nasik Highway, which is one of the biggest industrial zones in Asia. The proposed airport near Chakan is further going to boost the infrastructure and connectivity across the region. As the region is within the industrial belt, there are good chances of affordable housing. Some of the prominent places for affordable housing segment in the region are Chinchwad, Akurdi, Pimpri-Chinchwad Road, Pradhikaran, Chakan, etc.
East Pune: This region has seen good growth in terms of IT industries. Also, announcement of SEZs such as EON Free Zone has further improved the infrastructure of the area. With the availability of large land parcel, the city has good chances of affordable housing in the region. Areas such as Kalyani Nagar, Hadapsar, Mundhwa and Manjri are some of the prominent places for affordable housing in the region.
West Pune: The Western corridor has easy associability to cities like Mumbai, Satara, and Kolhapur via Pune-Bangalore Highway. Close proximity to several IT park such as Rajiv Gandhi InfoTech Park— the largest IT Park in the city has further boosted the growth in the region. The proposed ring road is further going to enhance the connectivity with the region. Some of the prominent areas for affordable housing segment are Pimple Nilakh, Pimple Saudagar, Wakad, and Lavasa Road.
South Pune: Due to recent developments in Undri, Pisoli, Mohammadwadi and Katraj, this region has come into focus. The region has close proximity to many IT hubs such as Magarpatta IT Hub. Warje and Ambegaon areas enjoys the strategic advantage due to their connectivity with Mumbai-Pune expressway and Hinjawade. The region also hosts some of the big township projects such as Nanded city, giving further boost to realty sector. Land availability and comparatively affordable price range has further opened the door for affordable housing segments in areas such as Ambegaon, Katraj and Kondhwa. 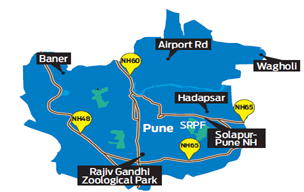 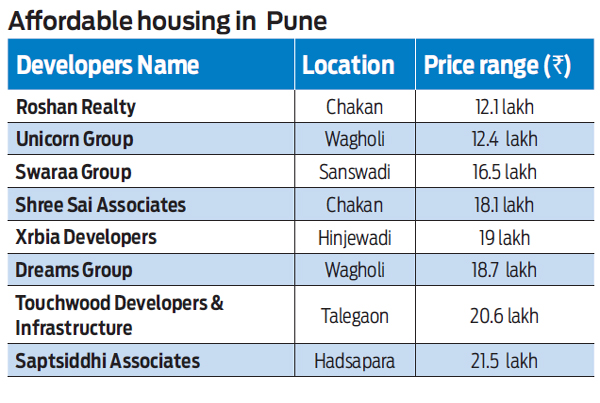 Pune has become a focal point for the developers due to boom in IT and infrastructure sector. The Pune Smart City Development Corporation Limited (PSCDCL) has approved processes to undertake 15 projects with eight of them focusing on the local area development for Aundh-Baner-Balewadi. The proposed metro rail infrastructure will boost the connectivity of northern locations such as Pimpri-Chinchwad and Hinjewadi with the centre of the city. However, it is still in the planning stage. Pune also features in the list of Smart Cities which is a long term boon for the growth of real estate market. Pune will continue to witness a major inflow of manpower and job opportunities in the years to come.