With a slew of infrastructure projects lined up, Ahmedabad is all set for another leap

Situated on the banks of river Sabarmati, Ahmedabad is a city where business is a way of life. Named after the 15th century ruler Sultan Ahmed Shah, the city’s inhabitants—Amdavadis are known to have “inborn business mentality”. The city is situated in the cotton growing region of Gujarat and is surrounded by areas where skilled and cheap labour is readily available.

Ahmedabad was, among the first 20 cities chosen under ‘Smart City Project’ and recently got its first instalment of funding. Gujarat International Finance Tec-City or GIFT city, which is under construction, lies between Ahmedabad and Gandhinagar and aims to cater to the creamy layer of the country by providing world class infrastructure and facilities.

The top residential localities in Ahmedabad are Bodakdev, Vastrapur, Prahlad Nagar and Thaltej in the west of the city, Shahibaug in the north and the areas in the south east such as Kankaria and Chandola Lake. A majority of affordable homes are coming up in areas like Ramol, Vastral, Narol, Vatva and Nikol. With ONGC office situated nearby Chandkheda, lying in the northwest of Ahmedabad, this area has developed as a prized residential locality.

Jasodanagar and CTM have greatly benefited due to their proximity to the Ahmedabad-Vadodara express highway.The growth corridors are also on the Sarkhej-Gandhinagar Highway, the Sardar Patel Ring Road and Maninagar.

The GIFT city is another golden opportunity for the city to grow over the long term. The GIFT city, being India’s only global financial and IT hub has become a focal point for domestic and global IT and ITeS companies.

An International Financial Services Centre (IFSC) has also been set up. The IFSC spreads over 261 acres and is part of the GIFT project. The IFSC is likely to generate over 2 lakh jobs in the coming years. The sophisticated and strategically planned GIFT city might become a model for sustainable development in the years to come. With an estimated budget cost of Rs 70,000 crore, the GIFT city aims to become an integral catalyst for development in Ahmedabad and the suburbs.

Having institutes like IIM, MICA and NID, Ahmedabad is a hotspot for young and talented graduates. The infrastructure development in and around Ahmedabad is one of the prime reasons behind the city becoming a preferred destination for such premier institutes. Delhi Mumbai Industrial Corridor (DMIC) is also a key growth driver for job opportunities, trade and investments in Gujarat. This project aims at developing industrial clusters across six states and envisages development of industrial clusters and smart cities with rail road, port and air connectivity.

The financial capital of Gujarat would soon get transformed as the largest industrial hub in the state. The city has achieved phenomenal growth over the last decade due to significant growth of trade, business and investments. The steep rise in population in recent years has increased the demand for real estate. Infrastructure growth to connect the suburbs of Ahmedabad will increase the demand for micro markets as commuting time will get reduced significantly. Commercial real estate demand is already very high and with huge foreign direct investment (FDI) coming into the GIFT city, it will change the real estate market to a more progressive growth zone. Affordable housing segment in Ahmedabad suburbs has a very strong prospect due to the growth of trade and business activities. 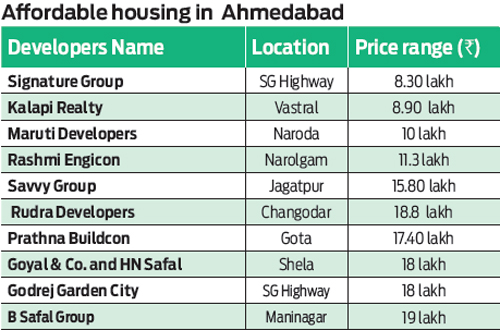 Pune: The queen of Deccan