Home Fixed assets  »  Get on to realty highway, via Agra

Get on to realty highway, via Agra

Other than its historical significance, it is also a vital link in the North-South and North-West railway lines. Just 200 km from the national capital and 360 km from state capital Lucknow, Agra is well connected by road with national highway (NH11) connecting it to Jaipur and NH3 connecting it with Gwalior, 120 km away.

The city is also famous for its leather goods, beautiful carpets, gold and silver jewellery and handicrafts, such as zari zardozi, marble and stone carving and inlay work.

Of late, Agra has seen rapid development in infrastructure. Agra’s first mall, the TDI Mall-cum-multiplex– on Fatehabad Road has found favour with residents and tourists alike, indicating the appetite for such spending.

The retail industry in Agra is expected to expand by 40 per cent than its existing size over the next five years, with organised retail growing at 15 per cent in the Agra metropolitan region.

Most importantly, a generational shift is resulting in a lot of latent demand being generated from old time residents who wish to move to newer dwellings and avail of modern living amenities.

The price for plotted development is lower than that for high-rise apartment development, clearly indicating the shift in interest towards apartments over independent homes. Further, the property scene in Agra is witnessing a boom because it is an untapped market with good law and order situation, making it a safe investment destination. The growth rate is 40-45 per cent, fuelled by middle class housing. 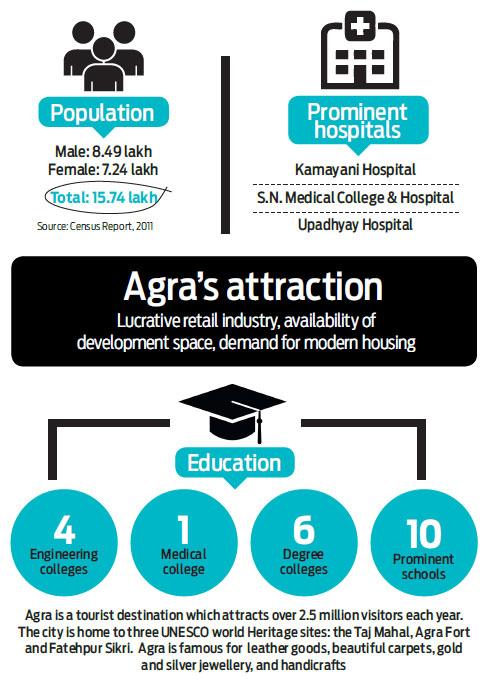 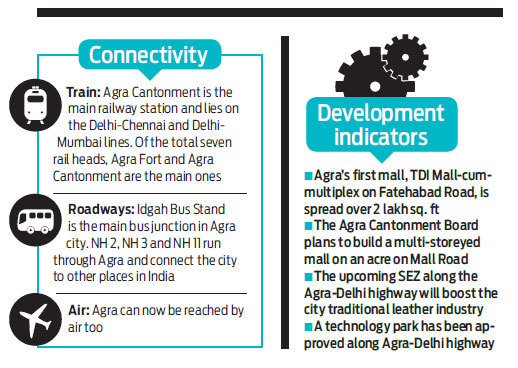 In 2007, some of the old buildings were redeveloped as shopping complexes in areas like Sadar Bazaar, which serves the neighbouring cantonment areas and the posh residential colonies around, by becoming the high street retail location of Agra. Moreover, over 7,200 small scale industrial units are spaced out all over the district, which has fuelled the need for housing and real estate in Agra.

On the commercial real estate front, traditional places like Raja ki Mandi, Loha Mandi, Rui ki Mandi and Krishi Mandi continue to be the main retail areas in Agra city. These areas are spread along MG Road, Sadar Bazaar and SanjayPalace. The push towards organised small-scale industry and the region being a significant export hub are added attractions that are giving a boost to the real estate demand, and makes Agra a worthy investment option.