The year 2014 proved to be a momentous one for the ‘older-than-history’ city of Varanasi.

Varanasi, also known as Banaras or Kashi, is one of the oldest living cities in the world. It is located 320 km south-east of Lucknow, on the banks of the Ganga in Uttar Pradesh. In the past one year, Varanasi has made it to the headlines for being the constituency represented by Prime Minister Narendra Modi, giving it the much needed development push. Known for its rich tapestry of music, arts, crafts and education, Varanasi abounds in the exotic art of silk weaving, which manifests itself in precious Banarasi silk sarees and silk brocades that are cherished as collector’s items.

Varanasi is also the seat for prestigious educational institutions like the Banaras Hindu University (BHU), Sampurnanand Sanskrit University and Mahatma Gandhi Kashi Vidyapeeth, among others. The local economy depends on religious tourism that drives people to the city; it also has an ancillary industry, active in textile weaving, crafts and art.

At the moment, the city can be divided into three distinct zones— the old city of the ghat area, the central city and the peripheral area comprising the trans-Varuna area. The old city has a high density core area with narrow, inorganic street patterns. It has a concentration of religious structures, bazaars and old buildings with traditional architecture. The Varanasi urban agglomeration covers an area of 112.26 sq. km and consists of seven urban sub-units—Municipal Corporation of Varanasi (MCV), the Varanasi Cantonment Board, Maruadih Railway Settlement, census towns of Sheodaspur and Phulwaria, the Ramnagar Municipal Board and the notified town area of Banaras Hindu University. The present area under the MCV jurisdiction is 79.79 sq. km. 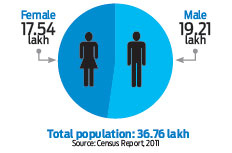 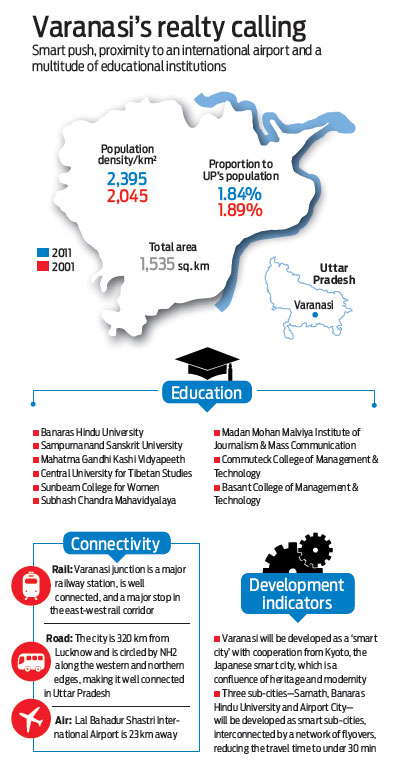 The most recent push towards development has come after Prime Minister Narendra Modi signed a pact with Japanese Prime Minister Shinzo Abe in 2014 to turn Varanasi into Kyoto-like smart city. Both cities have a rich history of temples and monuments, but Kyoto has been able to modernise its basic infrastructure like roads while keeping its heritage intact. Under the smart heritage cities programme, the plan is to develop Varanasi into a smart city, the way Kyoto was developed—a confluence of heritage and modernity.

According to the proposed plan, the city’s heritage structures are to be restored even as its infrastructure is upgraded. Three subcities— Sarnath, Banaras Hindu University and Airport City—will be carved out as smart sub-cities, interconnected by a network of flyovers. It will ensure that commuting between sub-cities takes no more than 30 minutes.

Further, the state government intends to develop a “heritage arc” connecting Agra, Lucknow and Varanasi on the lines of the “Agra- Jaipur-Delhi triangle” in order to boost tourism.

Prices in Varanasi have increased by at least 20 per cent since last year and are expected to go up further owing to the announcement of the smart city project. Land prices along the Lal Bahadur Shastri Airport have shot up after it was declared an international airport. More recently, after Amul announced setting up of a factory in Varanasi, there is a bullish sentiment pushing prices further up. The healthcare facilities proposed by Apollo and Fortis will boost the city’s healthcare needs. Naturally, interest level of builders such as Amrapali, Nilgiri Infracity, J.K. Realty, Guru Kripa Developers and Winsome Developer, among others, has gone up immensely in this holy city.