Home Fixed assets  »  A home of their own

A home of their own

Prime Minister Narendra Modi’s ‘Housing for all by 2022’ mission has given the much needed boost to the real estate sector in the country and many realtors, seeing huge demand, are moving towards the affordable housing segment.

As per the Government of India, there is a shortage of 1.87 crore homes in urban India, 95 per cent of which is accounted for by the EWS4 (households with annual income of less than Rs 1 lakh) and LIG segments (households with annual income of Rs 1-2 lakh). Affordable housing is aimed at those who earn between Rs 10,000-25,000 per month and can afford to buy a home within the budget of Rs 5 lakh to Rs 25 lakh. 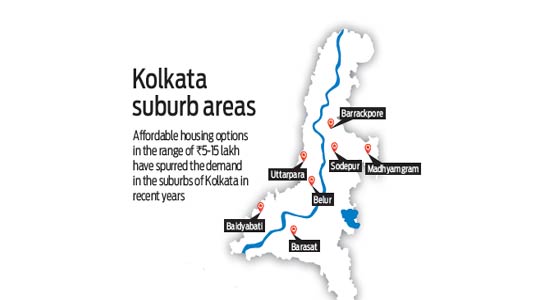 Kolkata suburbs
Many industries have recently come up in the suburbs of Kolkata and good connectivity through roads and highways has led to many affordable housing projects coming up in the outskirts. Rajarhat II, Madhyagram, Barasat, Batanagar, Barackpore, Belur, Hooghly, Maheshtala, Uttarpara, Baidyabati are few of the areas where affordable housing and suburbs are getting extended.

Affordability and availability of land is driving real estate builders to take up new projects and as more and more industries are setting up shops in these areas, the demand for affordable houses is only soaring. All major IT companies like IBM, TCS, Cognizant, PWC, Skytech, ICICI OneSource, Tech Mahindra, HCL, etc, already have their offices in these areas and many small and medium enterprises are also coming up in these areas.

Apart from being home to major IT companies, the major industrial output of Kolkata is also focused on leather garments and bags, apparel, hosiery, PVC cables, rod iron furniture, machinery and components, silicon products, electronics and insulated cables. Development of financial services and banking, insurance, discrete and process manufacturing, as well as retail and distribution have also created job opportunities.

Towns such as Uttarpara or Konnagar (which is around 40 minutes drive from Kolkata), north of the city, and Sonarpur and Rajpur (one-hourdrive to the south east side of the city) is witnessing a steady increase in supply of condominiums.

A substantial infrastructure growth is also being witnessed in the Kolkata suburbs. Various flyovers and underpasses have been proposed and many are under construction to reduce congestion and improve connectivity. Madhyamgram is one of the ideal places for homebuyers as it is away from the city and is in close proximity to major IT hubs. The airport is just 8 km from here and the rail network links this area to prime locations like Barasat, Rajarhat, New Town, Park Circus, among others. 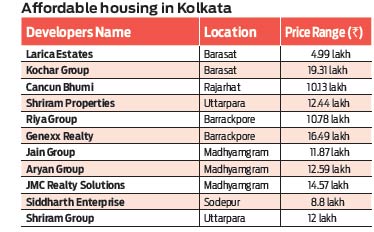 The affordable housing segment has got a big boost in Budget 2016 presented by finance minister Arun Jaitley. The FM has said that the government will allow 100 per cent deduction for profits to housing projects building homes up to 30 sq metres in the four metro cities and 60 sq metres in other cities. The said benefit will be available only during June 2016 to March 2019 and is completed in three years. First time buyers have also been given a big boost and they will get deduction for additional interest of Rs 50,000 per annum for loans up to Rs 35 lakh sanctioned in 2016-17, where house cost does not exceed Rs 50 lakh.

Real estate market in Kolkata suburbs is changing dramatically as people want to move away from the hustle and bustle of the city. The benefit of being located near major IT hubs, backed with good road connectivity and infrastructure is all set to make the suburb regions of Kolkata an affordable housing hotbed in the coming years.