Stitching up a plan

With a slew of start-ups being launched, it’s only those with passion and hunger for success who eventually come out trumps. Take the case of Abhijeet Mhatre, who gave up a top job with an international banking firm to follow his passion of camping and started Letscampout even as he was working. It helped that the camping programmes were scheduled over weekends and after four years of managing both his job and his business, he quit his job in 2014 to invest full time into the business.

The story is somewhat similar for Punit Chokhani, who gave up a lucrative career in institutional equity research to start his own venture, 16stiches.com, an online custom clothier specialising in high quality shirts for men. Chokhani was not alone; he got his wife Priyanka who was working in an ad agency to join him in his venture. “At our age, responsibilities are less, and if you do not do it now, you will never do it,” he says.

Basics in place
Start-up is all about ideas. It takes a bright mind to spot one, find a solution, and execute it. Take the example of Pranshu Maheshwari, who had worked in the creative side of the advertising industry for 14 years and, customised and theme-based invitation cards was his calling.

“I started Inneriver-Design and Creative Solutions by testing the cards and invites for family and friends, before I dived in full time,” he says. Maheswari did research on other market players and realised that his offering had the potential to become big. “Moreover, there was no such company that was offering idea-based invites with full production and printing services,” he says. 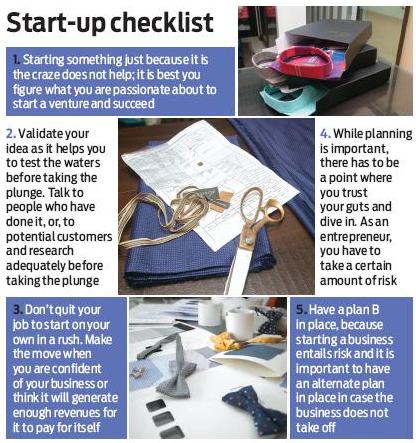 In case of Chokhani, the job of an analyst entailed meeting CEOs, fund managers, and dressing up was part of the job. “It also meant I bought off-the-shelf ill-fitted and expensive shirts,” he says. Realising this, he came up with his business idea which offered good quality products directly to the consumer, coupled with convenience and great customer service and at a good price.

But a business not just depends on ideas. It needs money and that is where basic financial planning is needed. The Chokhanis put in some of their savings and also took some money from family and close friends. They knew that they needed to have enough funds to survive a period of two or more years. Also, as a plan B, they always knew they could get back to their jobs. In case of Letscampout, the initial amount—around Rs 2.5 lakh—­came out of the additional per-diem allowance Mhatre used to get from his job since he had been relocated to a different city.

It helped that he started small, with a single campsite and grew slowly. “For the first four years, profit was not a consideration and all the earnings were pumped back into the business,” he states. Mhatre also put away money from his income into FDs and SIPs to build a corpus that would provide a cushion in case of an emergency. The common sense that rides for start-ups is that the first few years are always tough and one needs to keep a strong check on costs.

Also, when you decide to leave your job is entirely a matter of choice and, the timing depends on several factors. For Mhatre, the decision was simpler. When he knew that the earnings from the business were enough to replace his current income, he quit his job. Even if it is not possible to manage your business with a full-time job, a part-time job can come in handy. Every start-up founder has memories of tough days in the beginning. “When you work for someone you may work for 9-10 hours a day.

However, when you step into an entrepreneur’s role, you end up working 24x7,” adds Mhatre. But all this comes with the satisfaction of being one’s own boss. The freedom, the sense of achievement of doing something on your own, of setting your own schedule, doing what you love, and finally, unlimited earning possibilities, make it a risk worth taking.

Focus On Assets; Do Not Get Distracted By The Noise

Once Again, TCS Becomes The Most Valued Domestic Firm

Steps To Generate Wealth in 2021