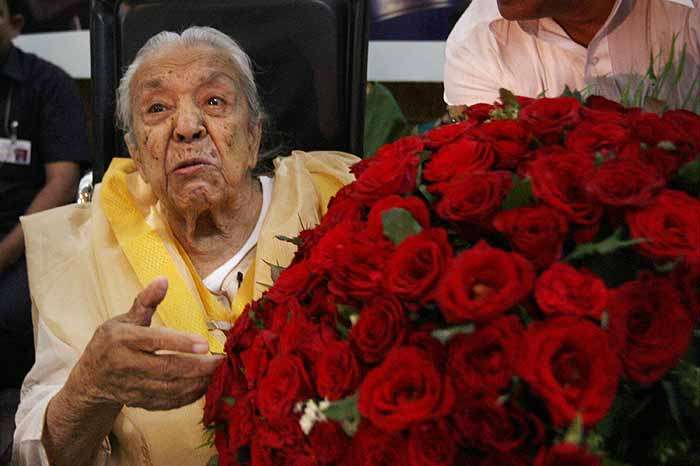 Zohra Sehgal, a quintessential Bollywood diva who essayed character roles with aplomb in a career spanning over seven decades in both theatre and cinema, died here today at the age of 102.

"She was admitted yesterday and diagnosed with pneumonia. A heart patient, she suffered a cardiac arrest and passed away," a senior doctor at the hospital said.

"She was unwell for last three-four days," daughter Kiran told PTI. Sehgal would be cremated tomorrow at 11 AM at the Lodhi Road crematorium.

The news was broken in the night by historian Irfan Habib who tweeted, "Just confirmed that Zohra Aapa is no more..."

In another tweet, he said, "Extremely sad to know about d passing away of Zohra Sehgal, a woman who lived a full life on her own terms. Great loss to art and culture. RIP."

Sehgal, a vivacious personality, started her career as a dancer with Uday Shankar in 1935. She had appeared in many Bollywood films as a character actor as well as in English language films besides television series and plays.

Born on April 27, 1912 in Saharanpur in Uttar Pradesh in a traditional Muslim family, Sehgal, third of her seven siblings, grew up in Chakrata near Dehradun and was sent to Lahore to pursue her higher education.

As a dancer, she performed across Japan, Egypt, Europe and the US. She married scientist, painter and dancer Kameshwar Sehgal in August 1942. The couple had two children, Kiran and Pavan. Kameshwar died in 1952 and Zohra raised the children all by herself.

On her return from foreign trips, Sehgal had to don the burqa while studying in Lahore's prestigious Queen Mary College, meant for daughters of aristocratic families, an institution where strict purdah was observed and males invited to speak there were put behind a screen.

She choreographed for a few Hindi films as well, including classics like Guru Dutt's Baazi (1951) and the dream sequence song in Raj Kapoor's film Awaara.

Sehgal moved to London on a drama scholarship in 1962, where she appeared in many TV productions including The Jewel in the Crown, Tandoori Nights, My Beautiful Laundrette and The Raj Quartet.

Kiran, herself an Odissi dancer, expressed grief that during her dying days, her mother could not even get the government flat she had asked for.

"She was always so full of life and energy. I am in very different state of mind right now... But, what is more tragic is that during her dying days, she could not even get the government flat she had asked for," she told PTI.

Rich tributes poured from the film industry, soon after the news of her demise.

"Zohra Sehgal passes away at 102 yrs...What a journey and what an immensely lovable co-star! Prayer for her blessed soul!," actor Amitabh Bachchan tweeted.

Filmmaker Madhur Bhandarkar paid his homage by sharing a vintage picture from the 1940 on Twitter.

"Zohra Sehgal, during a stage performance..." he said on his account.

"My condolences on the sad demise of the veteran actress Zohra Sehgal. Her legendary contribution in the field of art & cinema will live on," Javadekar tweeted.

Television producer Siddharth Basu tweeted, "Forever young at heart & in spirit even at 102, the irrepressibly endearing Zohra Sehgal finally belongs to the ages. May she rest in peace."

"Prolific & full of life, Zohra Sehgal made a mark through her acting which is admired across generations. Saddened on her demise."