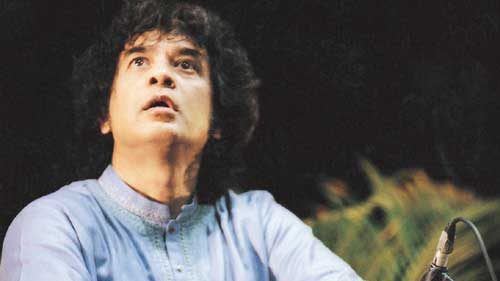 While Slumdog Millionaire picked up seven BAFTA awards in a ceremony in London, the Indian presence was also felt at the Grammys with tabla maestro Zakir Hussain winning in the Contemporary World Music Album category for his collaborative album Global Drum Project.

Global Drum Project is the second collaboration between Hart and Hussain after their compilation Planet Drum which was released in 1991 and went on to win the first-ever Grammy Award in the World Music category.

But the other Indian Grammy hopes, slide guitarist Debashish Bhattacharya and classical vocalist Lakshmi Shankar who were nominated in the Best Traditional World Music category were disappointed as they lost out to Ladysmith Black Mambazo, a South African acappella singing group.

Till date only three Indians have won Grammy Awards - Pandit Ravi Shankar, Pandit Vishwa Mohan Bhatt and now Ustad Zakir Hussain. Pandit Ravi Shankar has won the Grammy thrice (1967, 1972, 2001), while this year's award is the second for Hussain after a gap of 18 years. Bhat got the award in 1994 for his album A Meeting By The River.

The ceremony this year was high on drama as a tearful Jennifer Hudson remembered her slain family while accepting her first Grammy. It has been a major personal comeback for the singer whose mother, brother and nephew were murdered last October.

Another diva who caused a stir was Rihanna, but she did so by her absence as she scratched her performance minutes before the function began.

The reason seems to be singer boyfriend Chris Brown, who was also slated to perform at the show but cancelled and is now facing investigation for allegedly assaulting an unidentified woman.

Rapper MIA, who has been nominated for an Oscar with Indian music maestro A R Rahman for the song O Saya from Slumdog Millionaire, performed at the Grammys despite being scheduled to deliver her baby on the same night. MIA was nominated under two categories but failed to bag any prizes.

The Grammys, considered the most prestigious awards in the world of music, were otherwise dominated by British talent with Britons making up 13 of the 20 contenders in the main categories.

British band "Radiohead" were among the early winners and picked up two trophies for their album In Rainbows, for best Alternative Album and best Special Limited Edition Album.

They were joined by compatriots "Coldplay", who won the award for best Pop Performance by a Duo or Group with Vocals for their track "Viva la Vida" from the album of the same name after having notched up seven nominations.

It was also the year of the newcomers as three fresh British talents -- Adele, Duffy and Estelle-- picked up trophies at the prestigious music award function held at the Staples Center here.

Adele picked up an award for Best Female Pop Vocal Performance for the song Chasing Pavements while Welsh singer Duffy won in the category of Best Pop Vocal Album for her debut compilation Rockferry.

Veteran rocker Bruce Springsteen, also known as 'The Boss' took home his 19th Grammy for his song Girls in Summer Clothes which won the award for the Best Rock Song.

Rapper Lil Wayne picked up three Grammys after being nominated in eight categories.