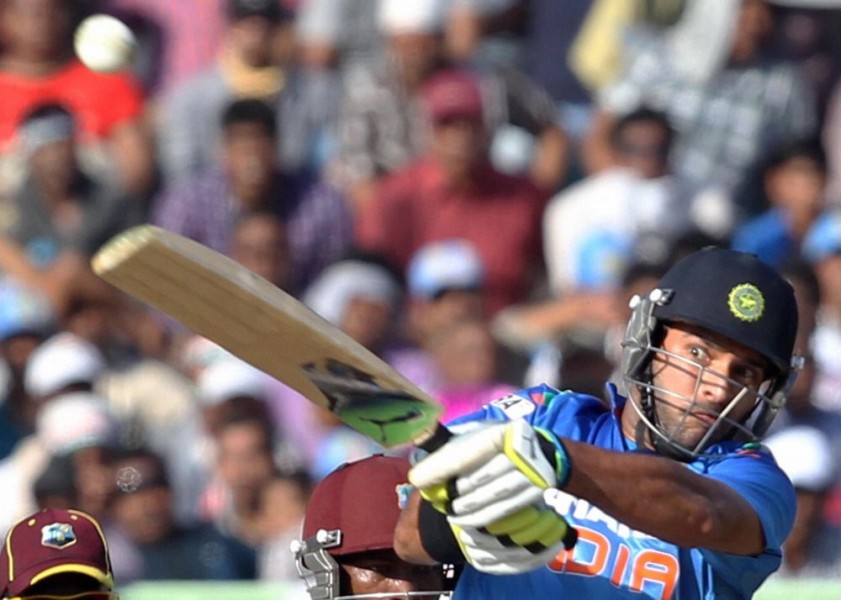 Print
A
A
A
increase text size
Outlook March 30, 2016 16:00 IST Yuvraj Ruled Out of Remaining ICC World Twenty20 Matches Due to Ankle Injury

In a setback to India before their semifinal clash against the West Indies, all-rounder Yuvraj Singh was today ruled out of the ongoing World Twenty20 due to an ankle injury.

Yuvraj has been replaced by Manish Pandey, who was called in as cover for him on Monday.

"The ICC has confirmed that the Event Technical Committee of the ICC World Twenty20 India 2016 has approved Manish Pandey as a replacement player for Yuvraj Singh in India's squad for the tournament," the ICC said in a statement.

Yuvraj twisted his ankle while batting in the previous match against Australia in Mohali and has been "ruled out of further participation in the tournament".

The left-hander, who was dismissed on 21 in the last match, was in pain after twisting his ankle and had to be attended by the physio in the middle.

The 26-year-old Pandey has played two T20Is, which were against Zimbabwe in Harare in July last year. He has also played four ODIs.

Pandey last played for India in the fifth and final ODI at Sydney in the bilateral series in Australia and signed off with a maiden century.

"Any injury or illness-based replacement requires a written submission to the Event Technical Committee along with a diagnosis from a medical practitioner as to the extent of the injury or illness. Once replaced, a player may not return to the squad save as an approved subsequent replacement for another injured or ill player," the ICC stated.

"It will have an impact. It was his three overs which allowed us to come back in the contest (against Australia). So he will be missed. Unfortunate, it's an injury that happened during the game," Shastri said in the pre-match press conference.

Yuvraj had struck with his very first ball against Australia, grabbing the crucial wicket of rival skipper Steve Smith.

The 34-year-old had conceded a mere 19 runs in his three overs, which helped India claw back after the initial onslaught by the Aussies.