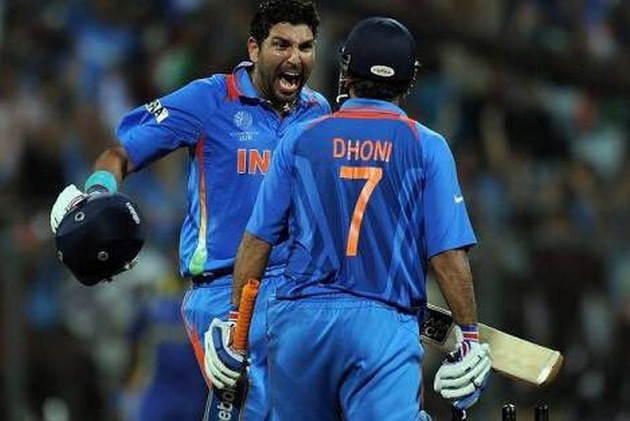 Yuvraj Singh and Mahendra Singh Dhoni turned the clock back with a batting masterclass as the old warhorses' twin tons powered India to a 15-run win over England in the second One-day International and take an unassailable 2-0 lead in the three-match series here today.

Coming into bat with India struggling at 25 for three, Yuvraj and Dhoni brought into play their years of experience to not only bail the team out of trouble, but also propel them to a formidable 381 for six in the stipulated 50 overs.

In reply, England fought to the end with captain Eoin Morgan leading the chase with a swashbuckling century, only for his side to fall short narrowly at the packed Barabati Stadium.

Needing 22 off the final over, seamer Bhuvneshwar Kumar kept his nerves and conceded a mere six runs, even as triumphant skipper Virat Kohli punched his fist in the air in jubilation.

Despite being set a mammoth target, England were in the game as long as Morgan was in the middle, but bowler Jasprit Bumrah put paid to the visiting side's hopes when he calmly ran out the England skipper in the non-striker's end after he backed up too far.

Yuvraj was on fire from ball one and hammered 21 fours and three sixes in his career-best knock in ODIs. The southpaw, brought back into the national team, could not have silenced his detractors in a better way as got to his 14th ODI hundred, which was his first since the 2011 World Cup.

It was a typical innings from Dhoni, who took his time initially before cutting loose to tear the opposition bowlers apart.

Dhoni too crossed the three-figure mark after a while with his last hundred coming way back in 2013 when he struck an unbeaten 139 against Australia at Mohali.

He ended up hammering 10 fours and half a dozen sixes, scoring his 10th ODI hundred in the process and first since handing over captaincy to Kohli.

It was raining sixes and fours especially in the last 10 overs with India plundering 120 runs.

Beleaguered England were required to bat out of their skins to overcome the imposing target, which they could not.

Even a target of 382 did not look safe enough as England almost scripted a brilliant chase with Morgan's valiant century.

With Morgan in full flow on a benign pitch and the heavy dew working to their advantage, England needed 28 from 10 balls, but Bumrah's presence of mind saved the day for India. Morgan finished with 102 from 81 balls with six fours and five sixes.

Liam Plunkett straight drove one with an anxious Morgan out of the crease as Bumrah gathered the ball and disturbed the stumps with a cool-headed display. It was all over for England who ended at 366 for five.

Bumrah returned with 2/81, while Ravichandran Ashwin was also among wickets with 3/65. Left-arm spinner Ravindra Jadeja played his part, conceding just 45 runs for one wicket in his full quota of 10 overs.

Earlier, in a vintage display, Yuvraj and Dhoni put on 256 from 230 balls, the second highest for the fourth wicket behind Mohammad Azharuddin and Ajay Jadeja's 275 against Zimbabwe, incidentally at the same venue in April 1998.

In the process, Yuvraj lived upto his word of playing freely alongside his former skipper Dhoni with the burden of captaincy being take away.

In his comeback series after more than three years, India's 2011 World Cup hero smashed a career-best knock, his first century since the victorious campaign six years ago.

The Indian duo overtook Hashim Amla and AB de Villiers' 172 as the best for the fourth wicket.

Yuvraj launched Plunkett inside out over extra cover boundary to move to 99 before calmly tucking a short ball to square leg to bring up his century. A standing ovation followed as Yuvraj raised his arms, looked up and thumped his chest.

The newly-married Yuvraj initially survived some anxious moments with his edges flying around, one of them going in the vacant slip cordon.

Yuvraj completed his 150 after a DRS referral went in his favour. On 149, Yuvraj was given out caught behind by umpire Anil Choudhary but the left-hander took a referral that showed the ball had bounced before Jos Buttler had taken the catch.

The Indian duo toyed with the English attack left, right and centre, even as Dhoni completed his century with a single off Chris Woakes.

Yuvraj's innings came to an end when he edged Woakes.

It was an incredible recovery by the two veterans as they saw off a wobbly first 30 minutes when India had lost Lokesh Rahul (5), Virat Kohli (8) and Shikhar Dhawan (11).

Woakes reduced India to 25/3 in 4.4 overs in a kind of collapse that was seen at home for the first time since 2007 versus Australia.

Woakes squared up Rahul before inducing an edge at the second slip, while in the last ball of the same over he dismissed Kohli with Ben Stokes taking a diving catch.

In his next over, the English pacer brilliantly set it up for Dhawan with two short balls followed by a full delivery way outside the offstump as the batsman dragged it on to the stumps, giving Woakes a first spell that read 5-3-14-3.

India were staring down the barrel when Kohli also got out, paving the way for Dhoni and Yuvraj to take over.

Surprisingly enough, Morgan did not bring on his best bowler Woakes after his first five overs, even as India upped the ante.

Woakes (4/60) was reintroduced only in the 39th over but by then India had closed in on 300. More England kept themselves in line with Morgan's century under pressure, coming after half tons from Jason Roy (82), Joe Root (54) and Moeen Ali (55).

But Ashwin made up for his ordinary outing last time and snared the wicket of Root straightaway after being introduced in the 20th.

Dropped on 37 by Jadeja, Ali went on to post the fourth half-century of the lineup and gave the captain fine support, reducing the deficit to 83 from 40 balls.

With both batsmen looking ominous, it was Bhuvneshwar, who replaced Umesh Yadav in the only change for today's game, who gave a crucial breakthrough by removing Ali with a slower ball.

After being dropped, Roy also had an extended stay till he was castled by Jadeja, who continued his spell at the other end.

In the next over, Ashwin bowled the dangerman Ben Stokes (1) to reduce them to 173/4 and derail their chase with skipper Morgan waging a lone battle.

Ashwin, then, brilliantly foxed Buttler by dropping the ball outside leg as Dhoni whipped the bail off.