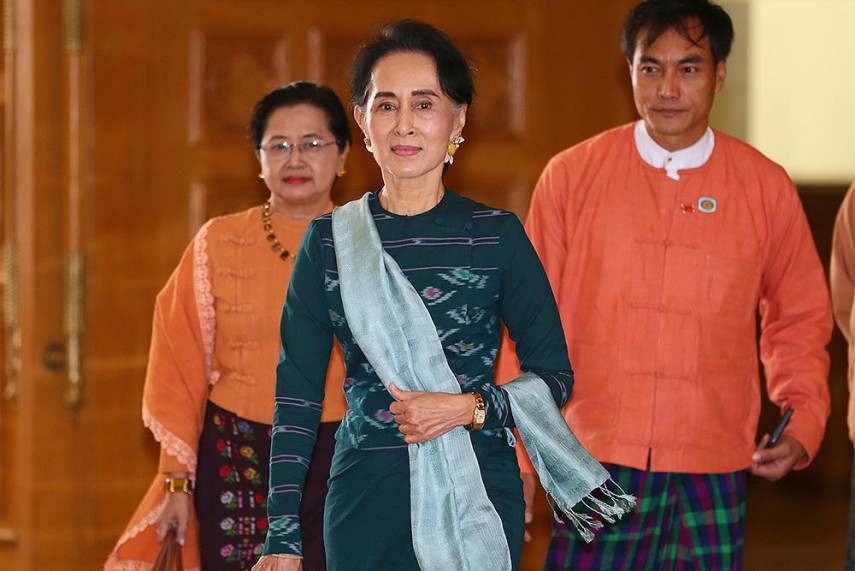 During his meeting with Suu Kyi, Xi pledged that China will "continue to play a constructive role" in promoting Myanmar's peace process and work with Naypyidaw to safeguard peace and stability in their border areas.

For her part, the 71-year-old de facto leader of Myanmar, who was under house arrest for over one and half decade under the Beijing- backed military regime, told Xi that, "We do believe that as a good neighbour China will do everything possible to promote our peace process."

"China, as a neighbour which shares a very important border along which there are many ethnic armed groups, is important in its goodwill," she was quoted as saying by state-run Xinhua news agency.

China is attaching a lot of importance to Suu Kyi's visit and has given her a protocol of a Prime Minister even though she is a State Councillor and Foreign Minister as a result of Constitutional constraints back home.

Her visit comes ahead of Myanmar's hosting of a long- planned conference with armed ethnic groups later this month.

"If you ask me what my most important aim is for my country, that is to achieve peace and unity among the different peoples of our union. Without peace, there can be no sustained development," she said.

China-Myanmar share long volatile borders and Beijing had deployed military at the border last year after five people were killed and several others wounded in firing by a Myanmarese jet while reportedly pursuing Kokoang rebels.

While seeking China's help, Suu Kyi, during her talks with Chinese Premier Li Keqiang yesterday, hinted at addressing China's concerns over the Myitsone dam project in Myanmar which was stalled since 2011 due to agitation by local people.

Chinese Vice Foreign Minister Liu Zhenmin told reporters after the talks that Myanmar's new government has decided to set up an investigation committee to find a solution that is in both countries' interests regarding the Myitsone Dam issue.

Opponents of the dam say the reservoir created by the Myitsone dam would create massive flooding on the Irrawaddy River, endangering ecologically sensitive areas and displacing thousands of people.

There was also criticism over China taking 90 per cent of the dam's power, while nearly 70 per cent of Myanmar has no access to electricity, according to a World Bank report.