World Leaders Must Speak Up Against Intolerance, Racism: UN Chief 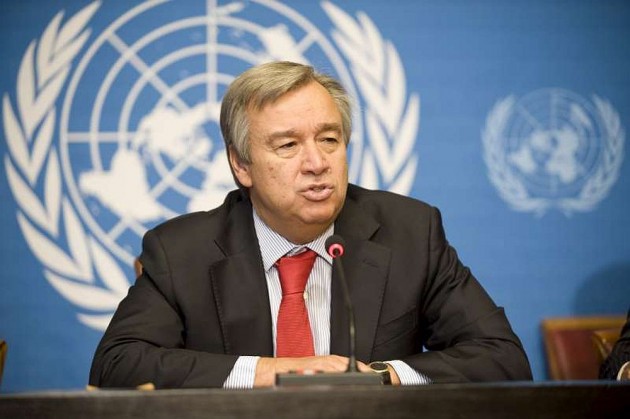 Print
A
A
A
increase text size
Outlook March 22, 2017 16:48 IST World Leaders Must Speak Up Against Intolerance, Racism: UN Chief

UN chief Antonio Guterres has urged politicians and world leaders to "stand up" against intolerance and eliminate discrimination based on race, religious beliefs and ethnicity.

"In a time of upheaval and change, it is easy to paint vulnerable communities as the cause of problems [...] people are being targeted because of their race, nationality, ethnicity, religion or sexual orientation," the UN secretary general said commemorating the International Day for the Elimination of Racial Discrimination at the General Assembly yesterday.

Guterres said international law requires nations to take effective actions to prevent and eliminate discrimination on all grounds and in all fields of civil, economic, political, social and cultural life.

"They must be vigilant and respond immediately and appropriately, including by prohibiting incitement to racial, national and religious hatred and ending racial profiling. And they must uphold the integrity of the international refugee protection regime. Politicians and leaders must speak up and counter hateful speech," he said.

Highlighting, particularly the plight of migrants, women and minorities who are often targeted as "scapegoats" and experience racial profiling by authorities, the UN Secretary General underscored the collective responsibility "to do better" and to protect human rights of all.

"We all have a role to play [...] after all, racial discrimination destabilises societies, undermines democracies and erodes the legitimacy of governments," he said.

"By acting together to end discrimination, we can lift humanity as a whole."

He called on the international community to "stand up" against intolerance and eliminate discrimination.

"Let us join forces in our global campaign – Together for Respect, Safety and Dignity for all," he said.

Marked on March 21, the International Day commemorates the killing of 69 unarmed protesters in 1960 in Sharpeville, South Africa, who were staging a peaceful protest against the discriminatory pass laws of the racist apartheid regime.

Assembly President Peter Thomson said it is challenging to see how far the world is from winning the global fight against racism, xenophobia and related intolerance.

Even though global migration had long been a feature of human history and forcible displacement had driven large number of people from their homes, refugees and migrants too often are met with suspicion, fear and intolerance.

"The world must reaffirm its faith in the International Convention on the Elimination of All Forms of Racial Discrimination and the Durban Declaration and Programme of Action," he said, adding that the Universal Declaration of Human Rights called on the world to fight racism, xenophobia and hate where and whenever it appeared.

He added political leaders must be role models for tolerant and respectful attitudes towards migrants.

Continue FREE with Ads Pay Rs. 1 to Read Without Ads
READ MORE IN:
International
Next Story : What I Do From 7 PM to 6 AM Is Nobody's Business, Should I Stop Earning Now: Navjot Singh Sidhu
Download the Outlook ​Magazines App. Six magazines, wherever you go! Play Store and App Store