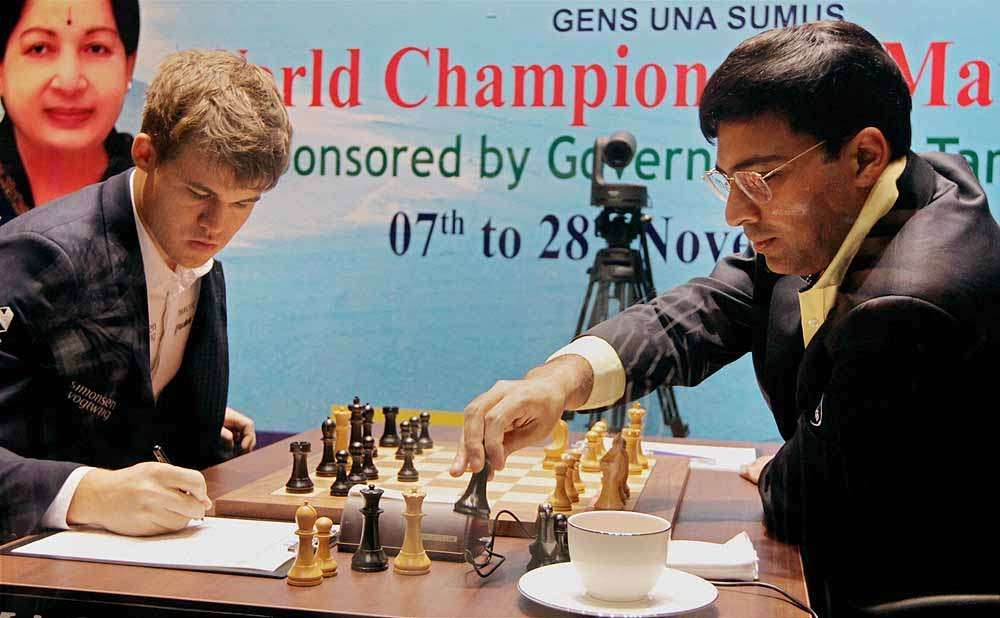 Defending champion Viswanathan Anand could not break through the defenses of challenger Magnus Carlsen and had to be content with a draw in the seventh game of the World Chess Championship here today.

It turned out to be another tame affair after two back-to-back losses for Anand as Carlsen gave nothing away in yet another closed Berlin defense as black, while the Indian went for an early deviation from previous games.

With just five games to go in the 12-game match, Carlsen retains his two point lead with the scoreline now reading 4.5-2.5 in favour of the Norwegian. The clock is now ticking away for Anand as the Indian needs at least two victories in the next five games to level scores.

Carlsen's Berlin defense has already given too many headaches to team Anand and today it was no different. No matter what approach Anand chooses, the Norwegian is always spot on in getting exactly the kind of positions he likes.

Anand went for a knight capture on the fifth move to get a position akin to the Ruy Lopez exchange. The better pawn structure is guaranteed to white in these setups but black gets sufficient counter play with the nature of the position remaining close.

Anand probably wanted to avoid serious complications he has been facing in the endgames in the last two games and hence a better structure guaranteed him level endgames should they arise.

By move 10, two minor pieces had changed hands giving the impression that Anand probably had a slight pull but not much to carry on. Carlsen, to his credit, yet again came with right manoeuvres to ensure that the position always remained close to equal.

On move 15, Anand pushed his king rook pawn to open up one file on the king side but his plan boomeranged as Carlsen, after temporarily allowing a foray on the seventh rank for the white rook, neutralized the optical initiative with timely exchanges.

Both rooks and another minor piece was off the board almost in a blitz and all that remained was a queen and knight endgame with no chances for either side.