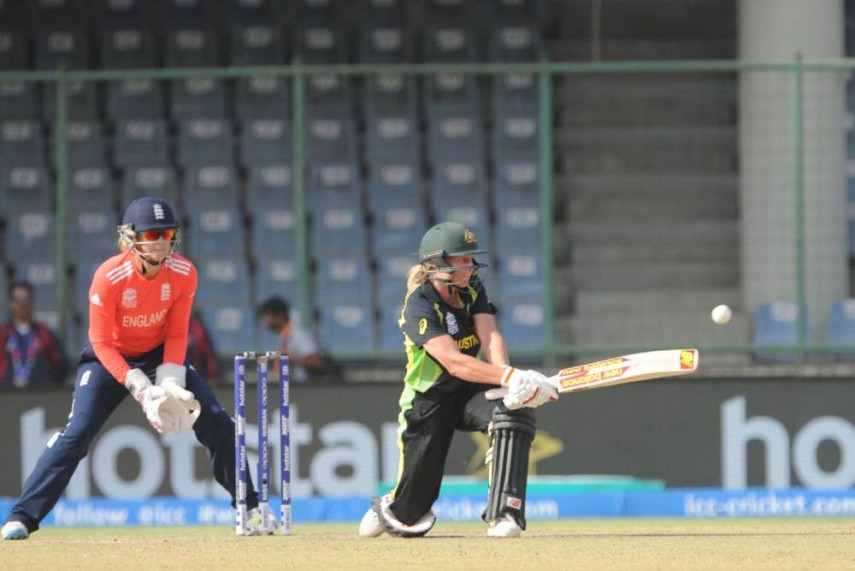 Chasing 133, England were cruising at 87 for one before they self destructed against their fighting opponents to end at 127 for seven in 20 overs.

Put in to bat, Australia captain Meg Lanning (55 off 50 balls) guided her team to 132 for six before the bowlers led by medium pacer Megan Schutt (2/15) pulled off a sensational victory for the team that has pocketed the last three World T20 titles.

England needed 13 off the final over but Schutt bowled miserly to seal the issue for her side. It was hard to imagine an Australian win with the start that English team had got.

This kind of stroke play was seldom seen in the tournament prior to today's game but England openers gave the sparse crowd at the Feroz Shah Kotla plenty to cheer for.

Edwards, the team's leading run-getter in the tournament, carried her sublime touch to the crunch game and was ably supported by Beaumont.

Beaumont started with a fine flick off medium pacer Ellyse Perry in the second over before smashing her for a six over square leg three overs later.

Edwards was not to be left far behind as she combined elegance with innovation. She struck a copybook straight drive with as much ease as she orchestrated a reverse sweep.

It seemed England were running away with the game until Australia got the much needed wicket of Edwards, who was caught cleanly at the extra cover.

With the fall of their captain, England were 67 for one in 10 overs and needed just another 66 from the last 10.

It was imperative for England to keep going after Edwards' departure. Sarah Taylor joined Beaumont and she came out of the crease to smack left-arm spinner Jess Jonassen for a six over extra cover. However, Beaumont was caught at cover off Schutt, giving Australia another window for a comeback.

Another quick wicket of Natalie Sciver meant the contest was alive again and the target was now 42 more runs in the last five overs.

All England needed was some sensible batting to see them through but they kept losing wickets to be reeling at 103 for five from 89 for one.

England needed 31 off the last three overs and target was reduced to 21 off 12 balls, courtesy a maximum over deep midwicket off Rene Farrell.

But the Aussies held on to their nerve even as England crumbled under pressure.

Earlier, a disciplined England bowing effort pegged Australia back after a good start.

Australia were set for a bigger total but England pulled things back brilliantly with tight bowling and two run outs through direct hits including Lanning's.

Lanning once against led from the front, holding the innings together with her gritty knock that comprised six boundaries.

Barring the run outs, England bowlers did not allow the Australians to cut loose in the last five overs, conceding only 34 runs.

Medium pacer Natalie Sciver was the pick of the bowlers for England with three wickets from her three overs, costing 22 runs.